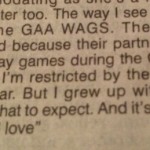 Do you ever notice that things seem to happen in threes? Be it good or bad, it seems that we either seem to get three bad events in a row or three good events. Now, how would you classify these three things that happened within the same hour on Saturday?

I spent Saturday morning finishing off the accounts for the accountant and then got stuck into some housework. The phone rang at 12:55 just as I was planning to have a slice of brown bread and a cup of tea before I got ready to head to Castlecomer to meet the accountant and deliver the ‘hot off the press just completed’ files.

I heard that sentence that means I could be out in the yard for five minutes or an hour or even longer “Can you give me a hand?”

When I went out, the pulley was lying in the yard and Brian was looking for something. I was thinking “oh, no, an early calf and something is seriously wrong.” I find that my darling OH doesn’t waste time or energy on explaining what is going on when he knows you’re going to see it in a few minutes anyway. It wasn’t a calf. On going in to scrape out slurry in one of the sheds, Brian discovered that one of our fattening bullocks in the sheds at the top of the yard had got stuck between the cubicle bars. It can occasionally (perhaps once a year) happen that an animal gets a leg or head wedged somewhat and needs a bit of help getting out again as they just can’t work it out. However, this one had wedged himself so far forward that he couldn’t move. Luckily he hadn’t been there that long but long enough to get fed up and ready to give up on attempting. (If they get stressed enough, plus the position of his head wasn’t great, it could end in death)

We used the pulley and ropes to pull his back legs back and see if that would encourage him to shuffle his body back a bit and get to his feet. However, his tail was caught around the cubicle bar so he just couldn’t move. 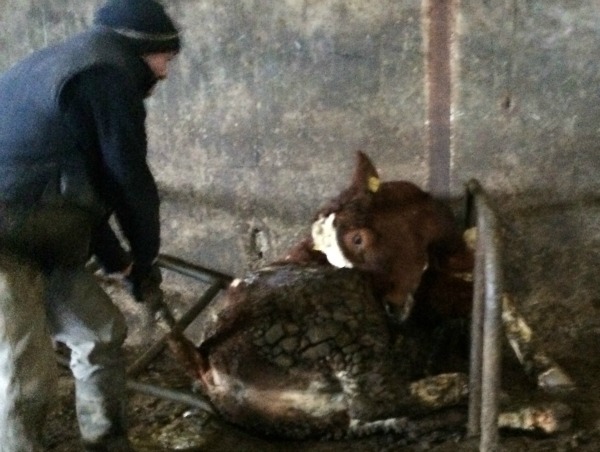 Brian got the loader and using the front bucket, bent the cubicle bars down. We were then able to release his tail but he still wasn’t moving. As you can see in the photo, his tail has just been freed but he had pushed himself so far forward in the cubicle, he couldn’t move. We’d never seen one do that before.

He’s basically saying “My tail is numb, my bum is numb, my legs are stiff, can’t you make a bit more of an effort?”

I was thinking “I’m keeping my distance, if that leg lets fly it could break my arm.”

We had to attach the rope to his lower back leg again to winch it back and from that he staggered up. The only problem then was the rope was still attached to his leg. We cut it at the other end but the rope hadn’t been long enough to do an easy to release knot. We were going to have to get him down to the cattle crush to take the rope off.

Rather than bring him down to the main chute further down the yard as it would have meant moving a lame animal in a shed beside the chute, we decided to bring him to the old chute in the next shed just below. However, the bullocks and single bull in with them had to be fastened into their cubicles. Brian reversed the digger out of the cubicles and left it in the outer shed.

In the lower shed, the bull and bullocks were all lying on a cosy straw bed squashed together happily like seals sunbathing on a sandy beach (as that silo is empty, we give them a straw bed there so they are more comfortable than lying on the concrete cubicles). Brian called our dog Sam but although he’s a brilliant dog, he has one failing, he loves running water. Will was powerhosing around the house so Sam was down there and couldn’t hear him.

Brian went walking toward the silo to move them out and into the cubicles.

The bull stood up and you could see him saying to himself “Who do you think you are? Do you think you can come in and tell us what to do when we’re lying here comfortably? Huh, I’ll show you.”

Now some would argue that if you stand up to a bull, they will back down. If you back away, they will become even more assertive. Always err on the side of extreme caution when it comes to bulls in our opinion. This guy is young and will be going to the factory soon. He won’t have much more time to play at being assertive in any case. Even though Brian had a pitchfork in his hand, he decided the bull looked a tad too assertive to have a conversation and walked to the nearby gate, and I ran down to the house to get the distracted dog.

Once he realised there was work to be done, Sam raced up the yard. Naturally enough, I couldn’t keep up with him but next I heard a loud grating noise and a shout from Brian.

He had left the loader in gear. A bullock thought to himself “Hmmm, that looks handy for a nose scratch, I wonder what it tastes like too” and stuck his head in the open window, and then “oooer, I’d better get out of here or I’ll be blamed for this” as he knocked the loader into reverse and it, yes, reversed! Luckily it hit against the heavy and partially filled feeder which shunted a couple of feet and then forced it to stop.

Anyway, back to the bullock with the rope. Sam moved the bull and bullocks out with little effort and they were fastened in. The bullock was separated from the others easily, he went into the chute happily enough, we cut off the rope and returned him to his comrades, looking not too worse for wear after his long morning.

My hands were covered with muck, my leggings had muck splashed across them in large dollops and I was going to be late. But no matter, as I drove to Castlecomer conscious that the strong scent of soap from my hands didn’t really cover the smell of muck, the bruise-like sweet smelling stains off my legs may still smell even though I’d washed my legs and my leggings were clean, and I was braless (when I got dressed that morning, I hadn’t put on a bra as was expecting to shower and change before I left),but  I remembered that I was a WAG. I could carry it off! 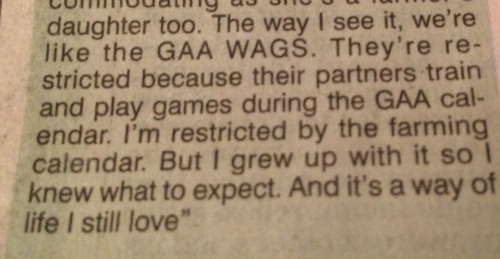 Yes, I did check the definition when I read this extract (and laughed heartily), a WAG is “a wife or girlfriend of a sports player, typically characterized as having a high media profile and a glamorous lifestyle” but hey, can a farmer’s wife be a WAG? From now on whenever I’m covered in splashes of muck or sweating from trying to feed a newborn stubborn calf, I’m going to put my head high and tell myself that some people just might see me as a WAG! Obviously I didn’t ask anyone if they agreed with me but you never know. 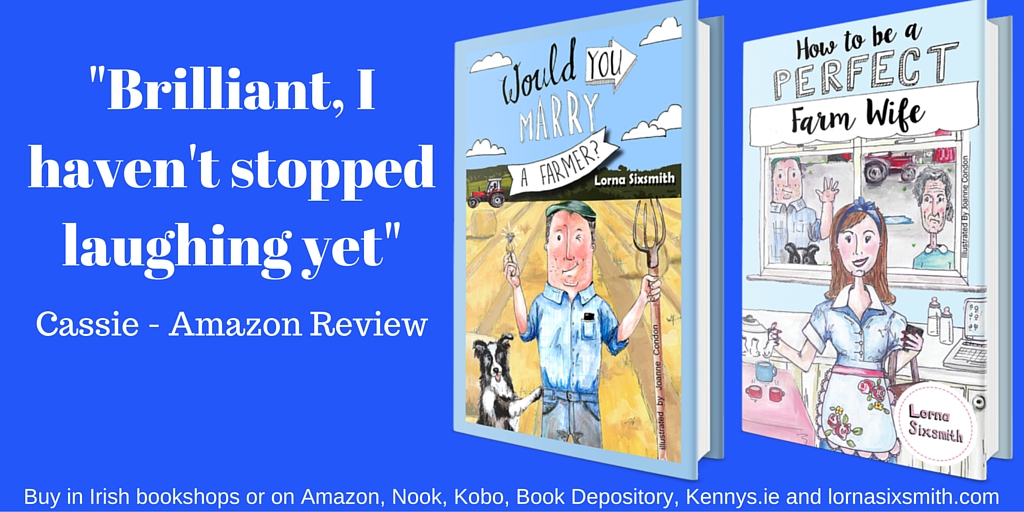