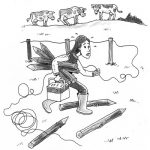 There are certain things that are common in farming households all over the world or perhaps some of them are isolated to Irish farms? Anyone else find these things happen to them?

#1. If a farm wife ever wants to summon her husband, all she has to do is sit down for a cup of tea and a slice of cake. He is bound to arrive in to the kitchen within ten minutes and say “Is this what you’ve been doing all day?”

#2. You know it’s calf rearing season when you rush off to collect a child in your farming clothes hoping you won’t have to get out of the car when you get there. You don’t but when another parent comes over to say hello and you lower the window, you realise how bad your own clothes smell when your nostrils are assauged by fabric conditioner. You sit as still as possible hoping the fumes of sour milk and muck aren’t travelling in her direction.

#3. I struggle with cling film so whenever I’m asked to take up or move a temporary fence, I know I have a challenge ahead of me. And yes, when asked to collect temporary stakes, the wire and the battery fencer a little while ago, well, the stakes and fencer made it back okay but let’s just say the ball of wire hasn’t been used since. Two out of three isn’t bad I guess. 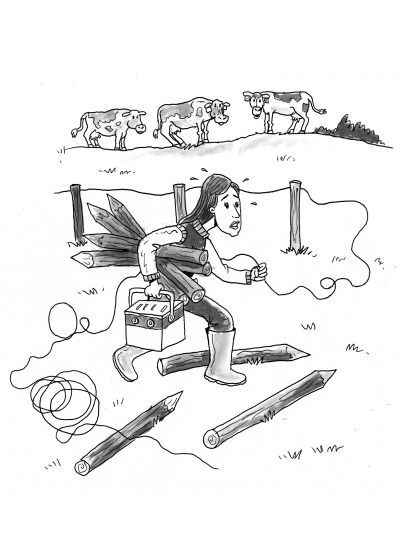 #4. You’d think we’d have telepathy or at least an understand of each other’s language cracked after 24 years of marriage wouldn’t you? Our dinner can be at any time between 3 and 6:30 depending on what’s going on with the kids as well as the farm. One Saturday I texted Brian around 3pm to say “dinner at 3:30” and a reply came back “no later”. I interpreted this to be “No, make it later” and turned everything down. After about ten minutes, I texted him back to ask what time and then realised that he meant me to try and have it before 3:30 if possible, “no later” than 3:30. Yes, he likes potatoes half cooked – just as well!

#5. I suppose I could claim that I have Brian well-trained when he came into the scullery the other day and hoovered the socks on his feet before walking into the kitchen and living room. He had been sawing a tree and was covered with sawdust. A perfect farm wife or an ideal farm husband?! 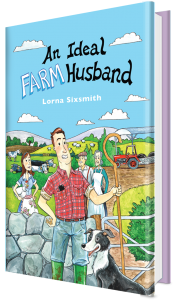 My third book An Ideal Farm Husband is now available on Amazon. Just to let you know if you’re thinking of buying the paperback as a gift, you can get the kindle version free with it.

My husband can't sleep at night because I'm giggling so much while reading it 🙂 https://t.co/eQaVDaloXy