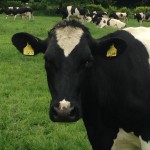 There’s a section in my book Would You Marry A Farmer? where I advise farm wives on the necessities they require when helping out on a livestock farm. They include a belt on your trousers, wellies and a sports bra. But what happens when you don’t have time to put them on?

7am and I was flitting in and out of sleep, the radio alarm had gone off but I didn’t really hear it. Brian was up a while so I had the whole duvet to myself and I’d snuggled down for another half an hour of shuteye.

Next thing Brian bursts into the bedroom telling me he had rang my mobile and the landline about five times, calves were out and he thought some were on the road. As he raced back out, my brain and my body got into gear as I dashed to the bathroom and debated whether to just pull a jacket over my pyjamas or not. No, he mentioned the road, I’d better get some clothes on. I pulled on a pair of leggings and a top, ran down and grabbed a jacket stuffing my feet into wellies. 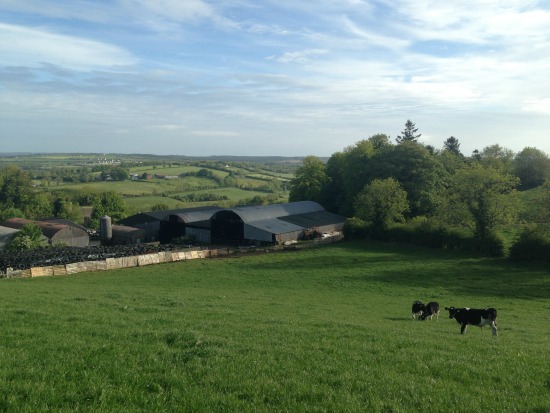 View from the top of the hill where the calves were

We had only let the calves out the day before. Ridiculously late but between cold weather, then putting in silage in the silo beside their field and we thought the machinery would spook them, to a bad forecast and things were delayed by at least three weeks. 85 of them had seemed happy enough the evening before but something had spooked them and a numer had tore through a fence at the bottom of their field, 3 went into Lynups Hill, one ended up on the Lawn (more of a bog than a lawn to be honest) and a good few had tore through another fence into the field called ‘top of the letterbox’, down the hill to where the fence was weak (where a silage bale had taken out part of it only a few days before), into the field below and a few had got out onto the road. Brian had noticed cars slowing down as he had put gates across the broken wire to stop any more getting out.

Off we went in the car, not sure how many we were looking for. ?We drove to the church which is about a mile and decided there was no way calves would have walked or raced that far. There’s a byeroad near us, opposite the field, which has become a cul de sac as the council can’t afford to mend the bridge so we peered down there and no sign. Drove around to the other side of the byeroad, still no sign. Brian went to reverse to get out of there and I decided to walk past the boulders and he could collect me back at the other side. After a couple of minutes I spotted three calves lying down, clearly exhausted, in a gateway. They looked at me as if to say ‘are you really going to get us to move?’ to which I replied ‘You’d better not run as I have neither bra, belt or socks’.

We got them back into the other field where they joined their comrades. Still flighty, we counted them (16) and left them to settle for a while. We retrieved the calf from the Lawn and on bringing him up the yard, we were startled to find another calf in the yard. Where had he come from? When moving calves around the previous day, one gate on a pen hadn’t been secured properly and he had just escaped from there! He was happy enough to return to the company of the others. 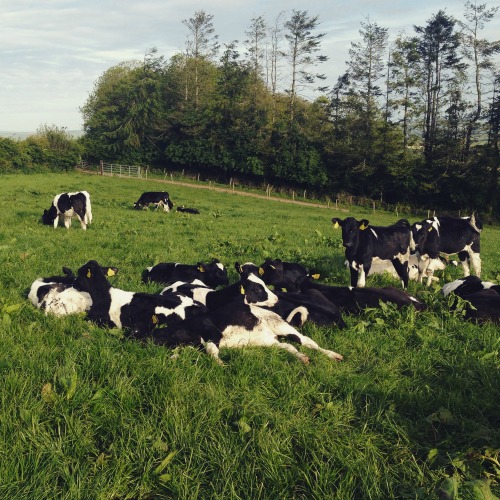 It was with trepidation that I counted the rest of the calves. Most were at the top of the hill, many fast asleep so goodness knows what had spooked the ones that fled. There was quite a strong scent of badger around the meal troughs so unless they had scared the. Much to my relief, there were 65 calves so all were safe and sound.

Our calf adventures weren’t over yet. Later that day, we went to retrieve the others. The sixteen calves in the Letterbox came in quietly, trotting along and glad to get back to their comrades. It had simply been too much of an adventure. The three on Lynups Hill ?were on the other side of the car road to the Lee where the cows were grazing – we were conscious that retrieving the three calves might upset the cows and set them mad so were taking it quietly. Suddenly, about twenty cows went flying down the hill to the bottom of the field (we have a lot of hills by the way) and next thing I saw Brian heading after them. I rolled under the wire and climbed over the gate, wondering what was going on as Brian was waving a stick to stop the cows getting to something in the hedge. ‘Surely we didn’t miss a calf and it is in the other field’ I wondered.

We had a late calving heifer who had miscarried last year. It was either a case of culling her or giving her a chance to get pregnant again, albeit with a late calving so we gave her the chance. She was due any day and as she was so so late, Brian had her with the milking cows but had meant to keep her in that morning. She had just given birth and as the hill was so steep and she was so close to the dyke, the calf had literally slipped out of her and down into the dyke. These twenty cows wanted to be its adopted mother! I kept the cows back while Brian struggled through the briars to haul the poor calf back up. He didn’t look too worse for wear thank goodness. His mother was nearly going mad and as she was a heifer, we had to be careful in case she decided to attack us. We left him to her and scarpered!

Bringing in the cows that evening was fun, we had to tell the dog to go hide as the cows could have attacked us and the dog if they felt the calf was being threatened. At least ten were playing adopted mother and he had sucked two of them – so much for getting the biestings from his mother into him! It was slow progress but we got them all along, the calf trotting rather bemusedly. 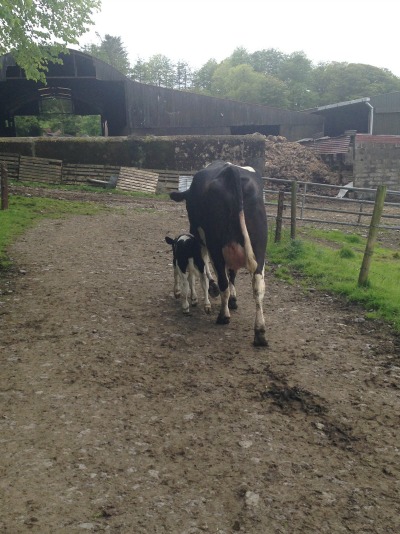 Dairy cow and her newborn calf

An eventful day for our last day of #calving15! And now I make sure the landline phone is on the charger in the hall so I have a hope of hearing it. I never bring my mobile to the bedroom, leaving it to charge downstairs. We used to have a dialling box in the kitchen that was so loud it would wake the dead every time the phone rang so we disconnected it. Maybe that wasn’t such a good idea!