It’s been an interesting farming week at Garrendenny in terms of the calves born. At exactly the half way mark of 65 calves, 40 dairy heifer have been born (plus three Hereford cross heifers) so it’s an excellent ratio for us. As dairy farmers, we prefer heifers – they are higher value and it gives us more choice in two years time regarding which ones we want to keep in our own herd (we sell the others to other dairy farmers). We’re at 77 born now, 44 are dairy heifers as we had a little run of bulls. Amongst those bulls though there are a couple that might be ones that AI companies might be interested in – time will tell. The first up was “George”. Occasionally a calf is born that really stands out and it happened this week. They all have glossy coats but he is just shining. He is tall, broad, glossy and when he stands up, he just plants his hooves straight on the ground, legs abreast and looks such a fine calf. He?s almost like a stallion amongst geldings or a thoroughbred amongst ponies. George is a Sixsmith family name so I decided to call him that. I really hope one of the AI companies test him, would be interesting to see how he gets on. 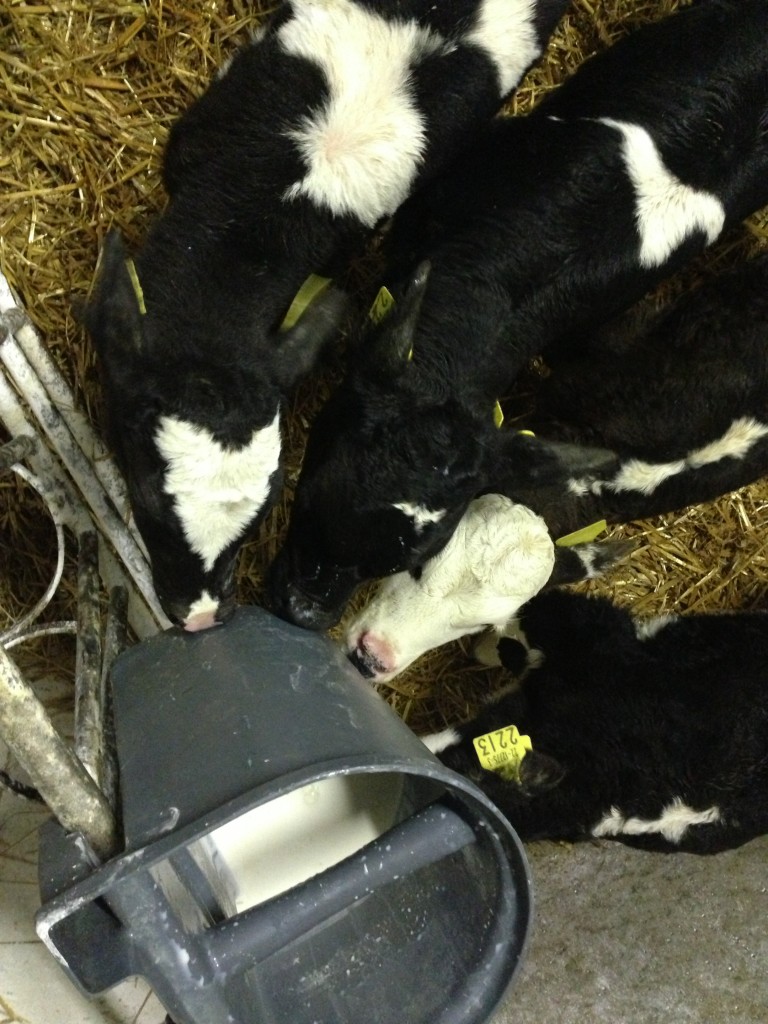 Unnamed, George, Victoria and Benny – all feeding well on a 5 teat feeder

Guinevere, our best heifer calf from last year, now has a baby half brother. An AI company provided us with the semen from a high EBI bull and we have signed a contract to give them first refusal if they want the bull calf for AI. Here?s hoping he will be tested and it would be great if he ends up being purchased. ?10,000 would be a very nice additional to our income this year ? it would be a pity too to send such a high EBI calf to the factory! I haven’t taken a picture of Arthur yet as he got poo on his face this morning ?Nearly expect him to have a halo over his head having such a good EBI compared to his peers but no, he got poo instead!

(By the way, AI stands for Artificial Insemination and EBI is for Economic Breeding Index. We milk record our cows and each bovine has an EBI score based on the quality of their milk, fertility, calving ease, health, beef as well as other factors. The parentage affects each calf’s EBI until they are old enough to provide milk themselves, or if a bull, have daughter proofs).

We don’t name all of our calves by the way, just ones that stand out for one reason or another plus our daughter insists on naming the first half dozen every year. It’s handy naming one of the calves in occasional pens as it makes it easier if we need to tell each other something about the calves in that pen, easier than saying, second last pen, or middle pen in x shed. For example, we have Barry and friends (Barry was born the day I got the gift of teabags!), Harriet and friends, Becky and friends, Henry and friends, Henrietta and friends, George and friends and now “Little Guy” and friends. This calf was being delivered backwards last night so we ended up pulling him before heading to a wedding party. His body is completely normal but he has the shortest legs we’ve ever seen. Here he is (in our dark stable hence needed to use a flash) beside a normal newborn. His legs are at least 4 or 5 inches shorter than normal. 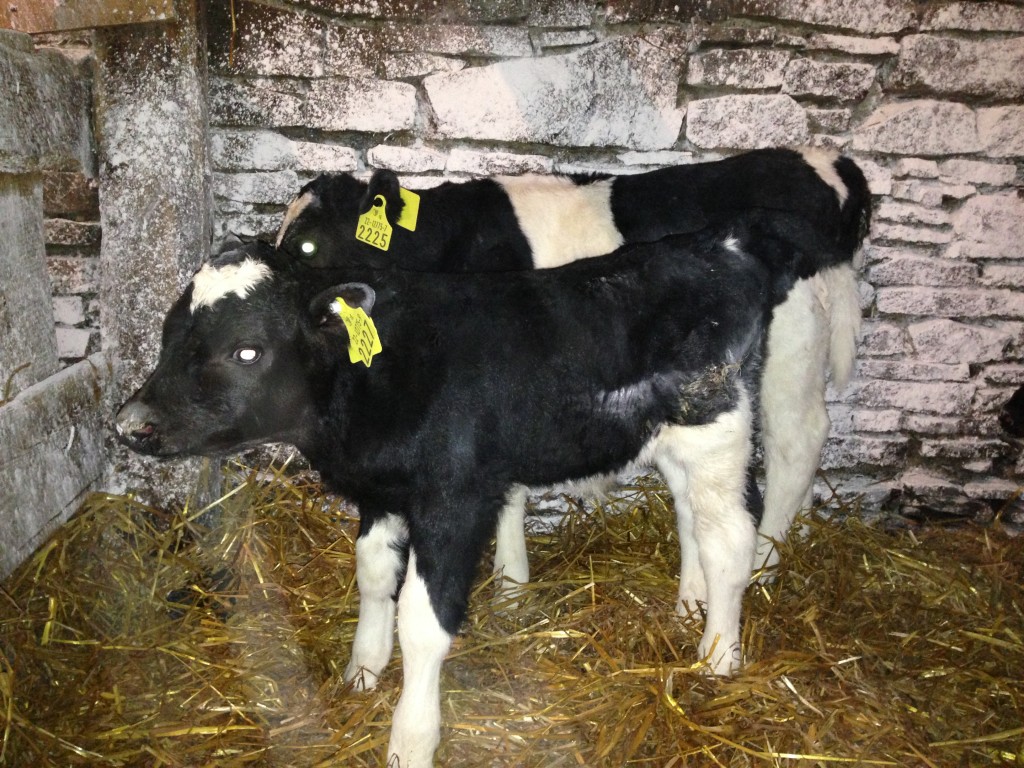 Hereford Cross twins were born too. The poor cow was under pressure for the few days before she had them and no wonder. The heifer came out first, a nice sized calf, certainly not small. She was followed by her sizeable brother who is larger than many of the single born calves. Both were hungry when they came out. The heifer started to suckle almost immediately. The bull went walkabout and I found him after half an hour out in the feed passage as he climbed through the feed barriers and he drank 3 litres of colostrum very quickly.? The kids chose the names for these two. The bull is Benny and the heifer is Victoria. We’re giving each of the kids a calf, we always got a calf a year when we were kids. Back then, they were sold for about £150 each. My sister used to keep changing her mind regarding which calf to take, she’d opt for the cuter calves which were never as profitable as they were smaller!

We had a lot of problems with crypto last year. It’s a difficult disease to cure, the calf develops a severe scour and can become dehydrated and lifeless very quickly. Even with the cows being vaccinated for everything you can throw a hat at, getting all the colostrum into the calves, disinfecting the shed, using lots of straw daily, cleaning buckets and feeders, once crypto is in a place, it can be very difficult to keep them healthy. We are using Halocur this year, it costs €10 per calf and involves dosing each calf with 8ml a day for the first seven days.We use a little white book to record which calf is born to which cow as well as ease of calving, name of sire and other data. Our little white book is more important than ever as the dates of dosing them are recorded there too. Most are very docile to catch and dose but by the sixth or seventh day, some present a challenge. The Hereford crosses are particularly lively, probably due to the hybrid vigour. 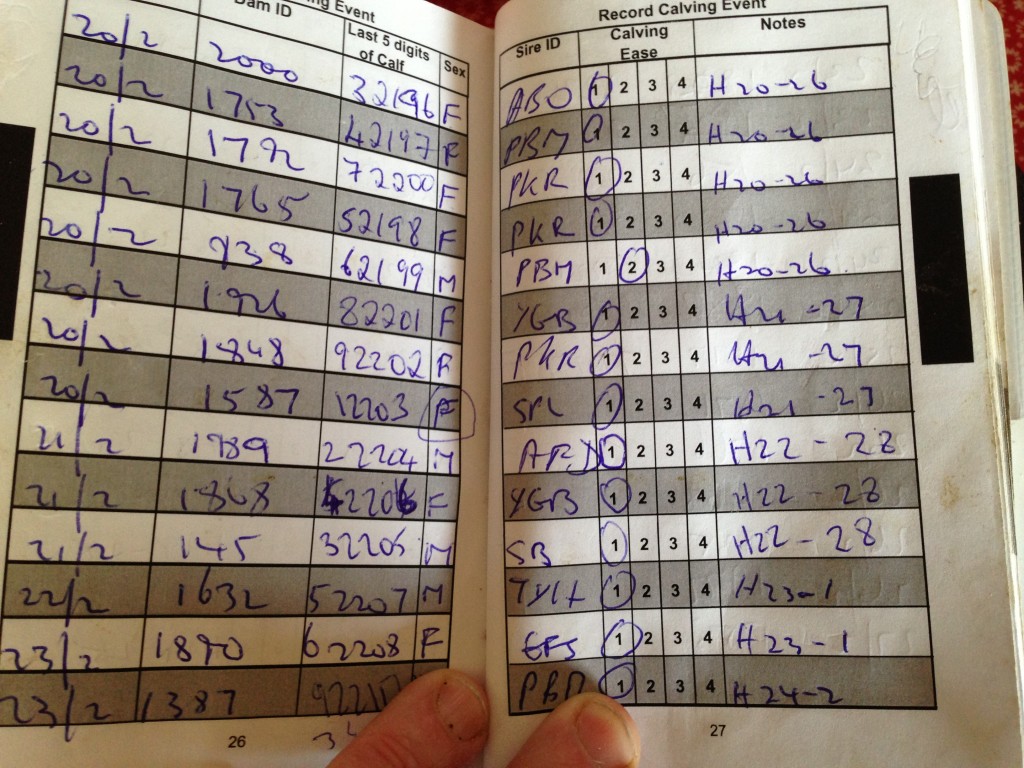 We?re feeding all the calves via teat feeders this year. As newborns, they either suckle the mother or are fed colostrum via a large bottle. They are usually fed with the bottle for two or a maximum of three feeds before they are expected to be able to drink from the teat feeder. Some will suckle from it straight away, others need to be shown how. Sometimes it is just a case of dipping my fingers in the milk, letting them suck for a moment, guiding them up to the teat and giving them a gentle push. Once they taste the milk coming into their mouth through the teat, they are usually fine. Occasionally though, a calf just does not recognise that milk will come out of the teat. It can be a case of holding the mouth open, positioning the teat in it and keeping one leg behind it so that the calf can’t back away, tough going if it’s a long calf and I’m not overly tall! If that fails, it?s a case of giving them a little via the bottle and hoping then that the 2 + 2 will make 4 when they are introduced to the teat feeder again. We put them in 2s / 3s / 4s initially, depending on how many are born in a day so that they are learning to drink at the same stage. Then once they are all happy and feeding well, they are moved into batches of six. 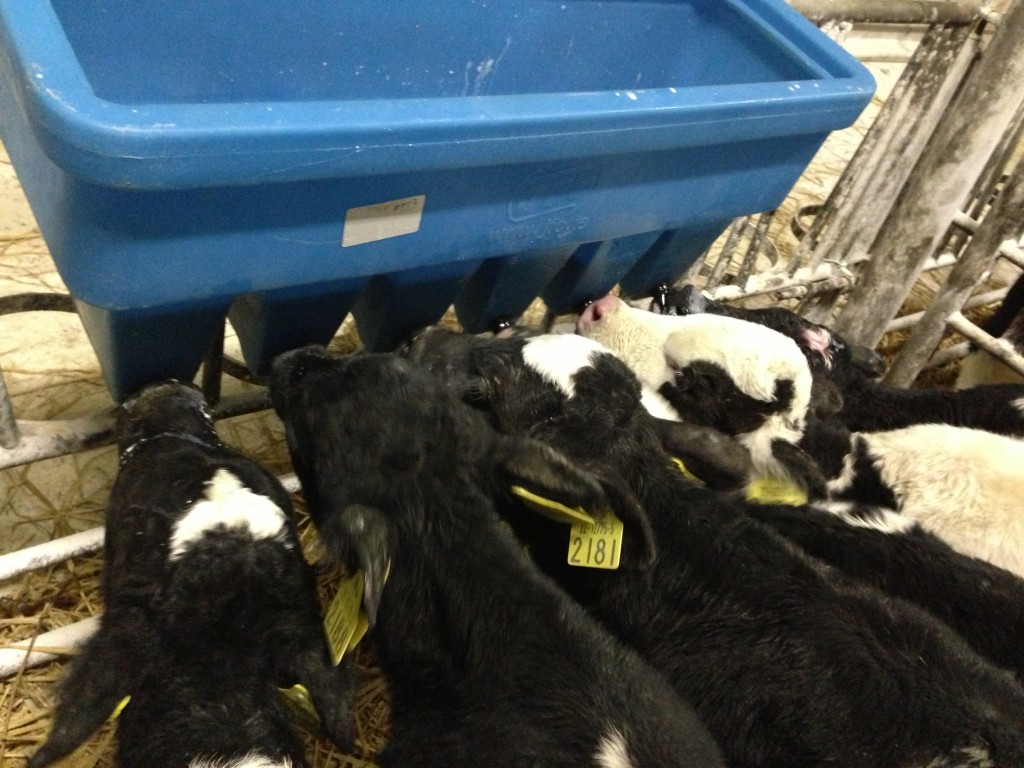 There’s been plenty of dancing in the parlour! The heifers are being milked for the first time and it can take them some time to acclimatise to coming up into the parlour let along having the clusters placed on their udders! It is always the quietest heifers in the field that are the nightmares in the parlour, partly because they are quiet and not skittish in the field, they aren’t afraid of the farmer so it can be hard to persuade them to move on up to be milked. The easiest way to milk them is to sandwich the smaller heifers between the larger, more mature, “seen it all before” cows as the older cows have a calming influence and their increased size makes it harder for the smaller heifers to move around. 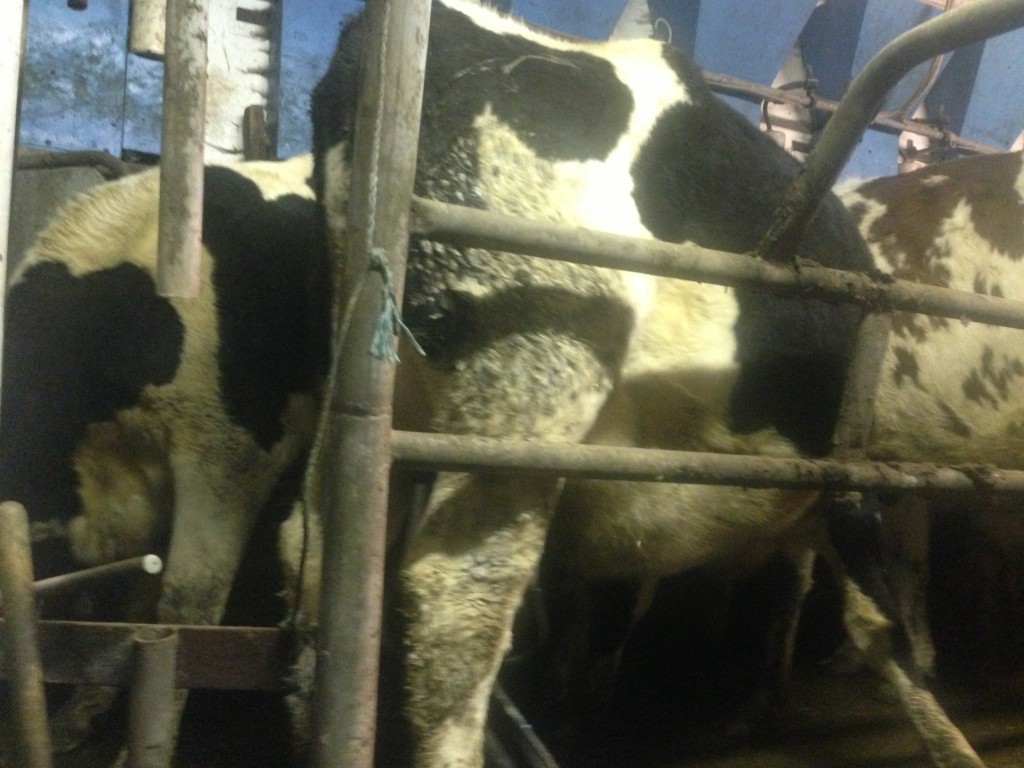 Some of them still manage to turn around and will be milked facing backwards! Kicking bars which fit over their hips or rope to tie the legs are all brought in to try and limit their kicking and get the milk out of their udder. Nellie, a daughter out of Garrendenny Lucifer, was a crosspatch as a calf but has shaped up to be a lovely little heifer. Nice udder, giving a good amount of milk and no problem getting her into the parlour as she’s a greedy little guts and can’t wait to get some sweet tasting nuts.

I went down to the creamery during the week to pick up the two teat feeders we had ordered. I am often amused by the expressions used by farmers but today I didn’t get to eavesdrop as I knew a couple of them and started chatting. Our creamery is only a mile away from the farm so it’s convenient but it’s surprising just how busy it can be sometimes considering we live in such a rural area. There were plans to close it a few years ago. Castlecomer creamery (5 miles away) was being rebuilt on a new site and was being transformed into a “fancy” creamery, no more would men be going in in their dirty wellies, having a chat with other farmers or even having a cup of tea with the sales staff when they all had their tea break. This new creamery is sparkling but much more official. More the place for yummy mummies to buy their garden plants than farmers to pick up farm implements. After a protest by a number of farmers, coupled with the fact that Crettyard creamery became more profitable, meant that our creamery stayed open. Farmers stand around and chat as they wait their turn in line and yes, they’ll continue conversations too as they make their way to their car, jeep or tractor. It’s much more than a retailer, it’s a place for farmers to catch up on the news,be it how much milk quota they all have left, how the calving or lambing is going, whether cattle are out at grass yet and all the other subjects that make a difference to the day of a farmer. 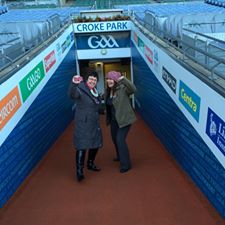 Through the tunnel at Croke Park

I went to Croke Park for the first time this week. Amanda (my partner in crime of We Teach Social) are planning an event for later in the year and are considering Croke Park as a venue. We walked through the hallowed tunnel, I tried to feel important as well as impressed but failed miserably. The pitch is also hallowed grass – each blade of glass has to be the same height, width, thickness, you name it. It’s not just farmers that do grass measuring. I’m not sure why it has to be so precise – would a slightly higher tuft of grass at one end disadvantage one team over the other as they try to get the ball over the goal? I got home at 7:30 and out at 8pm to feed calves for an hour – 5 newborns that all needed bottle feeding.?Who would marry a farmer??!

That’s my farming week for this week – join me next weekend to find out what happens at the dairy sale in Kilkenny mart, more births, some multi-tasking and probably plenty of unexpected surprises.

4 thoughts on “My Farming Week – Cows, Calves, the Creamery and Croke Park”