I love reading about field names. They provide so much information about the size and shape of the field; the type of soil; the surrounding vegetation; the people who were there before us. Books have been published detailing the names of fields (e.g. The Field Names of Country Meath) in some counties as researchers and publishers realised that as land is sold, this important part of our heritage is being lost.

Some of our fields are named after tenants, before Sixsmiths farmed here. Garrendenny was once an estate of about 900 acres and tenanting families each held a field or two. Bakers Hill sits between the top of the farmyard and the Garrendenny Lane. It’s a steep hill with a flat section at the top. It doesn’t have the same “I’m on top of the world” vibe as its neighbouring fields, as it’s more sheltered from the wind and its main view is of the farmyard, rather than a patchwork of fields stretching into the distance. 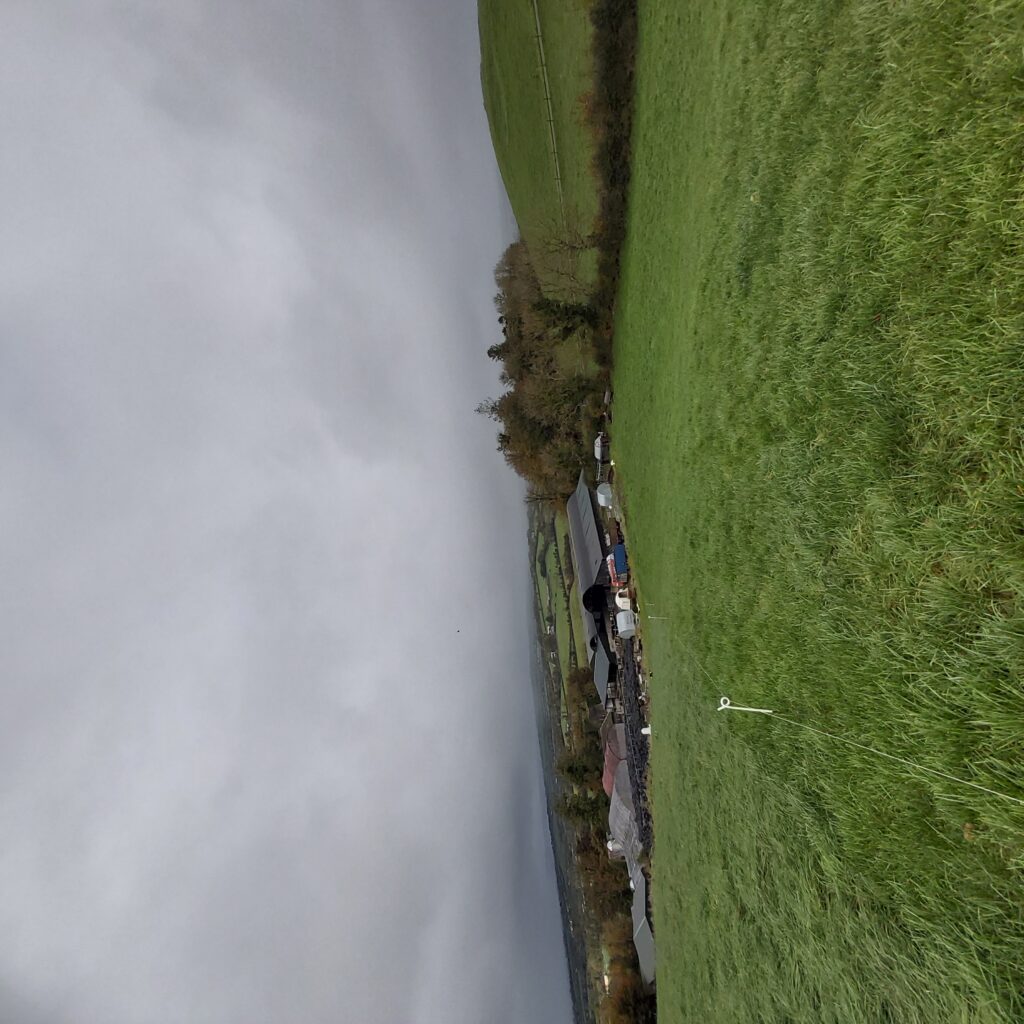 Bakers Hill. Can you spot the castle in the middle of the farm buildings?

Bakers Hill was named after a tenant family. They were evicted in the 1880s by the owners, the Warrens who owned Garrendenny from 1876 to 1904. The Warrens weren’t the best loved of landlords! The land of Bakers Hill was steep and was mostly given over to the growing of oats and potatoes and the Bakers probably worked in the local coalmines in addition to farming. Like other estate owners of the time, the Warrens set about consolidating the estate by clearing away uneconomic holdings and unprofitable tenants. Some evicted tenants were re-instated in other farms after the Land Acts of 1902–03, others emigrated or stayed destitute. The Warrens evicted other families at this time too: Michael Bergin of Garrendenny and a Sixsmith widow and her family from nearby Kilgorey. They tried to evict the O’Neill family in Kilgorey but as they had the house and one field from a middle landlord, they refused to leave and held out until the Warrens reached a compromise. 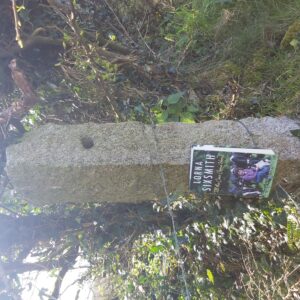 A single granite stone post remains to indicate the gateway from the public lane into the field and to the Bakers cottage. As we don’t use that exit any more, it is all blocked with hedging and the post is hardly visible from the lane.

Up to 1969 when the local coalmines closed, the lane was a busy thoroughfare of farm labourers, farmers, miners and carmen, travelling from small cottages to work and to the creamery with their milk, or to the mart. There were quite a few dwellings along the lane, all but two are gone and neither of those two are lived in now.

The lane provided a short cut from Kilgorey to the two schools and the two churches (Church of Ireland and Roman Catholic) in the townland of Mayo. There was also a small shop at the end of the lane.

My great-grandfather Joseph Sixsmith died on Bakers’ Hill in 1951. He was clearing away stone that remained from the Bakers’ derelict stone cottage when he had a heart attack and was found there some time later. As a part-time builder as well as a farmer, I’m sure he would have been pleased that, if his time was up, it was while working with stone on a hill with a view of the farmyard and surrounding fields.

My favourite memories of Bakers’ Hill are of December 2010. Heavy snow had fallen and we were snowed in for two weeks. The milk lorry had struggled to get up and down the avenue so we’d dried off the cows a week early. The landscape was completely white with dark skeletal trees standing proud amongst the snow-dusted hedges. In the absence of proper sledges, we used the two halves of the children’s plastic sandpit, the type that had a lid to keep out cats and other animals. We tied ropes to the handles which made towing them up the hill fairly easy. Each of us fit in with a child and had races down the hill. Then the children wanted to sledge on their own. We had our hearts in our mouths when we realised our absence made the sledge go so much faster and Kate’s sledge was flying towards a ditch with a barbed-wire fence. Luckily it swerved to the left and came to a stop on the flat surface. They didn’t get as big a push-off the next time! 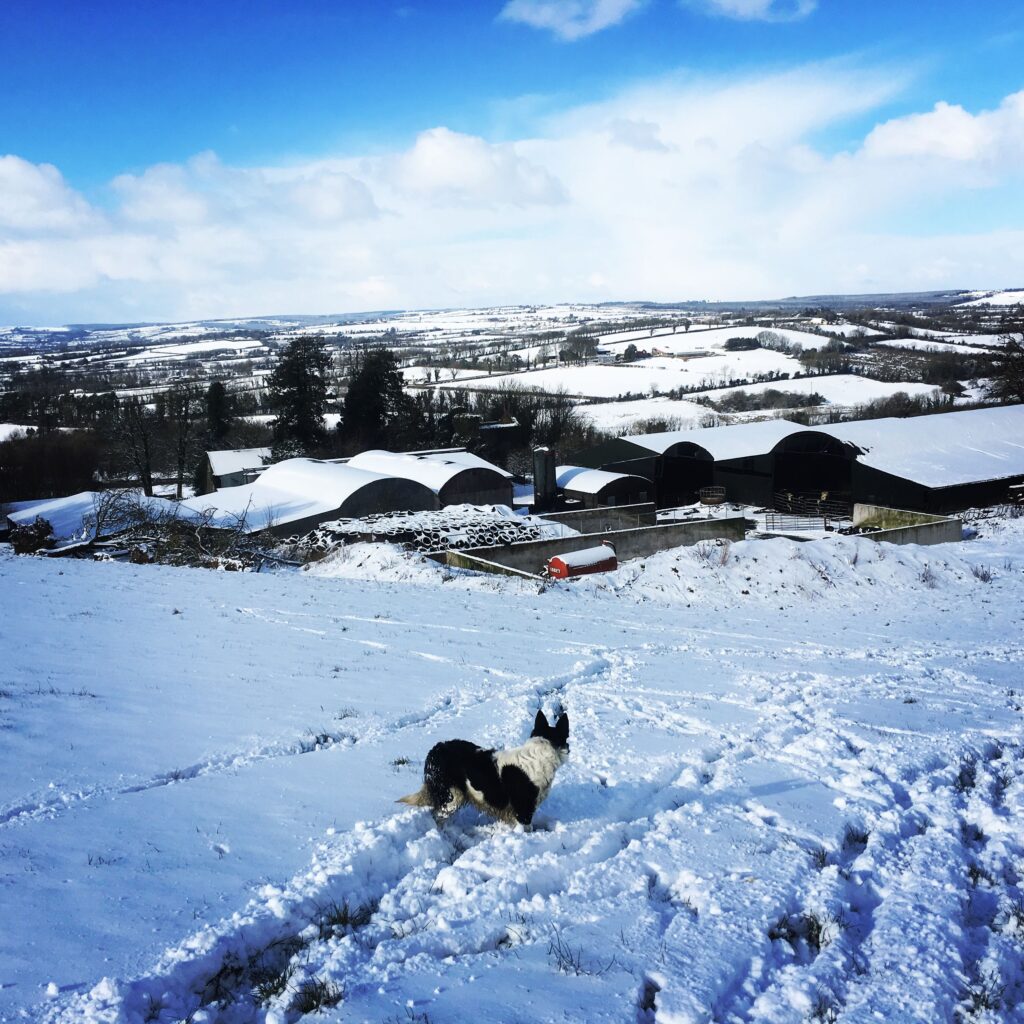 There are more stories of our fields in my memoir Till the Cows Come Home which was published in 2018. I’m very grateful to the farmers, authors, bloggers and reviewers who provided reviews. Here’s one from Will Evans:

To sum up, the book oozes warmth, humour, wisdom, and love, and is written in a way that makes it both fascinating and entertaining for farmers and non-farmers alike. I’ve read many books written about farming lives over the years, but this might just be my favourite. If I could write, this would be the book I’d have written myself. So If you want to escape the hectic modern World for a few hours, put down your devices, make yourself a cup of tea, and pick up a copy of ‘Till the Cows Come Home’ by Lorna Sixsmith.