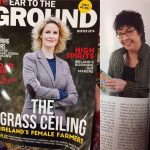 I don’t tend to look back very often. Usually at this time of year I’m starting to make plans for the next year, not in a new year resolution way but setting out what I want to achieve. It often includes weight loss but I think I’m eventually getting sense about that one! I did lose weight in 2016, during the calving season, and then put it all back on again during my “writing season”. Yes, my brain tends to cry out for cake or chocolate and tea after a couple of hours of writing or editing. 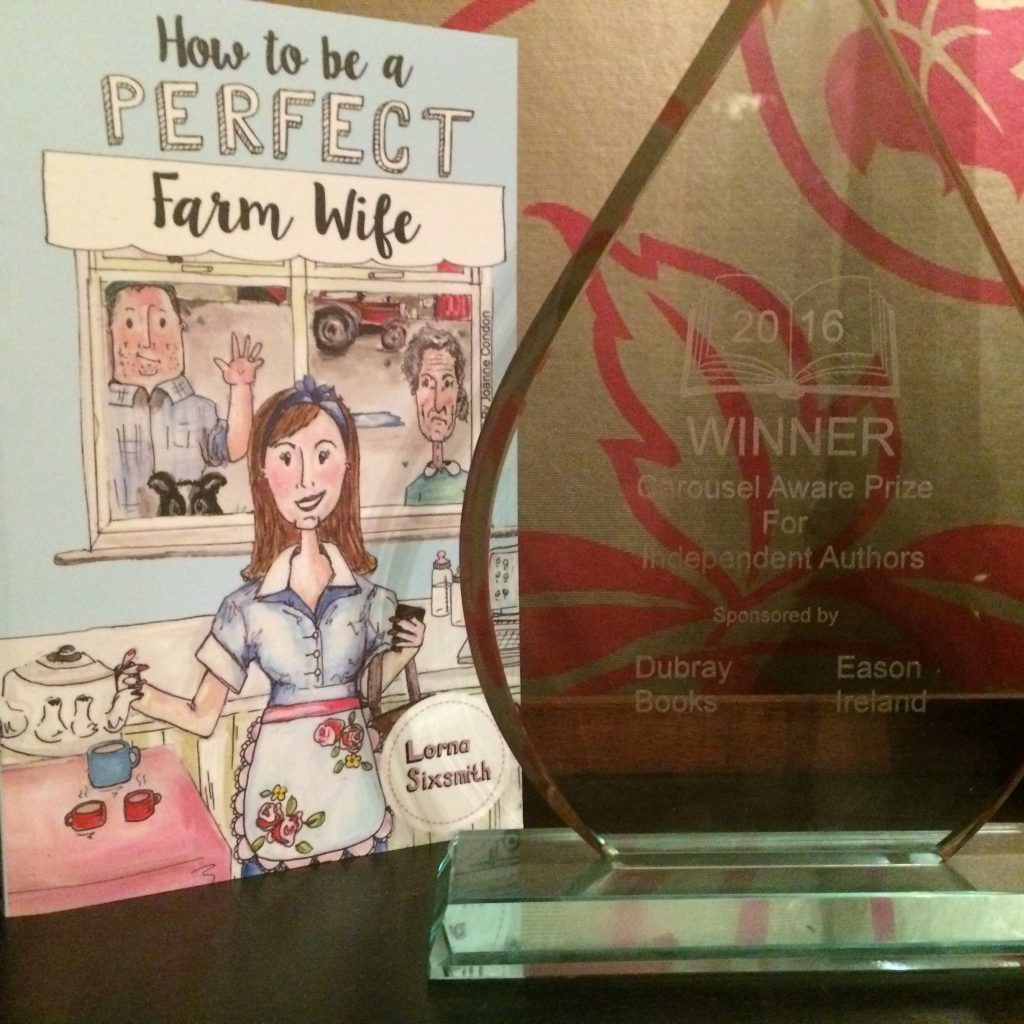 It’s been a good year. Lots of positive things happened with one of the highlights being winning the Best Nonfiction award at the inaugural CAP indie book awards.

It doesn’t feel like it has been an easy year though. Thinking back to the spring makes me squirm as I recall the feelings of stress when trying to complete the transfer to a company to a tight deadline on top of a busy calving season. But we got through it.

We got a good start to the year though with a good holiday in Lanzarote. Lots of reading, relaxation, eating, walking and cycling. I remember when we went on our first sun holiday and the kids were so amazed to see Brian reading books. They must have thought he was such a philistine in comparison to me being a total bookworm. 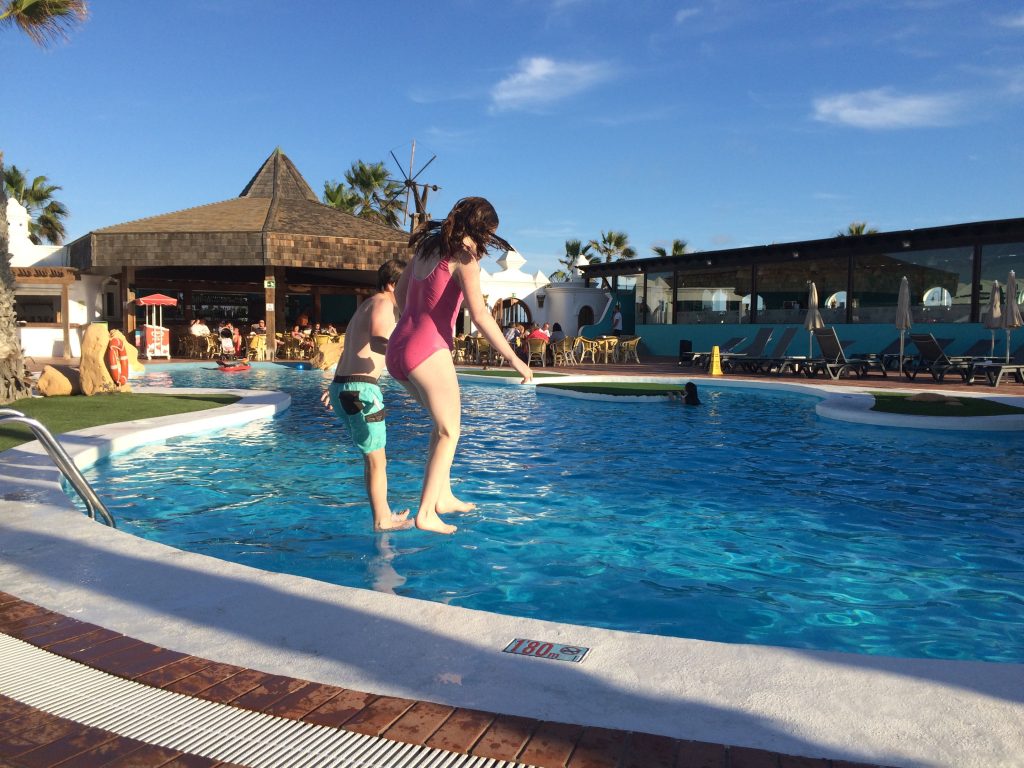 The kids learnt how to walk on water!

Therefore, we were refreshed and recharged for the calving season. Although we lost two calves, they were just one of those things. Cryptosporidium went through the calves once again but we didn’t lose any this year which was a huge relief (blog post coming up soon on what we’ve learnt) not to mention quite satisfying as some needed lots of extra care.  I remember going out one night at 11pm to three calves. They were so sick we had the three of them under a heatlamp and they hadn’t moved. I couldn’t face stomach tubing the poor things so got a litre of fluids into each of them with a large syringe 60ml at a time. When I did the same at 1am, I was wondering if they would be alive the next time but when I went out again at 3:30, one was standing up and two were looking so much brighter. It was so satisfying seeing them recover and thrive.

Once things started to quieten down in May, I realised that I had only written 30,000 words. Soon after, I knew the Farming Independent were going to be launching my third book at the Ploughing Championships so not only did the book have to be finished, but it had to be good. Just as well I work better under pressure. I always seem to let it go close to the wire (but have a plan to prevent this last-minute stress in 2017!) but so far, it has always worked out. It did cross my mind though – what on earth would I do if my illustrator broke his arm in early August?! Thankfully, it all went to plan and the book was launched in September at Ireland’s largest agricultural show. 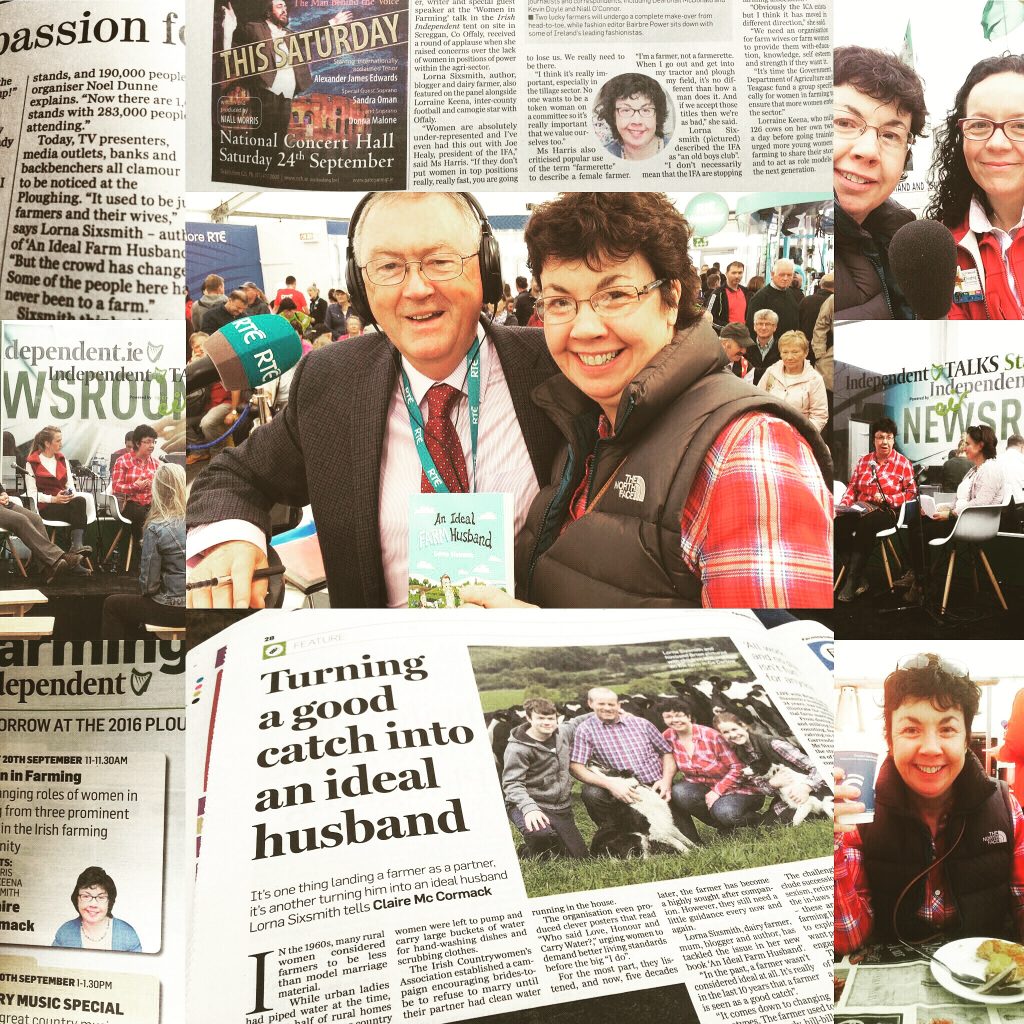 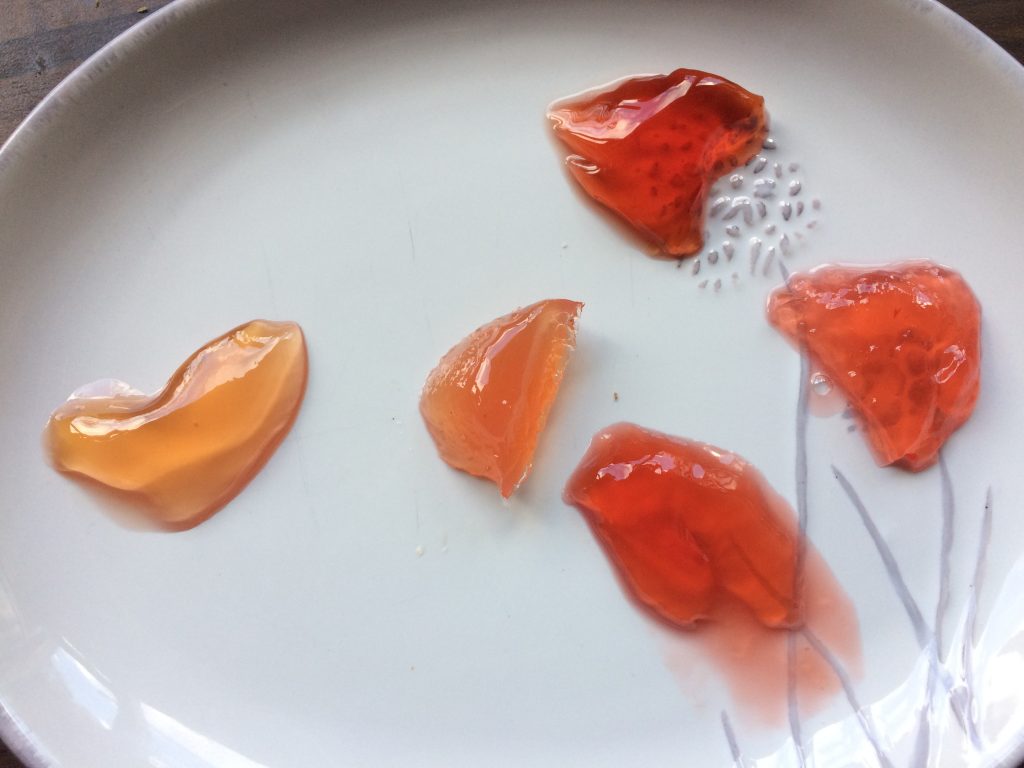 The different colours and setting abilities of my five batches of crab apple jelly.

I had considered putting some simple meal suggestions and recipes in An Ideal Farm Husband but partly because my word count ended up at 66,000 words in the end anyway, 10,000 more than Perfect Farm Wife, and partly because double-checking all my recipes in 2015 meant that I’d reached my culinary limits!I did make about forty jars of crab apple jelly this autumn though from five batches. I did consider sharing my learnings

I attempted domestic goddess status this autumn by making about forty jars of crab apple jelly. I did consider sharing my learnings but to be honest, I’m still a bit confused regarding why the five batches all turned out so differently. My single batch in 2015 was perfect making me think that all these tales about crab apple jelly being hard to make were from drama queens. However, apples were scarce in 2015 so there was no chance of being proved wrong. A plentiful supply in 2016 led to some puzzlement.

My first batch was a tad runny even after about two hours of boiling and was a bit sweet, probably because I forgot to include the lemon juice. My second batch set ridiculously quickly, after about ten minutes of boiling but ended up looking rather cloudy (and no, I hadn’t squeezed the bag when extracting the juice). Third batch was perfect. Fourth batch was good. Fifth and final batch took ages to set and I gave up in the end but it set reasonably well in the jars. So why the differences? I could only conclude that as the crab apples came from different trees, they had different levels of pectin. The first and final batches had a lot of windfalls in them and I wonder if they had less pectin, and hence less setting ability. So, no recipe, no tried and tested fail-safe tips to share with you!

I had a go at rosehip jelly too. Last year, I spent a relatively pleasant 90 minutes cutting open and de-seeding rosehips in the aim of attaining the 500 grams needed for the rosehip jam recipe (apparently rosehip seeds were once used as itching powder so not a good idea to include them in jam). After 90 minutes, I had 110 grams and decided life was too short. This year I picked lots of rosehips quite late as I followed the recommendations to wait until after the first frosts. However, most recipes included crab apples and I’d used all of them at this stage. I used “jam sugar” for its extra pectin for the rosehips, it took ages to set and is still a bit on the runny side but is delicious with cheese and will be good with turkey over Christmas too I’d say.

2016 had its sad moments too. It has been quite the year for many talented people passing away. I was saddened to hear that Jonathan Bell, co-author of so many wonderful farming books, joined them. 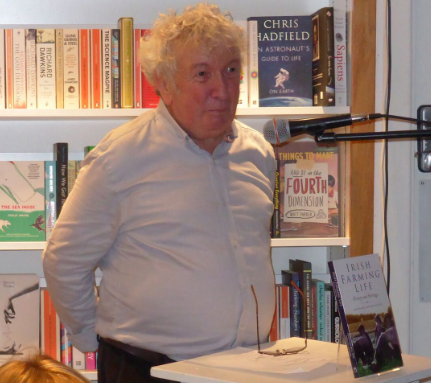 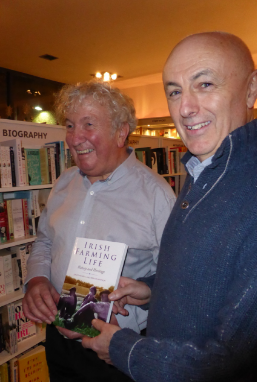 I first met Jonathan when I attended the launch of the book he co-wrote with Mervyn Watson, Irish Farming Life, and I was struck by the quiet nature and intelligence of the two men, both so delighted to see friends and fans in attendance, so gracious in their speeches. Farmers owe both men a great debt for researching our history and writing about it so eloquently and in such an accessible way in their various books.

Jonathan did me the great honour of reviewing my second book and it was included in Farming Life NI. The fact that he thought so highly of my little book, especially when I consider the merits of his research over many decades, meant so much to me. I feel privileged to have met him and communicated with him on occasion.

Some families will be missing a loved one at the Christmas table this year and I thank whatever is out there that we are all happy and healthy at the end of another year. It would be nice if the bank balance was a bit healthier and the beef price was better (€3.80 per kg for beef heifers at the moment!) but milk price is on the way up so here’s hoping it continues. We have a roof over our heads, food on the table, firing for the open fire and stove, lots of books to read, and the good health and strength to be able to do a hard day’s work. 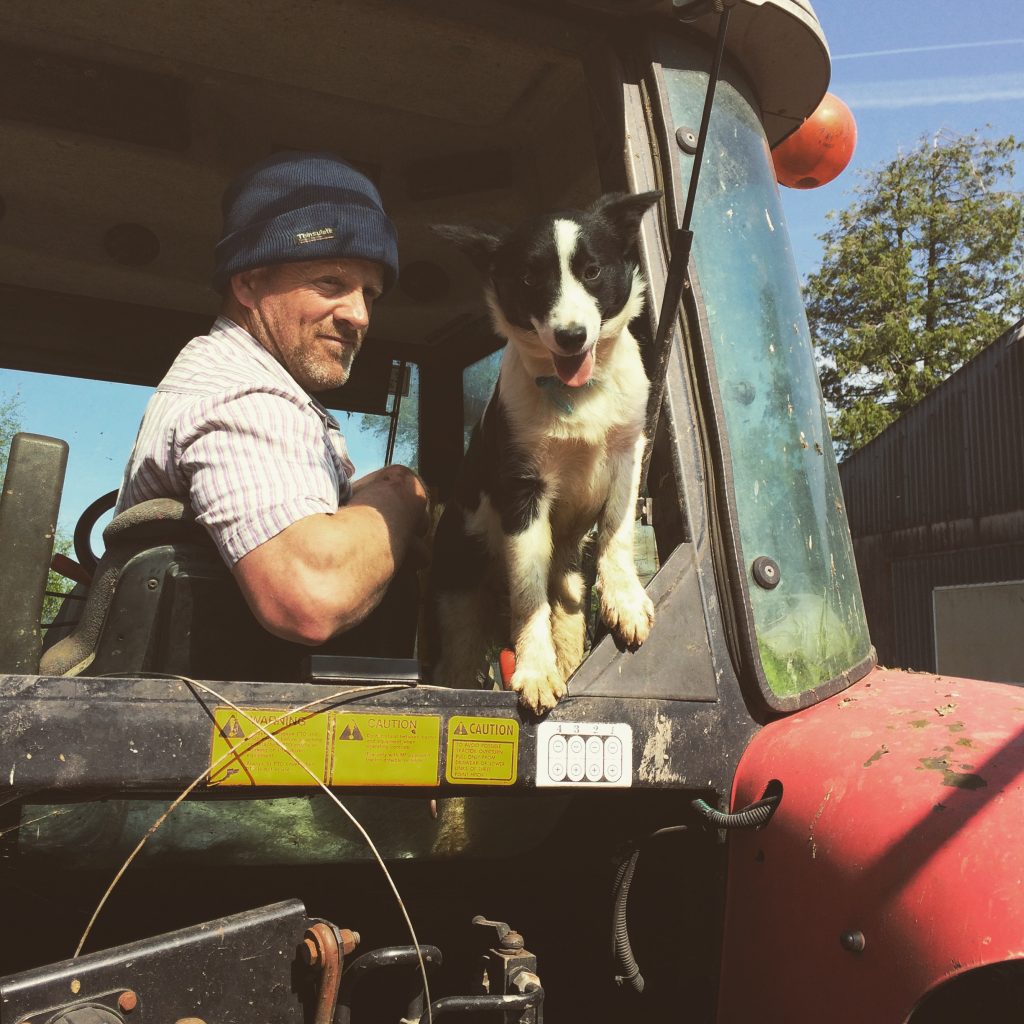 2016 is also the year that Lou came into our lives. Sam is definitely slowing up (he’s 9 now) and while he works very effectively if he’s interested in a challenging job such as rounding up and loading cattle, things like bringing in the cows just bore him now. In ways, we only realised how much he has slowed up when we compare him to her with her high energy levels. They do have fun at times though, when he gives in to playing  with her and they tear around the fields, mock fighting each other. She’s

She’s exuberent, happy, good-natured and just yesterday, got into the scullery when we were having dinner and we never heard a thing from the kitchen. I had left some grocery shopping there with plans to unpack it after dinner. For some reason, she ignored the bag with the box of pringles and the bars of chocolate and the tin of custard powder but ate through the packaging and half of a loo roll to the cardboard insert! As well as covering the floor with lots of muddy footprints. She’s a much smaller collie than Sam, which is just as well, as she fits neatly at Brian’s feet when he’s driving the loader, and as she launches herself at us like a tornado when let out in the mornings, she would knock me over if she was any bigger! She comes around with me when I’m doing my yard jobs in the morning and evening and it’s amazing what good company she is. It’s not that I feel lonely or isolated without her but just having her there would put anyone in a good mood. Dogs have a great habit of agreeing with nearly everything you say. 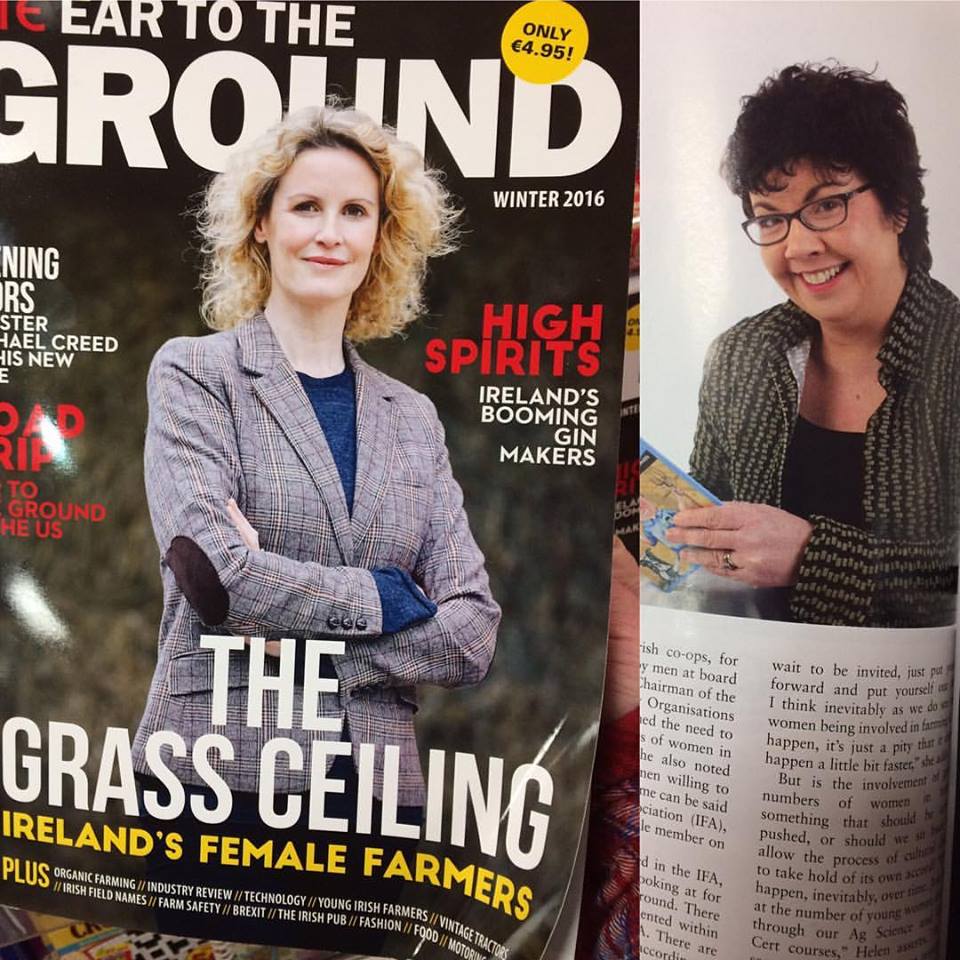 I’ve got some nice press coverage in the last couple of weeks and hoping it continues into 2017. I was interviewed on Liffey Sound’s Bookline last weekend. I was delighted to be included in the Writer’s Block series of The Gloss, reviewed in the Irish Examiner and featured in Ireland’s Own book pages as well as Woman’s Way. I was flicking through the new winter edition of Ear to the Ground the other day and got a lovely surprise to see my photo in there along with a nice mention within an article on Ireland’s female farmers. I’ve been writing a couple of articles for Think Business too.

I’m going to be on RTE Radio 1 between 8-9am on Christmas morning, talking about what farmers do on Christmas Day. Maybe it’s because it’s Christmas but being asked to do that makes me feel very honoured to be representing farmers.

2017 shouldn’t be a stressful year! I’m planning on doing less social media training and will be concentrating on farming and writing. I’m hoping to publish two books next year so I’ll keep you posted on how that goes. One is research / historical, the other will be a humourous novel. That’s the plan – we’ll see how it goes! I know I have some press coverage coming up in the UK early in 2017 so I’d like to increase the number of farm shops over there that stock my books and maybe I should be exploring getting some coverage in other countries too. It’s all time-consuming but so satisfying when results are achieved. It’s been on my “to do list” to try and get a column in a paper abroad too but I think I’m going to concentrate on doing occasional freelance articles and writing the books. Thinking of too many things means my head feels it might fly off my shouders!

One more thing: If you’re a female farmer, do put 17th January in your diary and come along to our meeting in Carlow. I’ll be sharing more details nearer the time.