I was delighted to be asked to review Irish Farming Life by Jonathan Bell and Mervyn Watson. The book is the result of 30 years of curation and work in the Ulster Folk and Transport Museum. It deals with the history and heritage of farming:

“By history, we mean the past as described and interpreted by scholars. We use the term heritage, on the other hand, to describe how the past is presented in art, folklore, drama, music, poetry, literature, films, re-enactments and museum displays. History and heritage often overlap, but can be opposing ways of looking at the past.” 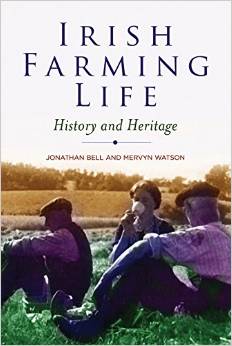 Having completed some research last year for my own book and investigating ‘the 1950s farmer as a good catch’, the role of the mother / mother-in-law in dissuading farmer sons to marry, the importance of the dowry and the language used in various personal advertisements, I was intrigued to read about Bell & Watson’s take on the farmer, the farmer’s wife, the Irish Mammy, the role of marriage in farming and much more. Bell and Watson spend some time explaining the various models for reading history, the value in using oral testimonies (not least because they give access to stories and happenings that might not have otherwise been recorded) as well as literature and letters. They explain how memories can be distorted so any interpretation has to consider how the skewing of memories, bias, forgetfulness, future events and more can distort memories – all of those have to be taken into account.

I also quoted an extract from Kavanagh’s poem The Great Hunger about McGuire’s mother but I interpreted it rather differently.

His mother, tall, hard as a Protestant spire

She had a venomous drawl

Bell and Watson state that the reason the extract is so well remembered is because it was unusual, that the father was called ‘the Boss’ which emphasised that he ruled the roost and the mother was called ‘the Mammy’ which emphasised her nurturing role. I’m not so sure – I think the Irish Mammy could be even more fearsome than ‘the Boss’, that the Irish Mammy adored her son yet ruled them with an iron fist as a school teacher in Antrim found that if he threatened telling 15 year old boys that he would tell their mother, good behaviour ensued. I’m pretty sure there were a few of these mothers around, who didn’t really want to give up her position of head of the house to a daughter-in-law. It may be an exaggeration but there are still plenty of daughter-in-laws who have had their work cut out with his dominant mother. Of course, as Bell and Watson point out, it’s all depends on the interpretation and the point of view!

The first three chapters were my favourites but that’s because I’m so interested in those topics and want to do more research into the role of women in farming. What is interesting is how the importance and status of women’s role in the farm lessened with industrialisation and ironically, with the growth of the creamery co-op. Traditionally, it was women that milked the cows and made the butter. However, once milk and butter went to the creamery, the payment came out in a cheque – made out to the farm owner, the male farmer, meaning that women often didn’t have access to that money. With the onset of mechanisation, men deemed it acceptable to start milking cows, especially now that the milk was more profitable. Women’s role often turned to hens and eggs, and they resisted sending eggs to the creamery, knowing that yet again, the money would be in the inaccessible cheque. Almost every farm wife kept large numbers of chickens, and when you consider that 40 chickens equalled a cow in terms of income, you can see their importance to income.

The dowry was hugely important in the role of farming marriages, with the incoming dowry often being used to fund the dowry for a daughter. Although very few women ploughed at that time, the ‘Queen of the Plough’ prize at the Ploughing Championship was a dowry of £100 thus enabling the winner to use her dowry to get married! In 1957, two women were joint winners and as neither got married within the year, the prize was not claimed. Isn’t that unfair that they didn’t get a financial reward for winning this competition?

Children worked from a young age, planting and digging potatoes, pulling beet, drawing water from the well, ploughing, milking and feeding stock. I remember my dad telling me that they all got a week off school to dig the potatoes and at the end of the week, they each received ten shillings for their labour, feeling that they were as rich as kings.

The chapter on labourers and servants reveals just how many small farmers and cottiers travelled the country looking for seasonal work and moving to Scotland or England for the harvest, particularly the potato harvests. Many years ago, I read Patrick McGill novel Children of the Dead End which revealed the rough working and living conditions for these female and male workers, Bell and Watson include references to it too. In many instances, men travelled for work, leaving their wives and children behind to tend the small farms. In the early 1860s, it is estimated that 100,000 men emigrated for work. As late as 1971, there were still 600-800 workers travelling to Scotland every year for the harvests. Testimonies about the hiring fairs were hugely interesting, how those looking for work were treated by future employers, the desperation to be hired, how they viewed the living conditions and quality of the food as important as the wages. Some workers were treated like animals, others were treated like one of the family.

When my father’s family moved up to Garrendenny in 1945 from their farm near Fenagh (they inherited this farm from an uncle and went on to sell the other farm), the children were aged from 5-16 with the boys aged 7 and 10. Their workman was aged 18 and he came with them, living in the house. It was a sizeable house by the standards of many cottages but there were still 8 children, their parents, a grandfather, and a workman. Uncles and aunts often came to stay for weekends too. Pat worked with them for another decade and moved to another farm when the boys were doing all of the work.

The history of ploughing and the ploughing matches is fascinating too as they explain the role ploughing played in Irish life in terms of economics, national identity and leisure activities. Thousands attended the ploughing matches which were held all over the country, even the £1 note featured a ploughman as did the Farmers Journal logo. Farmers had to increase their acreage under wheat during the WW2 so the plough became even more important to the country’s economy. At one stage though, to purchase a plough, the farmer need a certificate endorsed by a reputable member of the community plus a clergyman which showed that owning a plough showed one to be a strong farmer of ‘sober and industrious character’. What was also interesting was how the relationships between farming, church and state was emphasised by the blessing of the plough before the ploughing matches, initially blessed by Protestant bishops but by Roman Catholic Bishops in 1939. This was actually the first year that I had noticed that this tradition continues (ecumenical now with both bishops present).

The last chapter deals with the various models for interpreting history and is also interesting as I’d never really considered how museums have had to change and react to performance targets and providing ‘value for money’ in how they presented history.

My favourite chapters were those on ‘the family’, ‘the neighbours’, and ‘farm labourers and servants’. For those with memories of the 1920s – 1960s (and still with stories from their grandparents in their minds), they will hugely enjoy this. I know my father will and it has also equipped me with lots of questions to ask him about his childhood, stories that I want to write down before it is too late. For readers who are also interested in discussions of historical methods and different interpretations, the opening and closing chapters provide eloquent and thorough discussion. Its strength is its examination of the various heritage via the arts – how they explore how film, literature, leisure events, re-enactments as well as oral stories contribute to our growing knowledge of the past. I particularly enjoyed the quotes from oral stories, it really brought Irish farm history to life. My only complaint – that it wasn’t long enough!

Irish Farming Life is being launched in the Gutter Bookshop, Cow’s Lane (isn’t the name apt!) on December 3rd. I’m looking forward to going along. It is published by Four Courts Press and I’d like to thank them for the review copy. It can be purchased on Kenny’s Bookshop for €20.65 and Kenny’s ship worldwide for free!