What constitutes a good farmer’s wife? ?I was amused to see this quote in ‘My Farming Week’ in the Farmers Journal a few weeks ago. 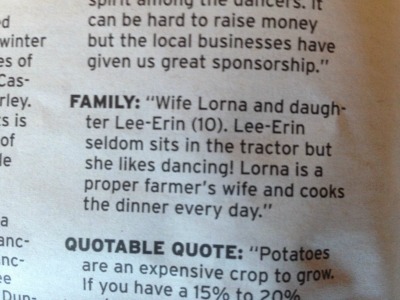 I may share a name with this proper farmer’s wife but I think that might be where I draw the line at calling myself a good farm wife. Yes, I cook a dinner nearly every day but there’s often a limit to the amount of love that is put into making it.

I attended a Teagasc conference at Airfield Dundrum last week, named ‘Family Farming: Continuity and Change’, many historians, geographers and agriculturalists exploring family farms from the past and present and it really was fascinating stuff. More on the presentations over the next couple of blog posts but for today, I’m going to tell you some interesting stuff about farming wives. 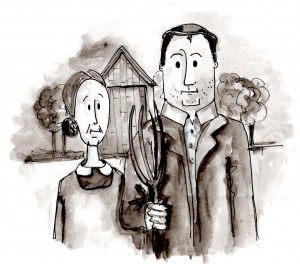 Prof Willie Smyth (UCC) gave a fascinating talk on farm and marital transactions in Clogheen-Burncourt 1830-1974. While we might think that the necessity of a dowry up until the 1960s for most farmers wives put them in a submissive situation, as they needed a dowry to marry, in fact, the dowry gave her status within the family she had married into. Indeed, if it did happen that they got married without a dowry, she was looked down upon and it was whispered about! ?Obviously the dowry and class system meant that not every marriage was a happy one. A farmer’s daughter was expected to marry a farmer with a farm of a comparable or bigger size to her father’s. ?If she fell in love with a ‘small’ farmer, she wouldn’t get permission to marry him. She may not like or might even refuse to marry the man her father chose so some remained single. It’s worth noting by the way, when a man married a woman with a farm, he had to bring a dowry. Many farm families (brothers, cousins etc) held onto the same land and expanded by marriage. The kinship meant that a woman was often afforded protection by her extended male family – should her husband turn out to be not just a good bloke, he just might get beaten up outside the pub some night.

In the first part of my book where I compared the farmers of the 1950s to now (re their being considered a good catch or not) and it was clear that many farmers just could not afford to marry. Smyth explained that some more as examination of farmers wills in the late nineteenth and early twentieth centuries reveal that strict requirements were laid upon the inheriting son. Not only did he have to place his siblings in positions of equal or greater status to himself, providing sisters with dowries, brothers with education or a trade, he couldn’t subdivide the farm, had to keep it in its entirity and he also had to bring in a dowry of a specific amount (e.g. ?200). ?The wealthier farmers would have looked for opportunities for their brothers to buy farms and for sisters to marry other farmers but for many, their father had dealt them an impossible hand and they stayed single – often becoming incredibly lonely. 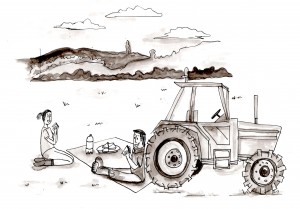 While their mothers (the infamous mother-in-law) were sometimes left marginalised, still relatively young, but wishing to hold onto their power rather than being subject to a daughter-in-law, hence many wouldn’t have welcomed the prospect of their son marrying. Nowadays, farmers tend to build a second home for their family so the widow is less powerful, family sizes are smaller and couples often live together before marriage. Rather than receive a dowry, daughters may inherit a site from the farm, giving them a good start on the property ladder.

There was an article in the Farmers Journal some time ago when a writer commented that many farmers were expanding their dairy herds without examining their costs and their profit margins, stating that many would be better off marrying a nurse or a teacher than expanding their 50 cow herd by 30 cows. I remember it being said in the 1970s, a nurse or a teacher was worth the same as 20 cows that the farmer didn’t have to milk! ?And so it seems things haven’t changed. A teacher could be described as a ‘laying hen’, bringing in an income but with the good holidays to help out on the farm and cook for the silage men! I’m definitely not a good farmer’s wife – I stopped teaching when Kate was born! ?Smith found that in the 1960s, there were 25 nurses in that Tipperary parish and it was easier for a nurse to marry a farmer than a farmer’s daughter. Women recognised the value of education and encouraged their daughters to get a good qualification. ? Interestingly, out of 25 Queen at the Macra Blue Jean Country Queen contest two weeks ago, nine of them were teachers or student teachers! Maybe things haven’t changed so much after all.

Prof Sally Shortall (QUB) examined how roles in farm households have changed so much, comparing the 1980s to now. Huge changes in less than three decades. In 1987, women talked more about housework, it was much more central to their role, they didn’t expect the men to help in the house. ?Agricultural advisors may have done business with the male farmer but chatted with the farmers wives, getting the news, having tea and homemade cake. They rarely see a wife now apparently and very rarely get tea and cake! I do think part of that is because they are expected to get around more farms but I’m glad to hear I’m not the only farmer’s wife who doesn’t offer tea and cake when they call into the house for a cheque – I just don’t have time for anything longer than a 4 minute chat while I am looking for the cheque book and writing it out.

While men were in the public sphere in the 1980s and for decades and centuries before that (women rarely being seen at the mart), it is now the wives that are usually in the public sphere as they are out working and the male farmer stays on the farm for most of the time. Women are often worried about their husbands being isolated now, compared to the 80s when farmers visited other farmers or went to the creamery on a daily basis. Women’s work on the farm was hidden then even though many women kept the farms going, now women are doing less outdoor farm work as they are developing diversifying businesses, doing paperwork or working off-farm. Some farmers are now farming part-time and looking after the children after school as their wives are working full-time off-farm.

What was also interesting is that farm wives are often more innovative than their husbands, it’s often the women who start a farm business to diversify, whether it is providing accommodation to tourists or creating a new food product and selling it at farmers markets. Mairead Lavery (editor of Irish Country Living) commented that they are often inundated and so impressed by the applications in the farm innovation competition but very few women enter the Farm Technical competition, seeing it as ‘male’ territory. Interesting isn’t it?

Unfortunately, it also happens that for some women working off-farm, their income is supplementing the farm which seems crazy. Her pension may be secured against a farm loan. She doesn’t have the same standard of living as her peers. In my opinion, it is one thing to work outside the home because your brain needs the challenge and the enjoyment of it, it’s another to have to go out to work when you have young kids and you really don’t want to but if the farm can’t pay for its own loans most years and provide an income, it really has serious implications for the future of family farming. More on family farming coming up soon 🙂

The talks were fascinating and Teagasc are planning to publish these findings in a book next year. I will tell you more in another post in a few days.

Have I told you yet about my next book? ?I started one in April and wrote almost 40,000 words but am parking that one for now as I was feeding the calves one morning and the topic for the next book, the ‘sequel’ to Would You Marry A Farmer? came to me! The working title is How To Be A Perfect Farm Wife – The Cheater’s Guide! ?I’m not even going to pretend that I am anywhere near being a perfect farm wife but hopefully as I research and write, I will learn how to cheat more effectively so I appear to be perfect! ?I’m hoping to finish writing it by Christmas and then spend a few months editing, formatting, illustrating it etc and I will launch it at some agricultural show next summer. That’s the plan!

On another note, I have just purchased a breadmaker so there will be no excuses now for me not having bread in the house on those days I feel like being a hermit and not going to the local shop! Last night, the farmer had fresh bread (made in breadmaker) and fresh scones (made by daughter) for supper – how’s that for being a #perfectfarmwife then?? I have to admit though that every now and then, I wonder aloud if I should get a ‘proper job’ especially if I see a nice job that I could do. Then just as I am thinking that there is no way I could work outside the home for 48 weeks a year, 5 days a week and not be here to hear the kids’ news when they come in from school, Brian said that he couldn’t do it without me. Though my calf feeding could be replaced by someone else, it is nice to sit and have breakfast together at 10:30 even though it is often rushed, it is nice to know what is going on on the farm and make decisions together.

4 thoughts on “What’s A Proper Farmer’s Wife? Past & Present”