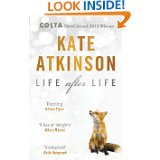 I started reading Life after Life early yesterday evening and finished it this morning – this is a huge clue as to how much I enjoyed this book – I couldn’t put it down! Easy to read and very thought-provoking with characters that really seemed alive.

If you are familiar with the film ‘Sliding Doors’ or even if you use the expression ‘there but for the grace of God go I’, you’ll be entranced with this whole idea of how chance encounters and happenings can change our lives one way or the other. ?Born in 1910, just before Britain changed for ever with the Great War, Ursula is born many times during the novel and the story changes slightly each time. Born with the umbilical cord wrapped around her neck, the versions change from her dying, to the doctor arriving just in time and cutting it, to her mother Sylvia grabbing a scissors and cutting it, to her father pacing up and down outside (he was absent in all other versions). How close death is to life and how a death might change the course of history. What if Hitler had died as a baby? What if he had been killed by Ursula in 1930? Would someone else have had the same reaction and would the path of events have been similar? Who knows but it certainly will make you reflect on your own life.

At times, I found I was really getting into the course of events to find the chapter ended and there was another version of events to get accustomed to but it was very intriguing. The jumping from past to present and back again might be a little confusing. At times, the events weren’t at all ideal and I was relieved to find that there was another version. The character of Ursula could sometimes predict that something was going to happen and her actions would change the course of history, saving lives sometimes. The book focused on the second world war for much of it, Ursula experiencing it in many different ways. In one version, she had married a German and spent time with Hilter and Eva just before war was declared – I have to admit the section with Eva went on a bit and perhaps their length weakened the novel slightly.

In all of the versions, the changes Middle England was experiencing was very evident. Upper middle class rather than aristocratic, Ursula’s family were still able to afford a cook and maids as well as a gardener but the WW2 became a social leveller for the younger generation.

I really enjoyed this book – makes me wonder how different I might be if some things had happened differently and yet in another way, I don’t think I’d be all that different. But what if I had had kids in my 20s or if I hadn’t gone back to college – mind you, these things were inside my own control to an extent. Many of the different versions in the book were due to something that were outside Ursula’s control but there were some events that she had a deliberate hand in altering (because of her ability to sense danger). Ursula’s own personality changed in each version too which was interesting.

It made me think again about how even the children we have could be so different if they were conceived another month or even if another sperm had been a faster swimmer! Given our ancestors, I am continually amazed at how lucky Brian and I are to have two such kind, intelligent, fabulous, caring, handsome children – there was plenty of opportunity there for our genes to provide us with two ugly, stubborn, proud, obnoxious children! ?We brought them out on Friday night to celebrate their good reports, they really were brilliant – both from academic and social points of view. Had a lovely meal with them and they each had 2 pints of club shandy each (fizzy lemonade and orange mixed) which was a huge highlight! Very proud of both of them.

I enjoyed this and would recommend it as a great holiday read. Having had a quick look at other reviews on Amazon, most seemed to love it or hate it. I thought it was a clever plot, well written with good dialogue. ?It certainly made me think about fate!