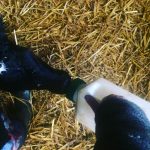 It’s been a busy fortnight with the calving and I’m presuming that those lambing will experience similar circumstances when it’s full flow! Let me know if these situations are familiar to you or if I’m totally weird!

Maybe it’s our age, maybe it’s the fact that the weather has been cold and blustery, maybe it’s because we are sleep deprived but unless we get tea at regular intervals, our energy levels and productivity take a nosedive! We know things are bad when we’re sitting drinking a cuppa and watching the calving monitor hoping that the cow won’t make any progress or that the newborn won’t suck the mother until the cup of tea is finished.

(If you’re wondering why we don’t want the newborn to suck its mother, its because we then don’t know how much it has consumed. Calves don’t have any immunity so it’s really important that they consume approx 3 litres within two hours of being born.) 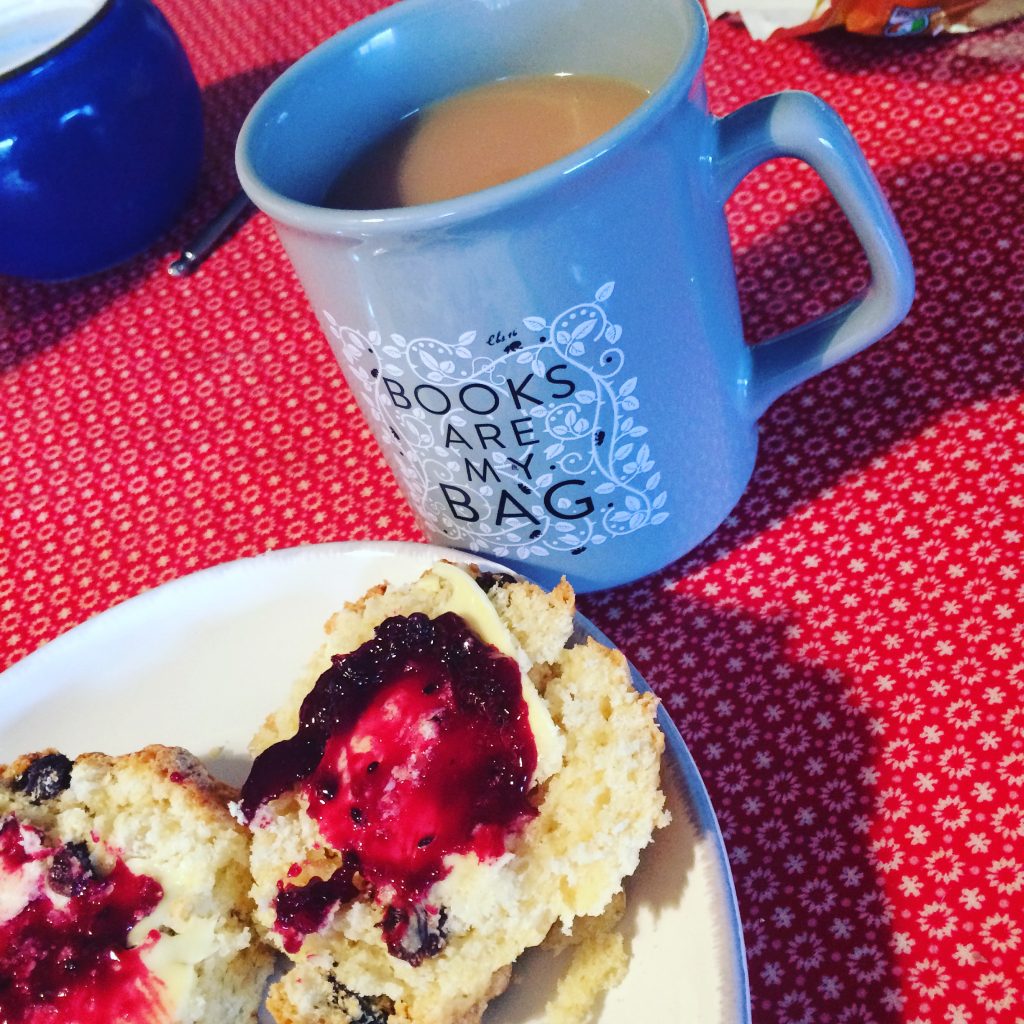 Chocolate and cake goes down well too – and yes, I have to admit that two dozen queen cakes does not last four people much longer than 24 hours! Okay, I know a fruit or veg smoothie or something healthy would probably do the job just as well but when it’s cold out, I just crave cake and a huge mug of tea.

I’m referring to myself here of course (but when I shared this in a farm wife group, I discovered I’m not the only one who does this). I tend to wear leggings, tops, a comfy short dress and if it’s really cold, a cardigan and a jacket, when feeding the calves. If I’m planning to have a shower after feeding the calves in the morning, I sometimes won’t bother to put on a bra first thing. I’m wearing so many layers that any unexpected visitors are unlikely to notice and it’s only for a couple of hours anyway.

The only problem is things happen like the newborns keep coming and they need feeding. Last week, we had 9 one day, 8 the next, and 6 the next. The shower sometimes doesn’t happen until 11pm and I remember my braless condition when I get undressed. It’s also happened that I only remember as I’m doing up my other coat to pop to the postoffice and find that a button won’t fasten as my boobs are further south than normal.

Yes, I’m breaking my own rules that a farm wife should always wear a good bra in case cattle break out and you have to run! 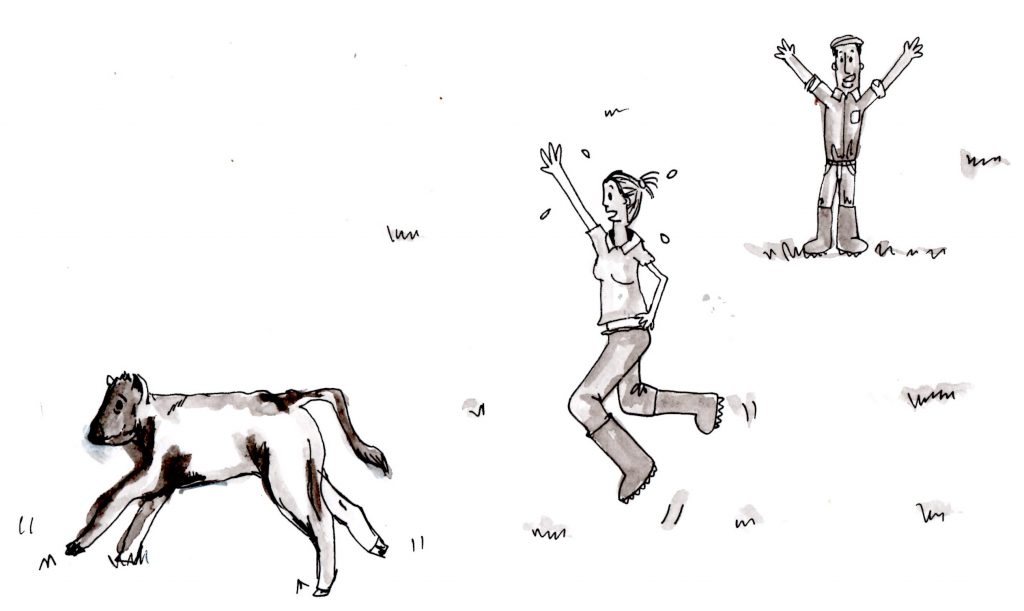 Just as well the weather is cold and I wear many layers!

I wear fleece jackets usually – they are easy to wash and dry quickly. And yes, I do wash them frequently but I still get complaints that I smell of sour milk quite a lot. Some of that has to do with collecting the kids while wearing said coat and if I’m sitting in the car with the heater blowing, then yes, I guess the smell does intensify!

I won’t make the same mistake that I made last year. I was collecting son from a rugby match and as I was running late, I just pulled off my wellies and waterproof trousers, pulled on shoes and headed off. Half way there, I realised my coat was a bit pungent but consoled myself that as I was running late, most other parents should have left by the time I got there. But the bus was late, so lots of other parents were milling around and one came over to talk to me. As I reluctantly wound down the window, the scent of fabric conditioner wafted into the car. I can only imagine the force with which the fumes of sour milk hit her in the face.

Remember the ad “Happiness is a cigar called Hamlet”. For me, Happiness is when a newborn drinks a bottle of milk first time and touch wood, that’s exactly what’s been happening this year.  They are eager to drink after about 30 minutes and glugging down 3 litres no problem. Very few have only drank 2.5 litres and we’ve even had a few that drank 4.5 litres! I was wondering would they drink again within the 24 hours but yes, drank 2.5 litres at the next feed. 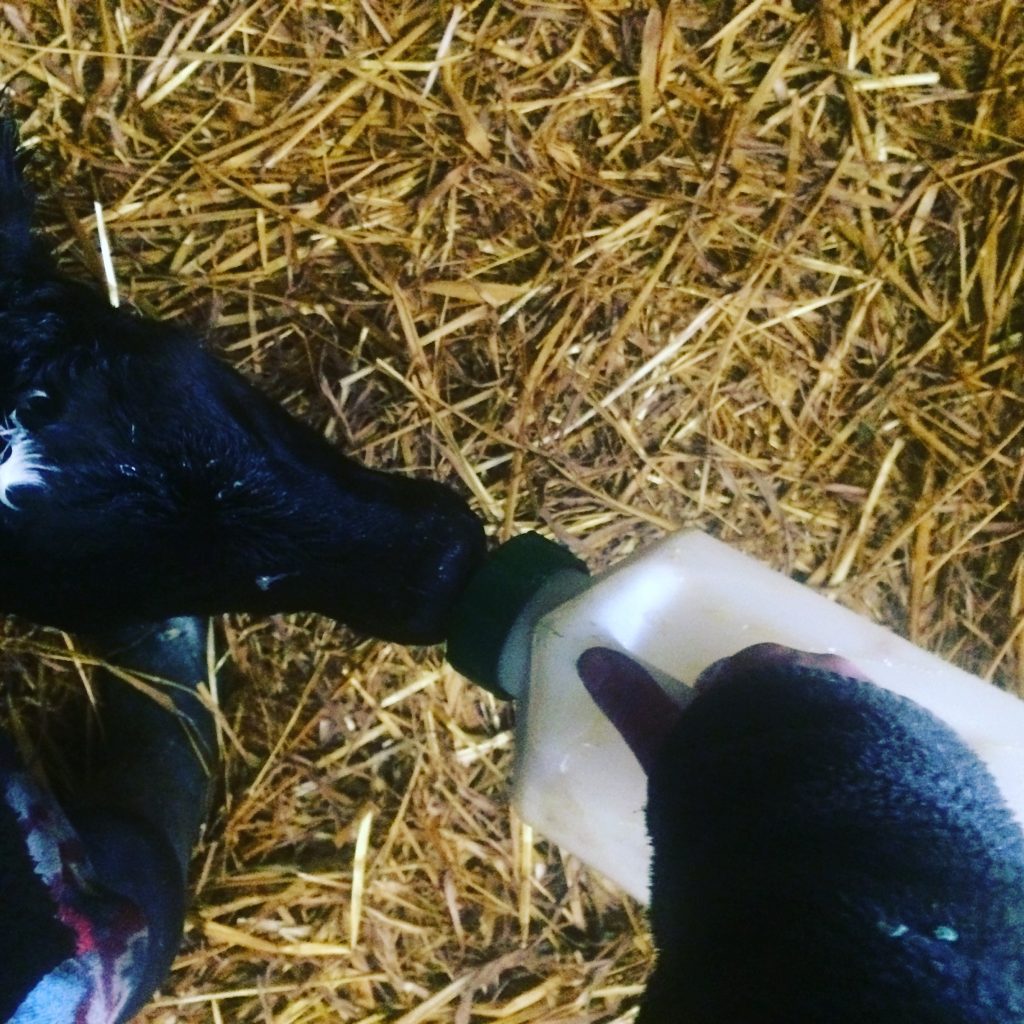 Lots of farmers stomach tube dairy calves with the first feed now. It’s quicker I guess but you still have to train them to feed to a feeder/bottle. I find that about half the calves will take part of their second feed from a feeder and almost all will be on the feeder for their third feed.

I’m putting this down to sleep deprivation. I made a pot of tea today and poured it down the sink before I realised what I’d done. I thought I’d just scalded the teapot and never noticed the weight that should have signified it was full when I picked it up! I’m sure I’ve made lots of other silly mistakes too but I simply can’t remember any of them. Although most of the cows calve fine on their own, we still like to keep an eye on them. Things can go wrong. For example, the other night Brian checked a cow at 4am and discovered that while there was one foot and one nose, the calf needed a little re-arranging for both feet to come out. She then calved within ten minutes.

What things typically happen on your farm during the calving, lambing or kidding?