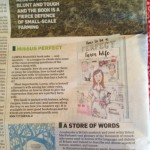 I have to admit that I did wonder if any farming husbands were hit over the head on Christmas morning when their darling beloved discovered a copy of How To Be A Perfect Farm Wife under the Christmas tree. If she didn’t know about the existance of the book beforehand and didn’t take the time to see the humour in the front cover illustration, it’s a possibility this might have happened. Indeed, I received a tweet from one young farmer (in his mid 20s) from the UK who said that his partner’s aunt suggested she hit him over the head with it. He then requested that I emphasise the ‘do not nag’ point should I write any further volumes! I was hugely amused but hoped he was in the minority!

I was delighted to hear from some people that the recipients were thoroughly enjoying the read. Here’s a couple of them:

Mrs E delighted with her Xmas present thanks @IrishFarmerette She’s been laughing her way through it already! pic.twitter.com/fDqRZrE5S4

@willpenrievans@IrishFarmerette had us in stitches too, could have been written by us, ???? — Hailey (@DairyWifeHailey) December 28, 2015

And I was delighted with this comment that there were so many aspects of the book that this reader could relate to, and a nice suggestion that her partner was finding the same. This was the reaction I’d received from my first book and I was hoping it would be the case with the second too. Chuffed! 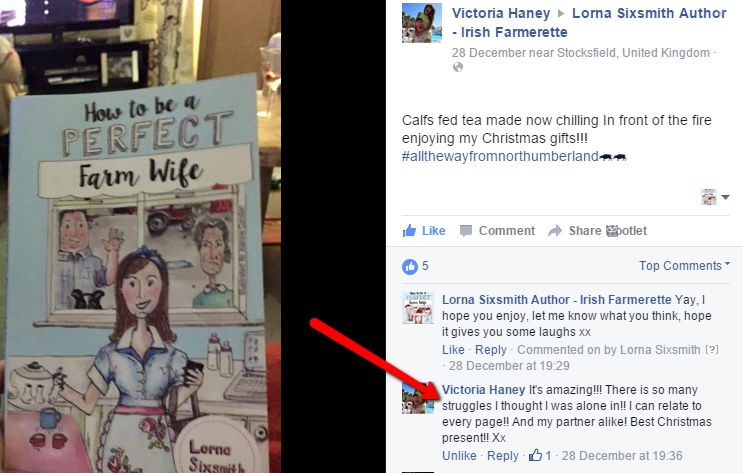 Now for the sales figures!

I was aiming to sell / distribute between 1200-1500 copies of Perfect Farm Wife by Christmas, hoping for 1500 out there so there would be a strong chance that over 1200 of them were sold. The wholesalers are making smaller orders this time round which means a tighter ship I guess so I’m hoping there aren’t too many left on bookshelves at this stage. I had hoped for some national press coverage before Christmas and although I was contacted by one TV programme, it didn’t materialise in the end. Getting press coverage in September meant it was too close for some (been there, done that – which is fair enough really). There will be a review in a national paper coming out soon, as can happen it was postponed due to other material having to be published before Christmas. I did get a nice mention in the Farming Independent again, I was interviewed on Cornish radio on 20th December and on Joe Duffy’s Liveline programme on self publishing too. Social media helps too of course. 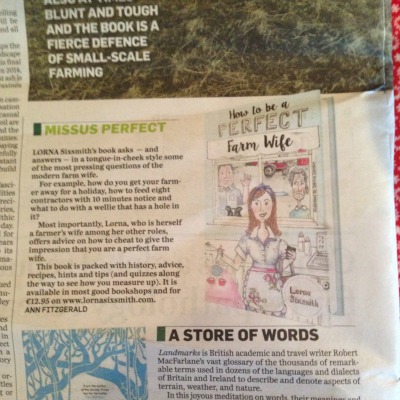 There were just over 1200 paperbacks sold / distributed and I’m hoping that close to 1100 are sold. Two gift shops sold 80 books which I was really happy with and proved that it was selling well in gift shops as well as bookshops. I probably should have made more of an effort to contact more giftshops and farm shops but it all takes time! What I saw as a bonus was the 115 books sold in December from Create Space (the print on demand section of Amazon), most of which were to UK purchasers. I hadn’t included those sales in my budgeting at all so they are a nice bonus.

Many people say that the publication of a second book increases sales of a first book and I found that to be the case. Of course, readers of the first book came back to purchase the second but also many of the purchases from the website were for both books. Wholesalers ordered it too so it was in demand in the shops. About 350 copies of Would You Marry A Farmer? sold between Sept – Dec with some selling on Create Space too which I thought was pretty good for a self-published book.

So what’s next? Well, I have plans for another four farming related books.  I met my editor, Sally Vince, before Christmas and it makes such a difference to be able to hash it all out. Brian is great but considering he thinks that I’m writing about ‘nothing’, ie the stuff that everyone knows, he doesn’t quite see the potential! The working title for the next one is How To Be A Perfect Farm Husband of course and will be the last in this series. I never thought of it being a series to be honest, but it has worked out that way. The plan is to have it out for September. The structure has been planned and I’ll start writing it in a couple of weeks, giving myself 3-4 months to research and complete the first draft.

I’ve plans for some shorter (3 or 4) books after that – they will be a series in their own right so I’ll need to put more research and thought into them.  I’ll probably do some rough planning and writing for them in 2016 and then launch two in 2017 and two in 2018.

Happy New Year to you all. If you got Perfect Farm Wife in your stocking I hope you enjoyed it. We had a lovely Christmas although Brian was keen to get ‘back to normal’ on St Stephen’s Day! The kids and I have enjoyed the hibernation – fire lighting, Christmas tree lights on, books, scrabble, jigsaws, films …… and of course, lots of eating.

6 thoughts on “How ‘Perfect Farm Wife’ Was Received”