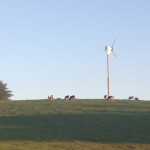 What seems to be infuriating most farmers is that the report only went back to 2009 and there doesn’t seem to be any signs to reveal any key information before that date. Berkery (former General Secretary) and others are warning the IFA that they can’t reveal their salaries for legal reasons. This means that farmers are imagining the worst. With reports that €5m was spent on two top posts in seven years, the mind boggles really. The thing is though that what we might consider to be our wildest imaginings aren’t coming close to the reality. For example, it was a huge shock to most farmers to hear that the IFA President was receiving a salary of €147K a year plus about €55K in directors fees. This shock was because the IFA have always dodged questions re salaries, preferring that people believe that the President did it for the greater good and probably for future career advancement. According to the Con Lucey report, salaries decreased from 2009-2010, for example, the deputy President’s salary decreased from €50K to €30K.

Add to this, the fact that the President received a golden handshake when he left. Not a gold watch, not a nice tip of €5K but the equivalent to a year’s salary. Yes, Padraig Walshe got a gold handshake of €181K when he left. This makes a total joke of the argument by the IFA leadership that the salary was to compensate the President for hiring in farm workers while he was absent from his farm. I don’t think any farmers ever imagined a golden handshake this size so goodness knows what happened pre-2009 when Ireland was in the throes of the Celtic Tiger.

Personally, I don’t object to the President getting a salary of €60-€80K on top of the expenses of farm workers and mileage etc. I do object to the receipt of significant directors’ fees on top of a large salary. It has become apparent too that many IFA staff have received fees of €5K-30K from various IFA businesses including IFA Telecom. To the best of my knowledge, it appears that Jer Bergin (current treasurer and acting President) was the only one to turn down the director’s fee payment. Lucey recommends that these fees go into IFA funds in the future.

Motions of no confidence in the executive board were put forward at the last meeting and following a secret ballot, were defeated. The votes for and against have not been made public. It seems that various voters were persuaded by the arguments in the meeting but returned home to county meetings to find that grass roots members didn’t agree with them. Farmers aren’t happy and a number (I believe it is currently nine) counties have put forward motions of no confidence again and two (Limerick and North Galway) are going to protest in Dublin on 5th January.

Perhaps as a result of this announcement, the four regional chairman (four members of the executive board) have offered to stand aside on the condition that there is a change in the rules so they can seek to be reappointed to their posts. 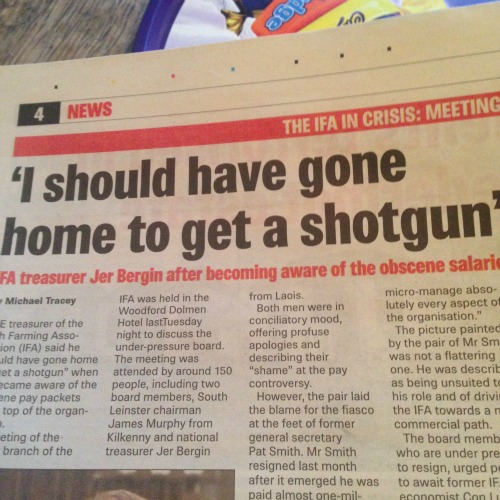 The IFA have had three presidents within a month. Eddie Downey resigned. Tim O’Leary, the deputy acted as President for a couple of weeks until realising it was going to be difficult to hold that role and campaign in the elections. Jer Bergin is now the acting President. We will find out this week when the election will be held.

There doesn’t seem to be any intention of having an interregnum board to sort out this mess and delay the election until the autumn. Maybe this is deliberate, after all, if farmers are talking about the campaign, we may not be asking for further reveal of past events. Perhaps that is what the IFA leadership is hoping – it is certainly looking that way. England had an interregnum government after Charles I was beheaded, surely the IFA could manage it for nine months.

Seven candidates are seeking the position of President at the moment. Each needs six nominations which means there will be a maximum of four hopefuls. I’m not sure what happens if, for example, all seven candidates get 3, 4 or 5 nominations but presume the least popular will be discounted and those counties asked to nominate again. We’ll find out on Wednesday.

I only know three of the seven candidates so will only comment on them. I’d imagine they will be three of the final four but time will tell. Derek Deane was deputy President 2005-2009. He tried for President in 2009 but was defeated by John Bryan. Brian was secretary of our local branch then and was involved in some of the canvassing for Deane. Deane is now known as the ‘whistleblower’. It seems some hold him responsible for making this mess public (seems daft to want to shoot the messenger but heyho) but I guess the question must be asked – why was he the ‘chosen one’? Who sent him the information and why did they choose him? Was he the only one with the courage to go public when motions within the IFA had been defeated? Was he the only one with the morals? Or was he hoping this would give him one last try at President? I think we all know that it needed to go public for changes to happen. Nothing was going to change without public reaction. I’m not convinced he will get the trust of enough members to win the election but it’ll be interesting to watch.

I went to school with Henry Burns but haven’t seen him since. He is the Livestock Chairman and  seems to be passionate about getting the best deal for all farmers. He isn’t as articulate as others but he looks like a farmer and most media pictures of him show him in a waxed jacket rather than a suit, this might sound daft but could mean he is seen as more trustworthy, as ‘one of them’. Laois members are well practised at running campaigns but I’m sure they are sick of death of canvassing – can they pull out the stops once more?

I met Tim O’Leary when we were both on RTE’s Prime Time. At the time, I was disgusted that he had already stated that he was running for President, showing he was thinking of himself rather than trying to sort out the mess and explain matters to farmers, let alone show some humility and apologise for his part in it as deputy President. The fact that he is ensuring his deputy position will still be his if he fails in his Presidential campaign shows more of the same attitude. I honestly don’t know how he, and his supporters, are going to head out on the campaign trail and canvas, particularly in all those counties where they have called for his resignation. Would he make a good President? Well, the fact that he was arguing that Deane didn’t need to go public, that the renumeration committee could have dealt with these issues in-house doesn’t bode well for transparency in the future in my opinion.

I’ve a feeling the debates within the Presidential campaign are going to need very large rooms – full houses I’d imagine as people turn out to see what the new hopefuls have to say.

In my previous posts on the IFA (20th November and 28th November), I agreed with the motions of no confidence in the Executive Board. I’ve revised my opinion somewhat since then. Lucey makes it clear in his report that Lucey and Downey had meetings before the board meetings and ruled the roost (page 8/9):

From what Jer Bergin has been recorded as saying as he visits various meetings all over the country, he didn’t take the €30K payment from IFA Telecom, he was horrified when he realised all that was going on and he didn’t sign off on Smith’s severance package. Neither did he sign off on a bonus and IFA Telecom fees for Smith in 2014 and 2015 until the renumeration committee was set up. For whatever reason, he didn’t go public with the revelations but argued that he was in a difficult position, particularly as he had campaigned for President in 2013 and it could have been interpreted as ‘sour grapes’. To give him his due, he has travelled around the country to meet farmers at meetings and no doubt, had to listen to lots of shouting and roaring. He isn’t going for President. Indeed, it seems that he is doing what he can while in his role as treasurer and acting President to sort the mess and ensure that normal important business matters aren’t neglected and then he is getting the hell out of there. And who can blame him? Cows may kick but that’s about the worst of what they can do to you.

Yes, of course there is a silver lining in all this. While many IFA members and leaders are disgusted that so much dirty laundry has been washed in public, members have been attending meetings in huge numbers. Probably feeling that whatever they said didn’t make any difference in the past (and yes, even Lucey argues that Downey and Smith didn’t listen to other Executive Board members let alone ordinary members), they now feel they can have a say in the future of the IFA. Farmers need a strong organisation – one that is genuinely working for them. You never know, the IFA may be even stronger after this but a lot of water needs to go under that bridge first. It’s going to be an interesting start to the year. What are your thoughts on it all?

Update 4/1/16 There will be an election for the deputy President in the spring too and then the four regional chairs will be elected. More information in this post by Agriland.

2 thoughts on “Interesting times for IFA next week”