Are farmers born or made? ?Just because a person is born into a farming family, does that make them a good flarmer? ?Are there city people who are capable of being good farmers?

Succession is a huge issue for many farmers. There’s a huge familial tie to the land in Ireland which means that people don’t tend to sell up and move to another farm that often – part of the reason could be due to the stamp duty but there’s also that familial tie to their own land. ?Some farmers would find it very difficult to sell up and move away if none of their children wanted to farm but if a young adult doesn’t really want to farm – are they going to be good at it?

There’s a lot more to farming than meets the eye really. For example, growing grass is much more involved than people think. Many think that grass just grows but there is quite a skill in good grassland management and ensuring that your cows are eating good quality grass to maintain high levels of protein and butterfat in a good supply of milk. Farmers also need to be able to think outside the box, work long hours, have a natural affinity with animals, have a good eye, do as many of their own tractor repairs as possible … and the list goes on.

When I was growing up, I’d quite a dismissive attitude of tillage farmers! After all, as far as I could see, they only farmed for part of the year as most farms in Ireland aren’t that large and they usually had tidy yards as they didn’t have stock whereas I saw my dad working all hours. Are farmers that just work with crops real farmers for example? Of course they are – it’s all a different form of farming the land, different skills are needed that’s all.

Are those who manage farms but don’t actually get their hands that dirty – are they farmers? Is Prince Charles a farmer, for example? Hmmm. He certainly cares about the environment, he owns a lot of land yet can he be considered a farmer? Probably – if one considers the UK stereotype of a gentleman farmer.

I do think that there are people who are farming who probably shouldn’t be. There used to be an expression that the first generation buys the farm, the second improve it and builds it up and the third buries it as in they lose money and it just doesn’t flourish. I’m not so sure it happens as quick as all that. ?I do think farmers looking to their sons or daughters to inherit need to be giving them responsibility from a young age though, be there to support them in their decisions but give them autonomy. Let them learn from their mistakes. I remember a young 19 year old buying Angus X Friesien heifers from us as sucklers. His father let him pick them out, let him bargain and was going to let him run that side of the business and I thought, more power to him.

I look at my husband and I know he’s a much better farmer than I would ever be. He’s much more passionate about his cows, he’s better at driving, he can pick up a cow on heat from 2 fields away, he’s much more sensitive to an animal’s needs, he’s more in touch with the earth too – I keep meaning to take a video of him using a sally rod to detect water underground! 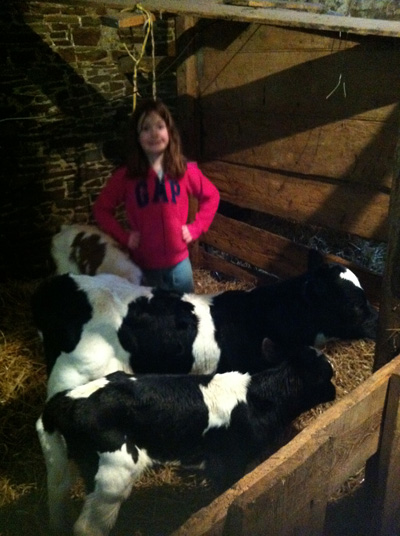 And on the 8th day, God looked down on his planned paradise and said, “I need a caretaker.” So God made a farmer.

God said, “I need somebody willing to get up before dawn, milk cows, work all day in the fields, milk cows again, eat supper and then go to town and stay past midnight at a meeting of the school board.” So God made a farmer.

“I need somebody with arms strong enough to rustle a calf and yet gentle enough to deliver his own grandchild. Somebody to call hogs, tame cantankerous machinery, come home hungry, have to wait lunch until his wife’s done feeding visiting ladies and tell the ladies to be sure and come back real soon — and mean it.” So God made a farmer.

God said, “I need somebody willing to sit up all night with a newborn colt. And watch it die. Then dry his eyes and say, ‘Maybe next year.’ I need somebody who can shape an ax handle from a persimmon sprout, shoe a horse with a hunk of car tire, who can make harness out of haywire, feed sacks and shoe scraps. And who, planting time and harvest season, will finish his forty-hour week by Tuesday noon, then, pain’n from ‘tractor back,’ put in another seventy-two hours.” So God made a farmer.

God had to have somebody willing to ride the ruts at double speed to get the hay in ahead of the rain clouds and yet stop in mid-field and race to help when he sees the first smoke from a neighbor’s place. So God made a farmer.

God said, “I need somebody strong enough to clear trees and heave bails, yet gentle enough to tame lambs and wean pigs and tend the pink-combed pullets, who will stop his mower for an hour to splint the broken leg of a meadow lark. It had to be somebody who’d plow deep and straight and not cut corners. Somebody to seed, weed, feed, breed and rake and disc and plow and plant and tie the fleece and strain the milk and replenish the self-feeder and finish a hard week’s work with a five-mile drive to church.

“Somebody who’d bale a family together with the soft strong bonds of sharing, who would laugh and then sigh, and then reply, with smiling eyes, when his son says he wants to spend his life ‘doing what dad does.'” So God made a farmer.

What do you think? Are farmers born or made?

6 thoughts on “Are Farmers Born Or Made?”