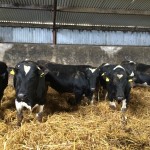 Although the weather would make you think it is the middle of winter, many dairy farms will be starting their breeding season in just a couple of weeks. We start it here around 4th May so it’s a while now since we chose the sires for our 2017 calving season. A lot of work and science goes into presenting the results, facts and figures for each bull and then by the farmer in digesting all of that and making decisions. This is how it works for us.

I’ll start by explaining what EBI is – each bovine is allocated a score when born based on the average score of its dam and its sire. This can vary in time, for example, if a calf’s sire’s EBI increases or decreases, it will affect the calf’s score. Once the female calf becomes a cow, her score will also be influenced by the volume of milk she gives, her solids (fat and protein scores), her lactation length, her calving interval (if she calves within 365 days or not) and many other factors.  However, in order for her offspring to improve on her performance, she needs to be mated with a bull with a higher EBI score than she has.  For example, if a cow has an EBI of €250 and is mated with a bull of €350, then the calf should have an EBI of €300 and an aim is that the offspring should have higher milk solids and volume than its dam. 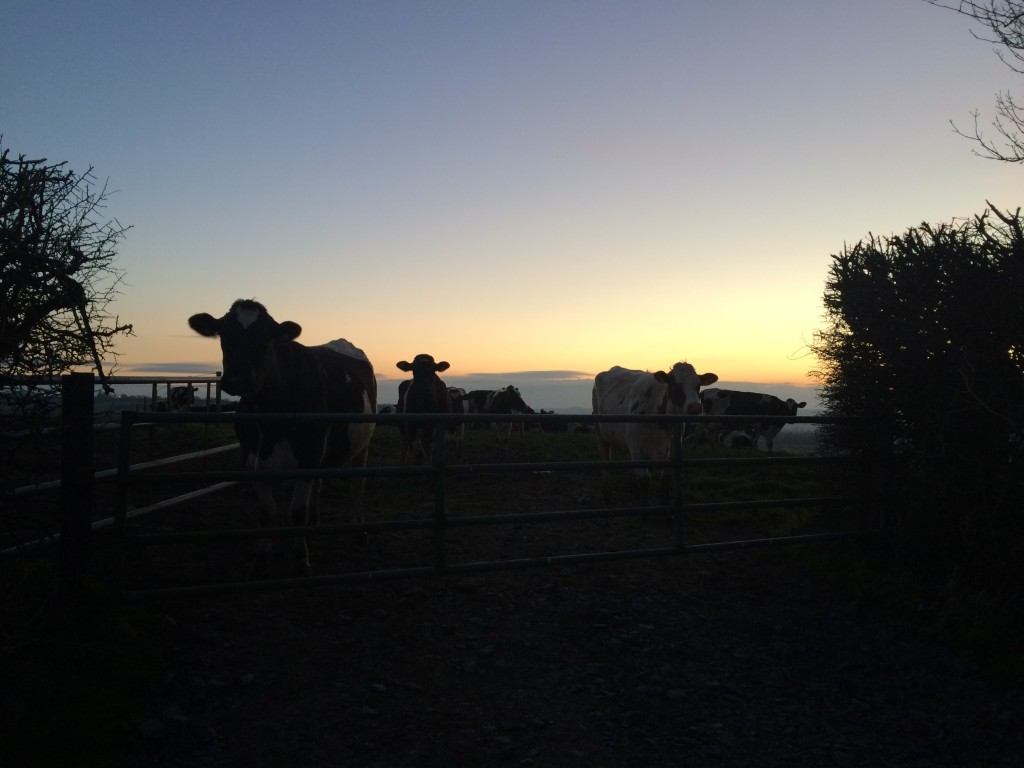 The herd’s EBI is created from the average of the scores of all the cows in a milking herd. Ireland’s national average for dairy herds is an EBI of €136, the top herd in the country has an EBI of €239. Our own EBI is €211 and I think we’re at number 15 or 16 in the country. Most herds improve each year. For example, of that €211 (of which €129 is based on fertility and €53 on milk), the 2015 heifer calves going in calf this May have an average EBI of €231 (of which €133 is fertility and €66 is milk) so once they go into the herd, it will lift it somewhat. We have 58 maiden heifers this year and have 24 of them available for sale with Grasstec at the moment.

Lucy is another old favourite, the mother of Lucifer (FGL who is a bull with Dovea Genetics). Her EBI is €291 and she is in her tenth lactation. Over the nine years, she has given an average yield of 1500 gallons per annum (540 kgs of solids) at 3.7% protein and 4.16% fat. She had a bull calf this year and he has been genomically tested and has an EBI of €350. The AI companies are now looking for bull calves as close to or higher than €400 now though so he wasn’t good enough. We’ll keep him as a bull though, either to sell or use him ourselves on some cows.

We have 11 yearling bulls this year for sale privately. Well, we’ll keep a couple. 9 of the 11 are pedigree and while most have an EBI of  around €300 (and one is Matchmaker’s half brother – we sold Matchmaker to Progressive Genetics two years ago), the highest is €333. It’s been fun choosing names for them! The son of Delilah just had to be called Samson, I had to get a Harry Potter reference in there so Polly’s son is Potter, Skye’s son is Stratus (I thought Cloud sounded a bit feminine). 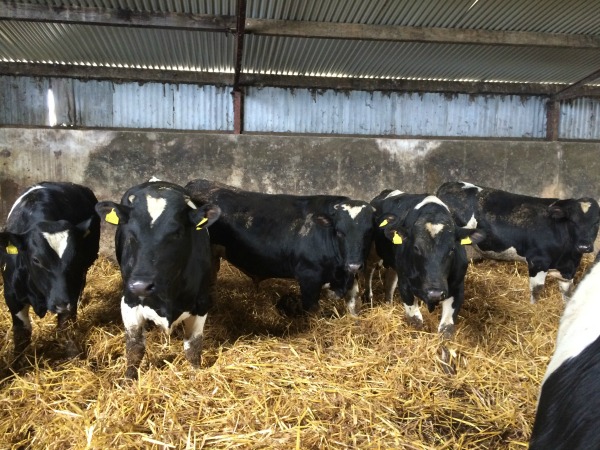 A couple have names that just stuck from when they were young calves. I don’t tend to name that many calves but sometimes a calf just strikes a chord for some reason. Barry was one of the first bull calves born last year and was a cheeky chap, his EBI is the highest of all. George came out shining, his stature when feeding was just steps ahead of his comrades in the pen and he’s one of the biggest yearling bulls of the eleven. They have all been fertility tested too.

Why is Artificial Insemination used?

The majority of our cows and heifers are impregnated with artificial insemination each year, semen from a variety of bulls rather than using ‘stock bulls’. This provides us with a great range of bulls, usually of a better standard than stock bulls and proven (as much as is possible) to be fertile and to be capable of providing calves of good dairy merit. It can happen that bulls become temporarily infertile so relying on a stock bull to impregnate 40 or 50 cows can carry risks.  There’s a huge cost if cows don’t go in calf or even if the birth is delayed by six or three weeks. The aim is to get a cow to give birth once a year, once every 365 days and if that is delayed, there’s a financial cost.

By using a number of bulls, it cuts down on risk of infertility but also in case the calves weren’t quite what you wanted. For a couple of years we had a few heifer calves from one bull that we stopped using because they were so hard to train in to milk in the parlour, much worse than any others.

It’s really important that proven ‘easy calving’ bulls are used on heifers (those calving for a first time), that the calf is small and she is able to give birth easily to it. The difficulty in this is that it takes time for a bull to be proven to be ‘easy calving’ and as heifers are usually the highest EBI animals in the herd, it can be tempting to use a high EBI bull on heifers so the calves will be more valuable. However, the results can be serious if the heifer has a tough time calving or has to have a caesarean section. Apart from the expense of the vet, the calf might be dead, the heifer will take time to recover, her milk volume will probably be reduced and she will probably take longer to go back in calf. She may even have to be culled. Add to that the stress of assisting a heifer in a tough calving and wondering if the next heifer calving will be as bad and it surely doesn’t seem worth it. Therefore, we use proven ‘easy calving’ bulls on our maiden heifers.

How We Choose Sires

Each farmer will have different wants for his/her herd. The fertility of our herd is quite good so we want to continually improve the milk solids (protein and butterfat). The reason for this is that the higher the solids, the more you get paid. For example, we were paid 3.5 cent more per litre than the average in 2015 so it’s important to keep working on them. Now that our herd is pedigree, we have to use bulls that are pedigree. While the overall EBI score is important, we also want to use bulls that deliver approximately a +.2% or more in fat and protein. By using a sire like that, it should result in the offspring having +.1% higher protein and fat than its dam (mother). 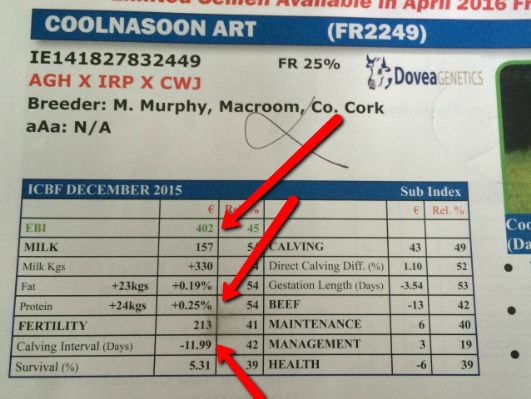 The first year we came back to farming, all of these figures looked a bit like gobbly gook. The overall EBI (the top figure) is the summation of all the scores. This one is pretty high at 402. We’re using this guy as one of our 9 bulls as the fat and protein have a good +.19% and +.25% score which will help to improve the milk solids of his offspring. The calving interval can be an important one too – especially if AI’ing a cow later in the breeding season. We have used Hereford AI straws on occasion (used ten last year and got 5 hereford calves from them) and the one disadvantage is they tend to have a longer gestation – up to 10 days longer than Friesian bulls.

You’ve probably heard that milk prices have decreased worldwide and yes, it’s the same in Ireland. It’s going to be a tough year. With the wet spring, I don’t want to think what the extra meal and silage is costing. We had an ‘extra’ silo of silage that we didn’t think we’d have to use but are more than half way through it now. No point complaining though although if the man above sends some sunshine, we’d all be happier! 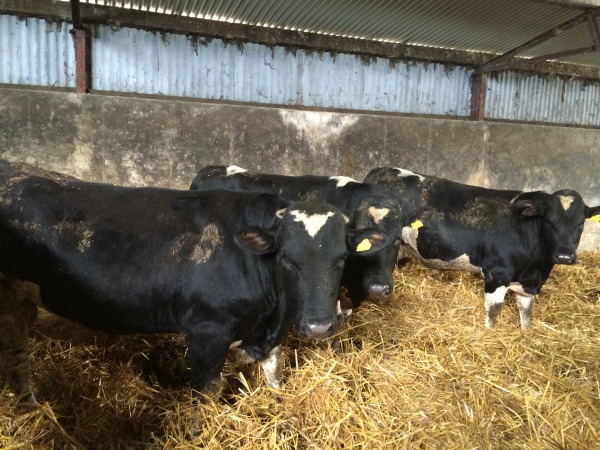 As you can see, there’s a lot to consider when looking for a bull or AI bulls for a herd of cows. It’s quite exciting each year at calving time. Most of our best cows this year had heifers. We will be getting all the heifer calves genomically tested (which involves pulled some hairs from their tails and sending them off to be DNA tested) and it’s always interesting seeing the results. A number of bull calves have been genomically tested by AI stations and while none of them have been accepted this year, we will probably keep a number to sell as stock bulls.

And of course, if you’re looking for a Friesian stock bull this year, do check out our advertisement and get in touch. If you’ve any questions about any of the points made above, please do ask in a comment.