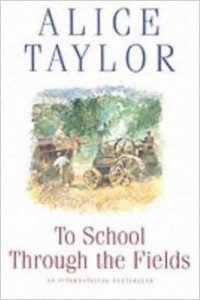 Alice Taylor has written many books and I recently purchased three of them, reviewing two of them here. From Co. Cork, Alice recounts her childhood years in To School Through The Fields, it would be a nostalgic read for people from that era. I know my dad will enjoy the accounts of the threshing machine and neighbours coming to the yard, the planting and harvesting of potatoes and turnips and the riding of the farm horses. What really came across in this book was her poetic account of the relationship between farmer, his land and his animals. How farmers worked with nature and with a heavenly presence to bring their work to a successful harvest each year.

I walked in the gap and there across the furrows of brown earth, the man, the plough and his horses were silhouetted against the darkening sky. The last rays of the winter sun haloed these three in a fusion of soft light. I held my breath, afraid to intrude because I felt that I had come on a holy communion of nature, God and man. My father, who worked with the earth, had a closeness to nature and a full acceptance of its laws and the laws of God.?

There is plenty of humour in the book too – from her accounts of her fearsome grandmother, of callers, of workers, of travelling salesmen and of her school days. ?How a neighbour named Paul didn’t attend Mass, happy to spend time in his fields and once drove the parish priest from his farm by bringing his stout stick down on the horse’s rump and making it rear up and leave hastily. The fact that Alice ?thought a ‘hoor’ was a cow that didn’t go where she was supposed to go is probably mirrored by many farming children.

You will find tears prickling at your eyes too when you read of how her younger brother died at a young brother. You will ache for her mother whose white face matched that of her ill son.

Although her father had Protestant roots, the family seems to have been intensely religious with everyone on their knees every night to say the Rosary. Her father wasn’t as religious as her mother yet he seemed happy to attend Mass with his family but always listened to the King’s speech on Christmas Day as a nod to his heritage. 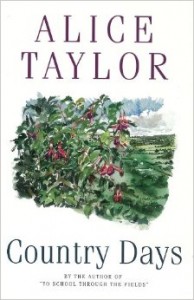 Country Days is a memoir of happenings at various stages of her life – from when she first fell in love at 13 when she was staying at her grandmother’s and the week holiday was extended to month to her father’s funeral and to when she published her first book and was interviewed by Gay Byrne in 1988. As a non-Catholic I was amused and horrified by her pilgrimage to Lough Derg – it sounded like mild torture although she did make it somewhat funny.

I was also amused by her accounts of cleaning the house. It sounds like she was a woman after my own heart – easily distracted from doing housework yet when she made up her mind to clean, she went for it with a vengance. I must add that while I’ve driven out occasional spiders and plenty of cobwebs in my time, I’ve never come across mice! We set some traps two weeks ago as they tend to come in at this time of year and caught two but none since so hopefully that’s an end to it. I’m a complete wimp when it comes to mice and Brian has to set the traps as well as get rid of the dead offenders.

I loved her final chapter when Alice described the comments she received when doing a book signing for her first book. I know I’ve come across this one too:

“I could have written that book myself,” she informed me, “only I hadn’t the time. Writing is all right for people who have nothing better to be doing.”

I remember a friend who was stocking my book telling me of a conversation she heard “Humph, does she really think she’s a farmer’s wife. I’d be able to show her a thing or two.” That did make me chuckle!

I thought both books were charming with interesting insights into a bygone age. Perfect for a wintry afternoon by the fire. I know my dad will enjoy both of them.