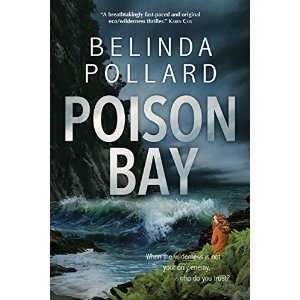 I enjoy reading Belinda Pollard’s blog posts about the researching, writing and editing process for her debut novel Poison Bay so the book was on my to read list. I guessed it would be good but I’d no idea how good. I read it on holidays last week and I wouldn’t have put it down only we had booked to go on a trip that day. As it was, I was thinking about the book for half the bus trip.

Eight friends from high school meet up ten years after their graduation. Just before they graduated, one of their group of nine friendscommitted suicide because she was pregnant. The father of the baby was one of the eight. Partly due to the horrific event, most of them lost contact until Bryan arranged a hiking trip through some of New Zealand’s most difficult terrain for the eight of them. Very wealthy, he even paid for the trip and all of their necessary hiking gear.

Callie is the narrator and ?it is in the third person. We learn of her broken heart and her hopes that the trip will help distract her. As they start the hike, they find out how much they have all changed during the ten years and yet, how much they stayed the same. It is an arduous hike and while the mountains may be one serious threat, another is a murderer who seems intent on killing them one by one.

I was gripped by this tale. Would the survivors reach safety? Would anyone miss them and come looking? Would rescuers find them? Would the survivors escape being murdered in time? Which one was the murderer? Who would be next? Would all eight be killed?

I didn’t know which character to trust. This was scary.

Sharon was the first victim of the murderer so she wasn’t a suspect. Murdered for her weakness and because she was hampering their progress or was it a random murder? Was the murderer one of the others or was it someone who was following them and going to knock them off, one by one?

The author sets up each character to have elements that just made me wonder. Rachel was the only one I didn’t suspect – mostly because she was most likely to die due to her need for medication and partly because her mother became involved in the search. Surely the author wouldn’t be so cruel to kill off a character when I felt so deeply for her and for her mother. Or would she?

I suspected Bryan – did he survive the fall? If he was dead, was he going to kill them all via the threatening terrain – would they all die by ‘natural causes’?

I suspected Adam – partly due to Jack’s comments on his killing instinct for killing animals for them to eat.

I suspected Kain – partly because he seemed a surly chap and partly because I was thinking of the Cain and Abel story – wasn’t it Cain who killed his brother?

I suspected Erica – as a nurse, surely she should be more capable of saving lives. Was she in cahoots with Kain as sleeping with him?

I also suspected Jack, even though he was close to Callie (narrator) and she seemed to trust him. Was he filming it all so that he could show himself as the sole survivor in a documentary? Was the author going to play a trick on our emotions and reveal him to be a killer?

I even suspected Callie occasionally.

As one after another dies, I felt like I was on a rollercoaster – wonder if any would survive and not knowing who to trust. Will Rachel’s mother be able to persuade the authorities to start looking for them? Will the local police smell a rat and start investigating? Will it give them enough time? Can they survive the incredibly harsh conditions?

It reminded me of an Agatha Christie book I read many years ago (and the name escapes me now) when ten characters are all invited to an island for some reason and one by one, each of them are killed. However, Poison Bay had much more action and intrigue.

Well written, you will travel through the New Zealand wilderness when you read this book. Your emotions will flail about and you will not be able to put down this book. Best book I’ve read for months – the bar is set high for my other reads for 2015.

Last year I set myself the goal of reading one book a week and I exceeded it. I didn’t keep count but I reviewed about 45 books here and probably read an additional 30. This year, I hope to read just as many but plan to read more indie books.