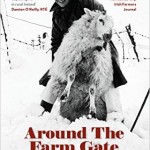 Around The Farm Gate is a collection of 50 stories about Ireland’s farming past, told mostly by people with childhood or young adult memories of living on a farm in various parts of the country. 500 stories were submitted and 50 were chosen. 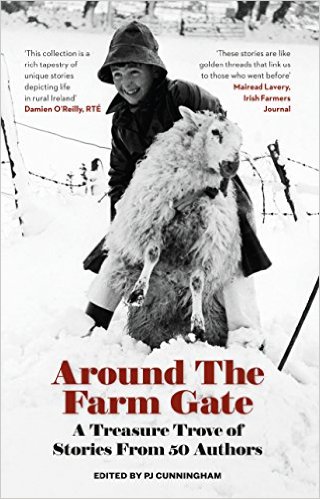 ers like teaching and how very few are farmers as adults. It emphasises how the numbers of farmers in Ireland are decreasing, how such a large proportion of the current adult population were either brought up on farms or have memories of visiting a grandparent’s farm during their school holidays. Other countries are experiencing problems with consumers’ lack of understanding and appreciation of the production of food. As much of Ireland’s population is only one or two generations removed from the land, it remains to be seen how Irish farmers and indeed, organisations like Bord Bia, work to inform and educate consumers about our production of food in the future.

As every reader will do, I have my favourites amongst these fine stories. I loved the sting in the tail ending of ‘The Great Turnip Swindle of 1955’; the sense of familial relief in ‘Milk Cheque Joy’; the job of keeping cows safe in ‘Cows at the Cliffside’; the selling of a favourite cow in ‘The White Cow Whinger’; the revealing of true life for many families of small farms where the father worked abroad for most of the year in ‘The Bend At The Church’; the fact that a farmer is always a farmer until he/she is six feet under in ‘Crossing the Great Divide’; the anxiety of potato farmers until all the potatoes had been shipped and the money received,  and the extreme of emotions in ‘A Day in the Life of a Farm’.

Having heard of the extreme snow during 1947, it was interesting to read ‘The Big Chill of 1947’. Many of the stories evoked memories of my own childhood (and I’m sure other readers will find the same). From bizarre but true country cures; families having one cow for milk for the house (though I never heard of cows being brought on holiday before); bachelor workmen dressed in black and looking identical to a young child; the despair when you are given a job but the livestock don’t do what is expected of them and you end up racing along feeling helpless and eventually giving way to tears. Our farm got a milking parlour in 1964, five years before I was born, but I remember visiting neighbours milking their cows with a bucket plant. One story compares the hand milking of the cows to the comparative ease of milking them with a machine from a pit.

My favourites were the stories that included humour or sadness. While some were beautiful in their romanticism of a past rural life, I preferred the ones that revealed the hard grit of our predecessors in what was, after all, a life of hard work with few amenities – although of course, farming families were often lucky and fared well compared to the landless population.

Most of the stories hark back to the 50s- 70s although there are some more modern memories too. It is a piece of history in the making.  I was delighted to have my own story included in the collection and to give you a hint at its contents, it references the feeding of silage contractors as I grappled with becoming a Perfect Farm Wife!

Around The Farm Gate is available in all Irish bookshops, online at Kennys.ie and on Amazon. If you have read it, I’d love to hear what you think.