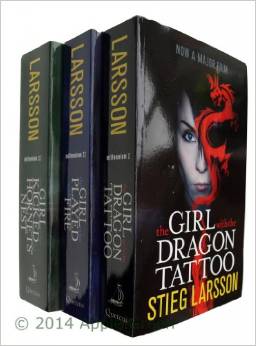 This will be a short review as I’m off to the UK tomorrow for two days and I still have lots of things to do! ?I first read Stieg Larsson’s Millennium trilogy over the Christmas of 2009. The children bought me the third book for Christmas and wrote on it including the date which is the only reason I remember which Christmas it was! ?I flew through it then and have always intended to reread them at a more leisurely pace so that’s what I did over the last fortnight.

The only thing that hindered the enjoyment slightly was the fact that I have watched both versions of the ‘Girl with the Dragon Tattoo’ on DVD and although I enjoyed both films, I kept picturing Daniel Craig as Blomkvist and working out what was different between the first book and the DVDs.

All 3 books held my attention, tracing Lisbeth’s journey as she fights back against the system, those who have a reason to return her to the asylum and to keep her under control. She has very few on her side – her boss Armansky, Blomkvist and her previous guardian Palmgren. The book is vicious in parts – murder, rape, torture, and some of the scenes can be very descriptive! ?She is a very different and original heroine and her relationship with Blomkvist is very different to the standard ‘chemistry’ between the two main characters in most crime novels. There’s plenty of sex in the book too, though none of it is explicit (apart from the occasional description of rape and torture). One thing that I did find a bit irritating was the number of times that Erika and Blomkvist’s sexual relationship was explained but that was just because I read all three books within a short time frame.

Swedish crime novels are among my favourites now, I read Jo Nesbo’s series following my enjoyment of Larsson and enjoyed all of the Harry Hole books too.

Each section in all three books is preceded with a report on the existence of female warriors in the past as well as statistics on the incidence of sexual assaults in Sweden – surprisingly high unfortuately. ?It was interesting to read a series of crime novels with a strong feminist thread throughout – both in the plot and in these mini reports. ?It’s such a shame Larsson died before he saw the colossal success of his books plus the fact he would probably have written many more crime novels.