Do you know many orphans?

The one that comes to mind for me is the fictional Harry Potter, losing both his parents when he was a baby, both of them mercilessly killed by the evil Voldemort.

The line that comes to mind is the one uttered by Lady Bracknell in The Importance of Being Earnest:

Lady Bracknell: To lose one parent, Mr. Worthing, may be regarded as a misfortune. To lose both looks like carelessness.

It seems strange to think that there are orphans in the Western World. Yes, it will happen that there are car accidents when both parents may be killed but to lose both parents to illness when we have such advances in medicine now – surely it is rare? It seems that is not the case. 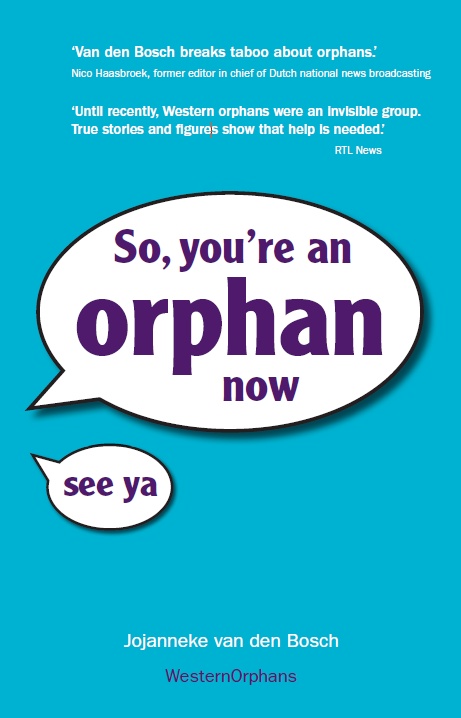 When I met Jojannke van den Bosch this summer and she was telling me about her self published book So, You’re An Orphan Now and her own experiences of being orphaned at the age of 14, I wondered just how many orphans are there in Ireland and Europe? How terrible it is to lose one parent at a young age but to lose two? And yet, with the increase in single parent families, there may well be an increase in the number of orphans in the future.

We tend to associate the word orphan with children from African countries whose parents have died of AIDs or the children in impoverished countries where children have been put into orphanages, often because the families cannot afford to feed them. But in Ireland – how many are there? According to Jojanneke’s book, there are 29,000 in Ireland, 34,000 in Holland. The Irish number may include those in foster care but with living parents. I know there is a ‘Protestant orphanage society’ whereby funds are raised to support children whose parents have died. It was founded in 1828 when the Protestant population was more than 20%. ?The Protestant population in Ireland is tiny, less than 4%, yet the society continues. I was unable to find out how many orphans there are receiving support though.

When I thought about it, I realised that I did know one person who was an orphan. A good friend of mine lived with her aunt and uncle and 2 of her 4 siblings after both her parents died before she was two years old, leaving 5 children aged 2-12. It still seems incredible that young children lose one parent, let alone two.

Jojanneke was orphaned at age 14. Her father was 64 when he died from a massive heart attack. Her mother died five months later after a long struggle with cancer. Jojanneke had an older sister and three older half-siblings from her father’s first marriage. What surprised me was that Jojanneke and her sister were really left on their own in terms of getting work, selling furniture and generally struggling to meet the rent and buy food. While teachers gave them some allowances for missed school, they really were left to get on with it on their own. I started wondering if it is the same here in Ireland? After all, it’s not that long since the last orphanages and industrial schools were closed. I only had my friend’s experience to draw on, presuming that as families in Ireland are so large and usually so close knit that aunts and uncles would take in orphaned children, this doesn’t happen in too many places by the sounds of it.

Jojanneke shares the story of how she moved from her home town, how she lived with a friend’s family for a few months and how she regarded them as her second family but she was largely forced to be independent. Reading it, I couldn’t help but think of all the people who could have helped this teenager, from teachers to social workers to parents of classmates. Towards the end of the book, a chance meeting with an old classmate from the class above reveals that they all thought her parents’ deaths were fictional, that she had made it all up . ?It just makes the mind boggle that a woman’s death in a community wasn’t news, that parents didn’t talk about it, that children themselves didn’t hear of it and consider how lucky they were. The gossip in the Irish community may drive me mad at times but there’s a positive side to it too!

At the end of each chapter, Jojanneke has a section on suggestions for those who are in contact with orphans, that even if you aren’t a caregiver, you can still help the child in some small way. It also brought home to me how childless children want to find out even the smallest snippets of information about their parents, how people often don’t want to bring up the topic but perhaps the dead should be talked about more regularly. I remember my gran telling me a short story about my friend’s father and I told my friend, it was something she had never heard and I’d a feeling she treasured it. ?Jojanneke also has suggestions for orphans at the end of each section too – what they can do to help themselves, including how and why they should reach out to others.

This book isn’t just for orphans. It has a lot to offer for those who wonder what they should say to those who have lost family members, particularly those who are young. It also serves to remind us that we’re not as invincible as we think we are, that as parents we have responsbilities to leave our children provided for if we can, and to leave a will stipulating who will look after them.

So, You’re An Orphan Now isn’t a depressing book at all. Some parts make for grim reading but it is a story of resilience and determination. It also makes very clear that there is much work to be done helping children and teenagers who are left parentless. You can read more about the book, see sample chapters and buy the book at Western Orphans.