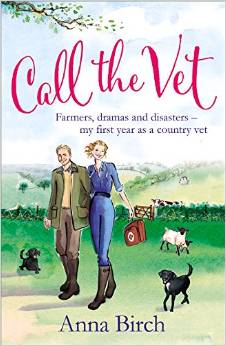 Call The Vet starts with Anna Birch on a call to a tricky medical situation with a cow – it calls for a wine bottle (as a tool!), she is splattered with all kinds of gung and because her new abode doesn’t have have hot water, she is forced to rinse off the gunk with sugary warm coffee from her flask before she falls asleep. If anyone is thinking veterinary medicine is glamourous, they’d certainly think again after the first couple of pages. One ?wouldn’t be blamed for wondering what decade did she start her first year as the mention of the wine bottle reminds me of one of Herriot’s cases.

It’s evident Anna is a likeable person and she isn’t bashful about revealing her insecurities and her failings. It will certainly remind you of the James Herriot books and indeed, Anna refers to Herriot on a couple of occasions – at one point she envies the fact that he wasn’t contactable by mobile phone and how he could go into the farmhouse for a cup of tea or a bit of hot dinner whereas she has to dash off to the next case.

The writing isn’t up to the standard of James Herriot but hey, he’s a master. There are many similarities though albeit told in a different style. The characters or animals aren’t quite as well rounded or developed as in Herriot’s. Who could ever forget Tricki Woo (or whatever he was called!) or the hysterically funny relationship between Siegfried and Tristan? But there are plenty of interesting characters and relationships there – from her bosses, the relationships with the different receptionists, how she feels she is a total failure at training her own dog and his repeated insistence at catching pheasants, her love life and her trip to Ethiopia.

I think the front cover might be a bit too ‘chick-lit’ for my liking even though it is a sketch, maybe they are aiming for that target market or if it included a little more humour within the design perhaps. But I’m far from being an expert on front cover designs!?It’s an enjoyable read – perfect for a wet Saturday or Sunday afternoon.