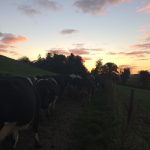 Telepathy fails sometimes doesn’t it? Even on farms? So what do you need instead? I’ve concluded a dog and a mobile phone are essential requirements. Although we have to bear in mind that a mobile phone doesn’t always work. A dog? Well, that’s up to you to ensure you have a good one – or at least know its weaknesses.

These events happened a couple of months ago, late March and early April, when the cows were out but it was getting dark around 9 pm.

The cows were going out after a late evening milking. I had walked on ahead of them. The field is accessed from a public lane so I had to put gates and wires across to make sure they headed in the right direction. As you may remember from previous posts, it’s not unknown for me to forget to shut a gate lower down on the farm or even, when in a world of my own, inadvertently open the wrong gate almost unknowingly but I get it right 99% of the time. 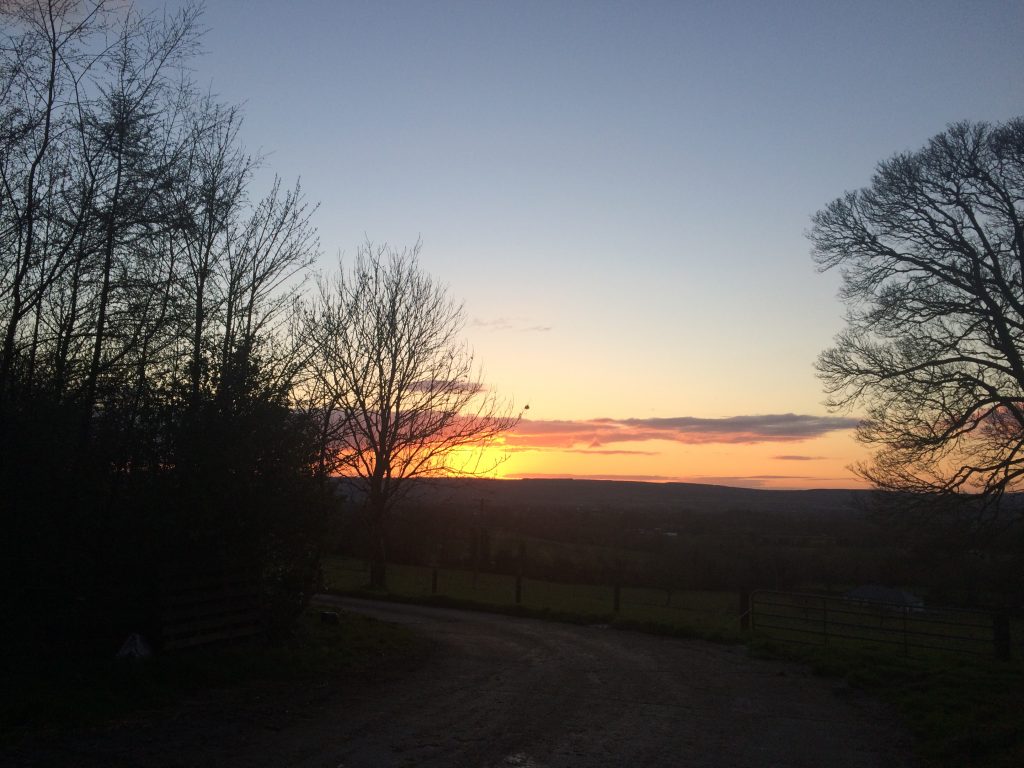 The dogs are put in their houses during milking as it can be tempting for them to continue to “herd” the cows when in the collecting yard. I always get Lou out to come along with me when I’m putting out the cows. She probably wouldn’t be much protection if someone decided to hit me over the head along the lonely lane but she loves it and I enjoy her company. I was strolling along having put the first gate across. The second gap delayed me for a few minutes as the wire had got into a bit of a knot. As I neared the gate of the field I had to open I could hear cows coming up behind me and thought to myself “goodness, they were quick”. Typically, the double gate going into the field had been hit with a digger since I’d last opened it and I didn’t know the  left gate now didn’t open. I struggled with it for a second and then pushed the right one in just as two cows passed me and headed down the lane. I shouted at Lou to “bring them back” (We don’t use “comebye” or “away” and the other sheepdog type commands – it’s mostly “bring them back”, “bring them out”, “wait” or “stay behind them”) and within seconds she had. About 15 cows went into the field. I was so relieved to have got the gate open in time and the two cows back that it took me a minute to realise that there weren’t any more coming. I sent Lou off to get more and she arrived back with a single cow who dutifully went into the field.

It was time to call reinforcements. I rang Brian but of course it went to message (bad signal in the yard) and started walking back. He rang me back seconds later to say the cows had arrived back in the shed, they had raced into it, what on earth was going on?

He and Sam brought the cows back up but then I got another phone call. The cows had been very hesitant to go out onto the lane and then 100 yards along, at the place where I’d put up the second wire, they were refusing to move. Was there a wire along the ground that was spooking them?

Thank goodness for torches on mobile phones as it was almost pitch dark by then and as it was a cloudy night, there wasn’t much light from moon or stars. I made my way along the lane again, Lou looking at me like I’d lost the plot altogether, and came to where the cows were standing, digging their heels in as they just weren’t moving. There was nothing along the ground but as I called to them and started walking back, they started following and we got them into the field without any more mishaps.

Something, perhaps a badger or a dog, must have crossed the lane as they were coming along and somehow, for whatever reason, it spooked them so much that the first 15 or 20 cows bolted forwards and the rest fled for the refuge of the farm. It could have been a lot worse! 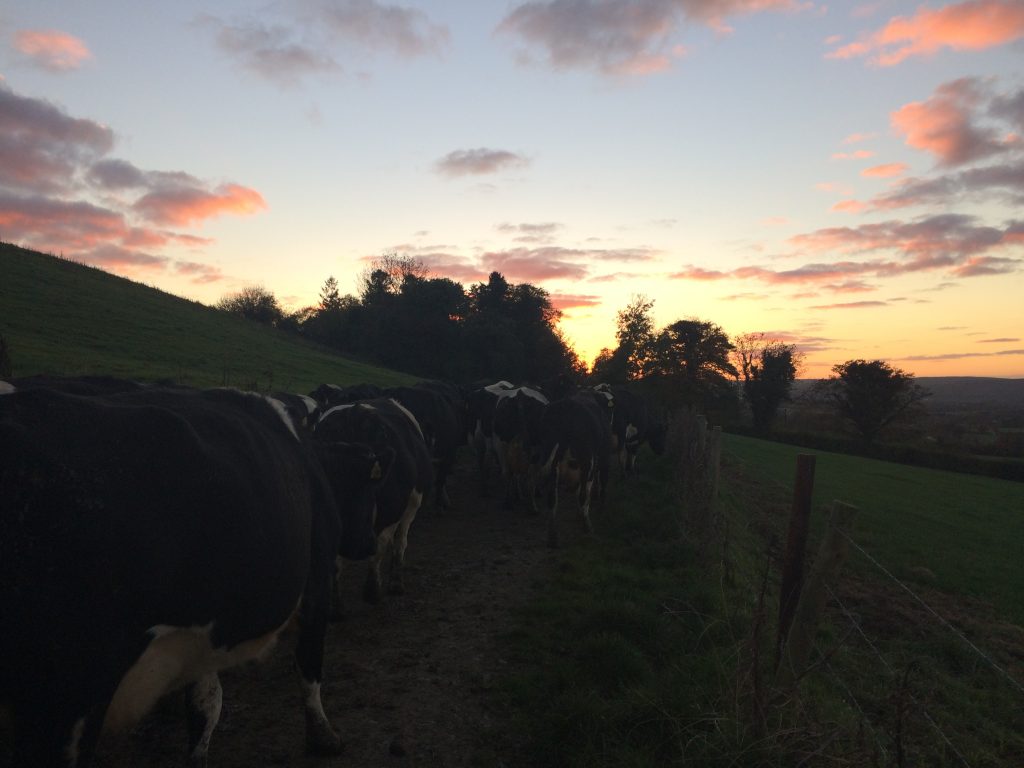 Cows going out to grass on a beautiful evening

A few days later, most of the cows were in one of the furthest fields for the day. A couple of cows were kept back as they were having a pedicure and a poorly cow was kept in too. Brian let them out to a nearby field around midday.

That evening, I decided to feed the calves getting milk replacer before I brought in the three cows. There was no point in them standing for longer than necessary waiting to be milked, they might as well be lying down chewing their cud in the field. By the time I went to the field to get them, the light was fading to dusk. I couldn’t see them anywhere from the gateway but there is a dip in one corner of the field so I guessed they were over there and headed over. No sign. Were they in the tiny copse that divided two fields? No. They are always put in this field in this situation – why weren’t they in it? Cursing, I rang Brian to see what other nearby field had he put them in. No answer of course as there’s no signal in the milking parlour. Back I went and even though it’s a nearby field, it’s still a bit of a trek. “I put them on the ‘top of the lawn’” he said “Did I not tell you?”

I might have snarled “you were obviously depending on telepathy” at him but went to check on the cow calving (feet out) and back around to the “top of the lawn” field with Lou wondering what on earth I was doing. I soon spotted two cows but there was no sign of a third. I couldn’t let Lou off to look around the field as there were heifers in the adjoining field and I was afraid she’d misinterpret my instructions and decide to round them up. I was in that catch 22 situation. If I brought in the two, I’d be told that there was another out there. If I went around the field looking for the third, I’d go back to find he had kept her in for some reason and forgotten to tell me. We brought in the two and I hollered at Brian “Did you let out two or three cows? I could only find two”. 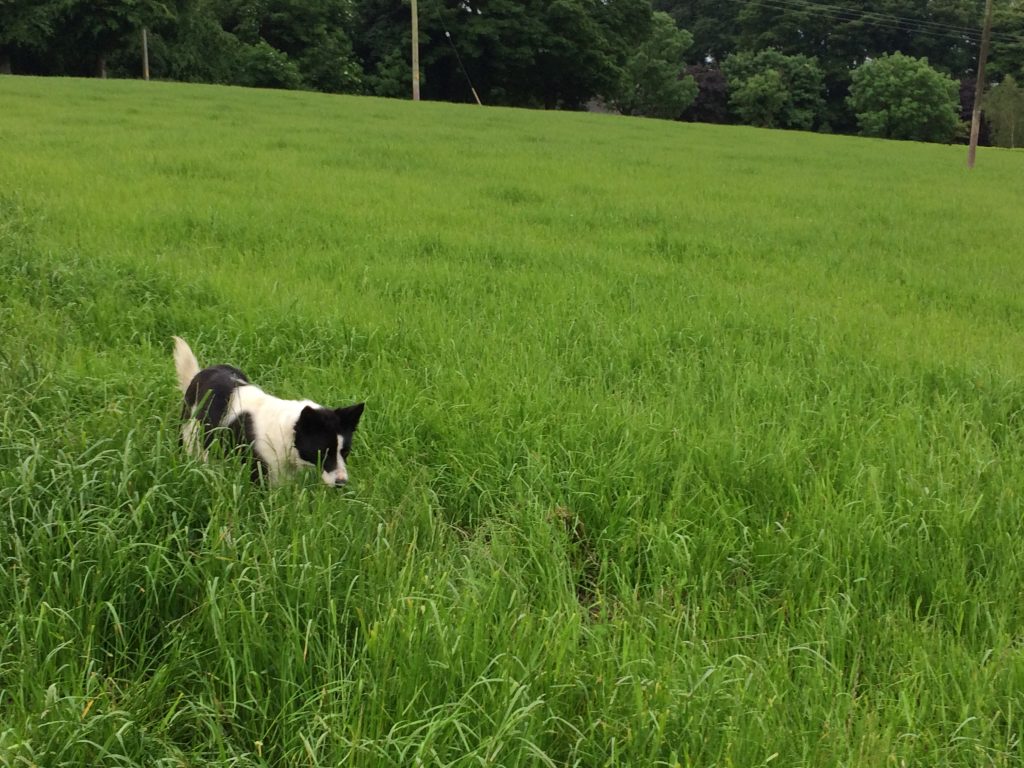 Of course, it was three. By this stage, the cow calving needed minding so I had to wait a few minutes for the calf to be born before I headed off yet again. Using the trusty torch on the phone, I followed a track through the long grass but came to a large flattened area of grass where two or three cows had been lying earlier. The heifers were looking balefully at me through the wire and still so sign of the ruddy cow. Off I headed in another direction and suddenly Lou ran on ahead of me, she had found the cow who was begrudgingly getting to her feet as Lou circled her. She would have been happy to stay there all evening, full udder or no full udder.

At least she was back in time to be milked in the last row, alongside the new mum. By the time I’d fed the last of the calves, fed the newborn and brought the new mum back to her calf for the night, it was another late one!

It’s evenings like these two that are part of the reason I prefer not to clock-watch. Sometimes things go wrong and an hour can be added to your evening very quickly. We never had a good dog (or mobiles of course) when I was growing up. How on earth did we manage? Maybe we’ve lost our telepathy skills!

One thought on “Farming Essentials: Mobile Phones, A Good Dog and Telepathy but 2 out of 3 ain’t bad”