I loved Khaled Hosseini’s first two books, The Kite Runner and more so, A Thousand Splendid Suns. And The Mountains Echoes didn’t disappoint yet I didn’t think it was as good as A Thousand Splendid Suns – I think most readers would have felt so strongly for its two main female characters, the novel would just have stayed with them for months and years. 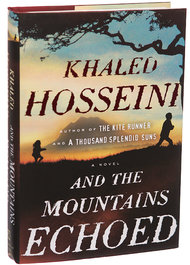 This novel spans many decades of life in Afghanistan and of the characters who emigrated during war. ?Its main focus is the tale of a family that is continually separated but the initial separation that caused the most pain was the giving up of a 4 year old girl Pari to a rich childless family, a sacrifice her ten year old brother never forgot. Pari always grew up with a sense of loss and suspected she had been adopted. Abdullah felt that loss fiercely all his life. This tale is interwoven with that of the neighbours who emigrated, their uncle who is chauffeur to the rich family, the wealthy warlord who replaces their village with a rich compound, the plastic surgeon who works in Aghanistan after the war, charity workers, Pari’s adopted family and those she forges relationships with and much more. Covering many decades as well as characters living in various countries, it is a well written novel in that it doesn’t confuse even though there is quite a lot going on at times. It emphasises the changes for some Afghan women as Nila is described in quite sensual language in terms of her attire and the amount of skin exposed – very different to the images of the burqa. Of course, that is contrasted with life during the Taliban.

Extreme poverty is very evident contrasted with subsequent wealth that some Afghans achieved in America. Two cousins visit their home street after the war and although one is described as brash and a show-off, he is the one that comes through for a young girl who needs a life saving operation and goes on to become a celebrated author. Topics include poverty versus wealth, health versus illness, beauty versus disfigurement, homosexuality, filial love, separation, adoption, emigration and much more.

I enjoyed this book but felt that I’d have preferred more writing about the main characters – more about Abdullah’s life for example, than many pages devoted to a Greek plastic surgeon and a woman who was bitten severely by a dog at a young age. ?It meant that many of the characters felt rather superficial even though there was scope for me to feel really affected by the novel. ?I enjoyed it and would recommend it – huge skill is needed to write a novel spanning so many characters and so many decades.

Have you read it? What did you think?

3 thoughts on “Friday Book Review: And The Mountains Echoed”