It’s not deliberate that I haven’t been writing about the farm lately, well, not really. ?It is just that it has been so so wet that it is somewhat depressing and the last thing I wanted to do was write a blog post that complained especially when I keep seeing blog posts and pictures about the drought in the States which is worse I think.

It’s frustrating too as it makes it so hard to make decisions. It’s hard to decide where to go on a day out with the kids let alone make farming choices 😉 . We went to Lullymore in Kildare on Thursday for a day out and for the half an hour that there was heavy rain, the children were able to play in the indoor play area and then we went out into the sunshine again. 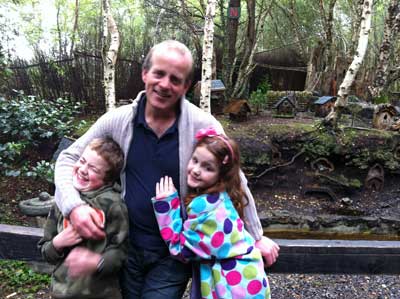 We have one lot of bulls inside, brought them in earlier than planned but they are the biggest lot and we had planned to start fattening them earlier to get them to the factory earlier – partly for cashflow reasons, partly to ease the workload at calving time and partly cos it is possible to do.

It is turning out to be an expensive summer as cattle are in and out, depending on the weather, it is hard to plan as sunny days are a bonus as the weather forecasters seem to predict rain on a daily basis so it seems like luck if we don’t get a heavy shower.

We have 2 more batches of bulls out on what is fairly heavy land and one lot was getting particularly raucous with as Brian described as ‘rowdy hoors’ in it! ?Having a good dog is invaluable when dealing with rowdy cattle. Sam has got to the stage that he gets bored bringing in the cows as they are safe and predictable. He LOVES working with the bulls, they are so much more of a challenge and he knows he has to be on his guard with them. Brian and Sam brought them into the yard and I stood there to point them in the direction of the small shed there temporarily. ?Brian told me to open the door of the tractor in case I had to jump for it which worried me slightly but they were fairly well behaved – they really bellow though. 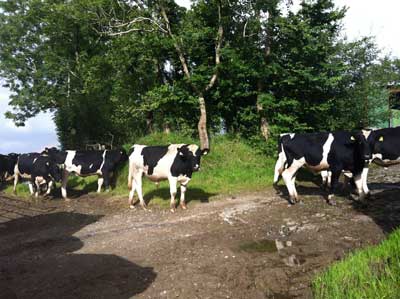 We then had to bring them down the lane to the home farm and into the large shed. At ?300 per ton of meal – it is going to be an expensive summer and autumn as we fatten them. 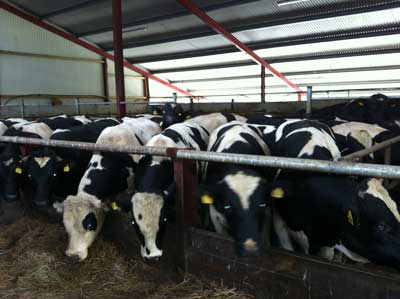 We all thought 2009 was a tough summer with plenty of rain and low prices for milk but this year is much worse in terms of weather. Milk volume is down and we’re having to buy extra meal for the cows as well as buffer feed them with silage on wet days. Milk price is down too which means we’re getting ?3.5K per month less each month which is making cashflow a bit of a challenge.

However, there are farmers that are worse off, apparently 10% of dairy farmers still have to cut their first silage. ?There’s lots of slugs in the long grass now too and apparently this can kill cattle if they are fed silage with slugs. Sounds disgusting as well as disheartening doesn’t it?

We bought straw from a farmer that had it in storage from last year and paid ?10 a bale from it. Brian wanted to get it in while the weather was wet and he wasn’t able to get to do much else on the farm. ?With fodder being short for many farmers this year, many will be buying straw to feed with meal, so straw will probably be more expensive this year too so we’re glad we’ve got that job off the list!

Here’s hoping for some sun over the bank holiday weekend 🙂