I went to the Women and ?Agriculture conference in Kilkenny today which was organised by Mairead Lavery and the team at Irish Country Living (of the Irish Farmers Journal). ?When I walked in, the first stand I saw was that of ‘magic’ window washing equipment and I thought ‘oh no’ – are they going to be pigeon holing us like that! Other stands included lovely cake sellers, hat sellers, IFA, FRS, charities etc. Many ladies got free head and shoulder massages and manicures during the day. Having sliced off half of one of my nails with the potato peeler while in a hurry the other day, I decided to give the manicure a miss!

The ‘motivator’ was getting all the ladies to stand up and wave and stretch but as I was tweeting, I resisted the urge and as a man came over to me (I thought to tell me to get up!) and provided me with the hashtag. ?Yay, I thought to myself, there will be lots of people tweeting. I really enjoy attending events where the delegates are tweeting – you get to meet up with fellow tweeters at coffee, you get to read other people’s opinions and it is like having a conversation while the conference is going on. I like tweeting too, it is like note taking and from the conference’s point of view, it spread the words and gives them feedback. ?But it turned out I was just about the only tweeter using the hashtag with the occasional person giving the occasional tweet and I was giving a running commentary (all very polite!) while writing a blog post and listening closely. ?I did accidently berate the deputy editor of IFJ for only tweeting once and then discovered he was in the office in Dublin working on the next edition! ?By the way, if you do want to check out the tweets, the hashtag was #agwomen. 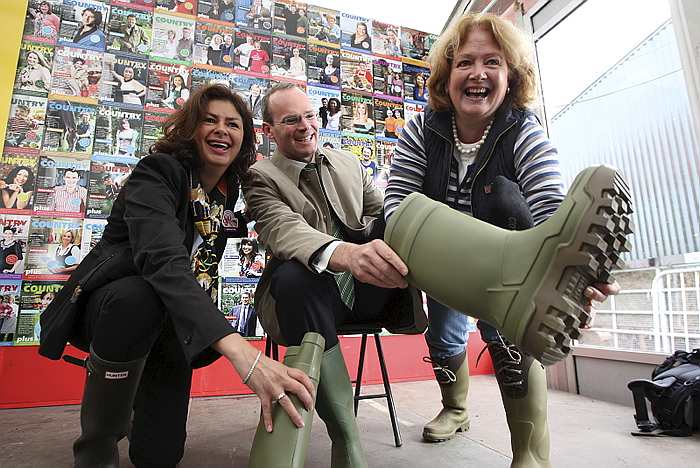 So, what was the conference like? ?Well, I didn’t think it was that inspirational or motivational until Caroline Casey spoke at about 4.30 – a very inspiring and impressive lady who also spoke very well. ?It was the usual stuff about how farming is so competitive and how the population is expanding and we have to produce the food to feed them all and how cash flows and succession planning are necessary etc. ?There was nothing ‘different’ to what we could read in the Farmers Journal I felt. ?Declan McEvoy used to be our accountant when he was in Carlow and he was a man of very few words then, terrible at small talk but I liked him as he was direct and answered a question in very few words (I hate people who go all around the world when answering a question). ?I did lose concentration during his talk (I like words not numbers) but what I did listen to was good. His closing words though weren’t very cheering – we will all be paying more taxes!

Good Food Ireland did a good talk and she extolled the virtues of Irish food and how important it is to continue setting Ireland up as a food destination for tourists and to encourage people abroad to buy Irish produce, however there wasn’t any suggestions about how the women sitting there could contribute in their own small but important ways. ?Personally I think more farmers and farmerettes should be blogging – whether to ‘meet’ other people, prevent isolation, start writing which could lead to other things, or to promote their fish produce, their beef, their lamb, their milk etc to show consumers the natural green Irish grass and fresh air that our animals enjoy as they thrive. ?Let consumers read about good farming practice from the people who are doing it. I ended up getting into a debate with Bord Bia and the Farmers Journal on the topic (via tweets!) and enjoyed that.

Talking to a 19 year old full time farmer during lunch, she was telling me about how joining a good Macra club has transformed her social life but for those who are too old for Macra or too shy to go along, I think blogging would help people to socialise too, online first and then offline. ?I’ll won’t go into all the reasons now but I also think farming blogs will make lovely historical diaries for future generations to read as well as important historical documents too.

The Willoughby brothers (6 of them) seranded the 600 women there before lunch for half an hour and then sold their CDs during the lunch break. Simon Coveney spoke after lunch and yes, while he is a good speaker, there was nothing new or particularly inspiring during his speech either.

I actually felt strange talking about farming over a conference lunch rather than social media! ?All in all, it was a good day but it wasn’t as inspiring or as motivational as I had hoped. ?I would have preferred talks that were more contentious even, to evoke debate or something that would leave every woman there with an action plan in her mind that didn’t just include the norm of cashflows and succession planning.

8 thoughts on “Women in Agriculture Conference”