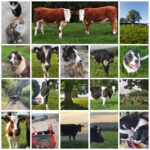 Can you believe that it is almost October? I can’t. We had lovely summery weather until a week ago and suddenly, the cold temperatures of winter are here. The bonus, of course, is that I am lighting the fire every evening and enjoying sitting in front of it with a cuppa and either a good book or my crochet. This is the first winter in four years that we haven’t had a building project going on and while we might have slightly itchy fingers, it feels good to be project-less for a little while.

It’s been a busy year on the farm – the new milking parlour was a huge project. We had a hectic few months before Covid 19 and self isolation hit us in March, the yard full of various workmen on a daily basis from the end of November until into March as we took out the old 10 unit parlour, extended it into the old dairy, moved the bulk tank and everything else needed in the dairy across the yard to store them in other sheds, and installed a new 18 unit Pearsons parlour. We also put in a new collecting yard, new exit, drafting gates and re-concreted parts of the yard too. Did we go over budget? Of course. Was it stressful? No in that we had a good team but it did make life busy. But it’s all done now and it is making life much easier. 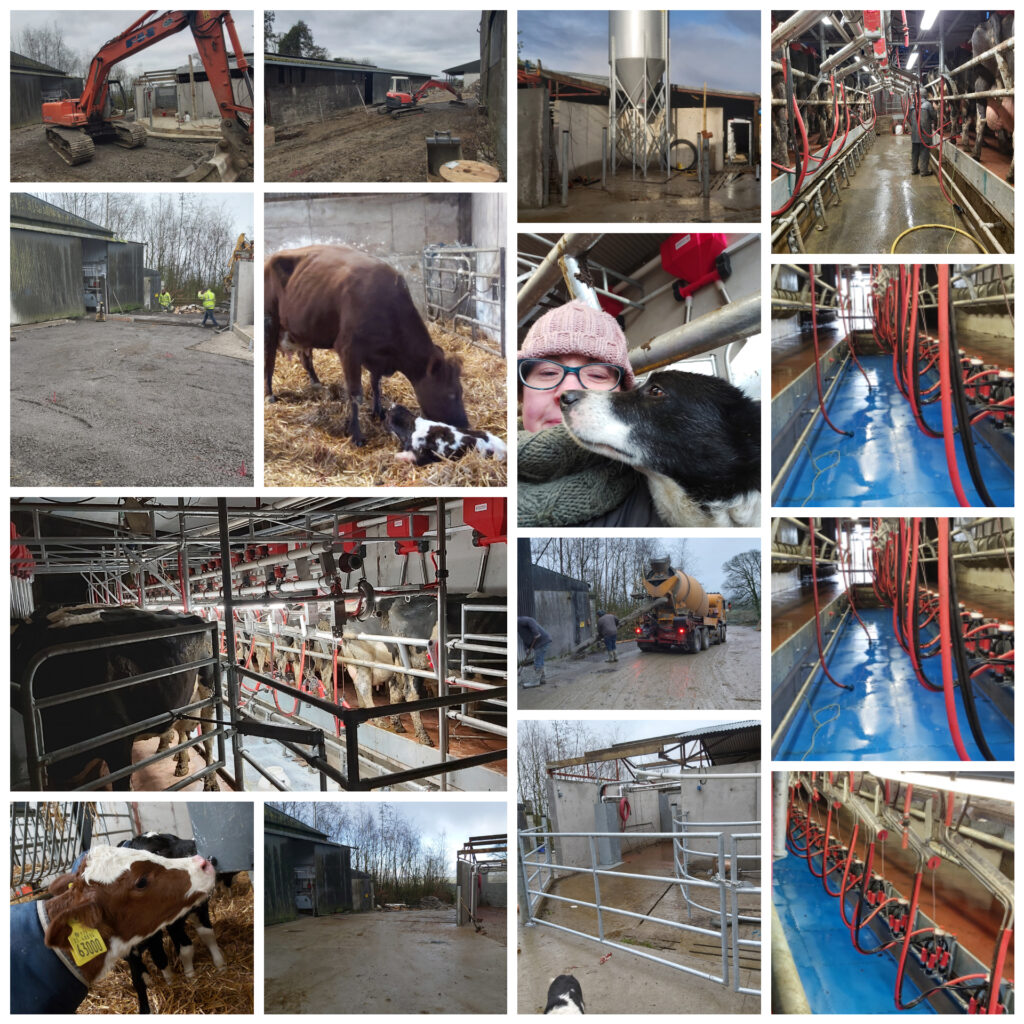 Were there many hiccups? Not many at all. The concrete guys were great, they have built two other sheds for us in the past. They are relaxed but put in the hours to get things done. They also run a dairy farm so are used to cow behaviour. As you’d expect, things changed as the build was happening as Brian and Seamus tried to work out the best way to do things. Pearsons installed the parlour dead on time. A couple of cows calved early but we only had to use the mobile milker for a couple of days. Having heard nightmare stories of farmers having to milk tens of cows and heifers in cattle crushes with mobile milkers, we were adamant that it couldn’t happen. Neither of us had the energy.

Getting Stuck in the Drafting Gate!

I do give the drafting gate a wide berth now though, ensuring that when I’m scraping through it, I only walk through it from the far side. Walking through it once with the scraper, it shut and wouldn’t open again, securing me within it. My head was out one side, my bum and legs the other and I was caught by the ribs. Brian came running when he heard me shouting. It hurt so there were tears starting to form as well. It took him a couple of minutes to work out how to open it, waving at the sensor didn’t seem to work. He was just starting to wonder if he’d have to ring Pearsons to tell him I was stuck when it opened.

Calving went well. We had a few calves that were born with something wrong e.g. one had intestinal atresia (couldn’t poo) and had to be put down. One had water belly (a huge swelling of fluid within its body) and died during birth. Another calf had deformed legs and couldn’t walk and I had to call the vet out to put her down too. We sold 28 Friesian bull calves through the new ICBF DNA bull calf system, whereby all calves were tagged with DNA tags (which were sent off to verify parentage) and the calves were collected and brought to Kilkenny mart to be sold. 2 bull calves were sold to Dovea AI station but we won’t hear until the end of the year if they are going to make it into the catalogue (and thereby earn us more money). It makes such a difference now to have plenty of housing and all of the calves within two sheds compared to running around between four sheds and a few hutches, all placed at opposite ends of the yard. I probably won’t lose as much weight during calving but I can live with that.

What has it been like farming through Covid? To be honest, initially it was just like an extended calving season in that our social life didn’t change from February into March and so on into May and June. Yes, we had to be careful and give any callers such as the milk collectors a wide berth. But after having the yard full of various people for three months, it was so nice to have the place to ourselves again and know that there weren’t going to be any callers. Yes, we tend to like our own space. I’m aware that we are extremely lucky though, we have plenty of space to go for walks. Ambling behind the cows on Garrendenny Lane is incredibly relaxing and provides a great sense of calm. It was easy to self-isolate and to be honest, I am going out very little even now. I’ve met two friends for lunch in the last month and that’s been my social life since March. 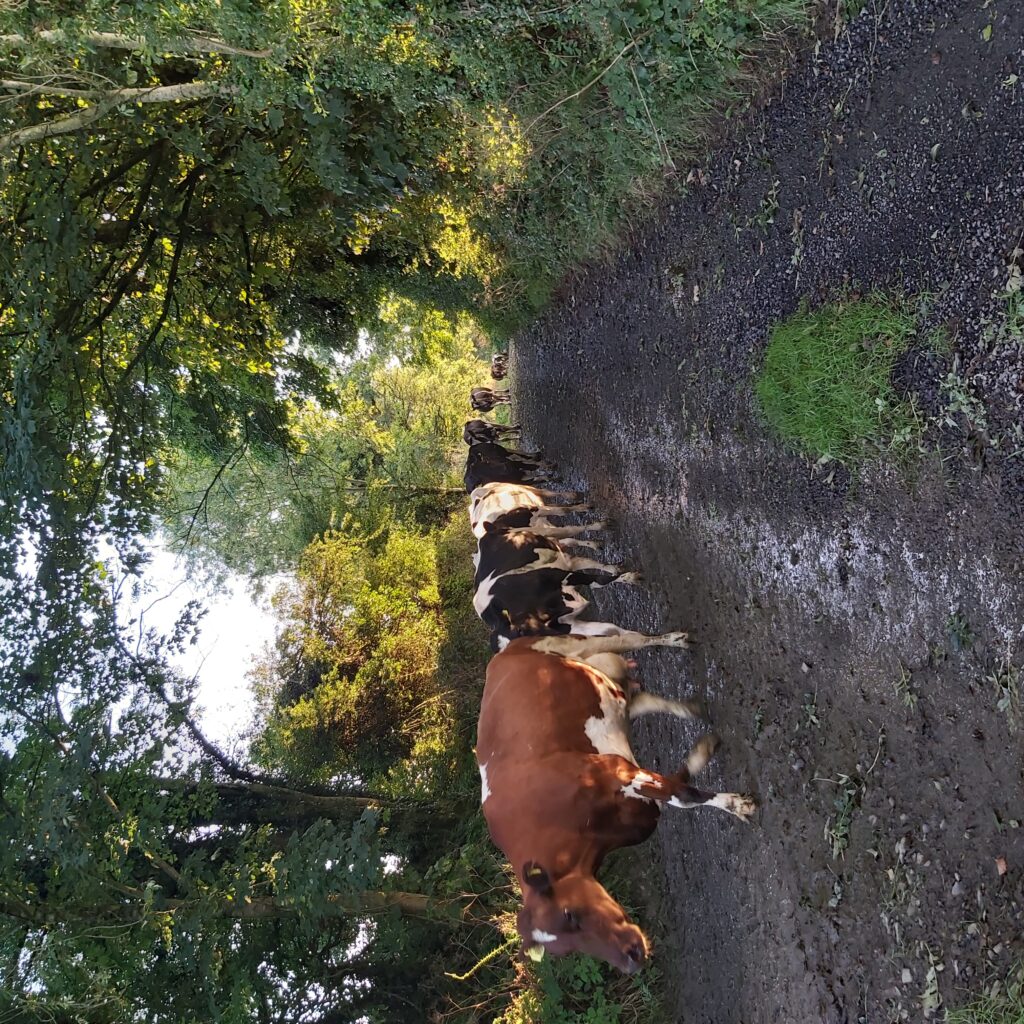 Conscious that the teenagers will be off to university in 2021 and 2022, it was lovely to have that extended time with them, between them helping out, having a laugh, having meals together, not having to rush to collect them or drop them off. I think we will be looking back on it as a very precious time together in spite of all the rigours of Covid, Brexit and of course, the upcoming US election. We’re certainly living through interesting times.

I did start to struggle with the sameness of everything though and yearned to get away for a short while. The one problem with farming is that it’s impossible to take a rest, to take a break unless you physically leave the farm. Otherwise, there is always something to be done or even if you’re not doing it, it’s not relaxing to feel you should be. Kate and I went to Donegal and Sligo for a few days once lockdown was lifted, back in early July. While the castles we wanted to see were closed, we walked around many stone circles and monuments, visited gardens and beaches, and did a lot of walking. 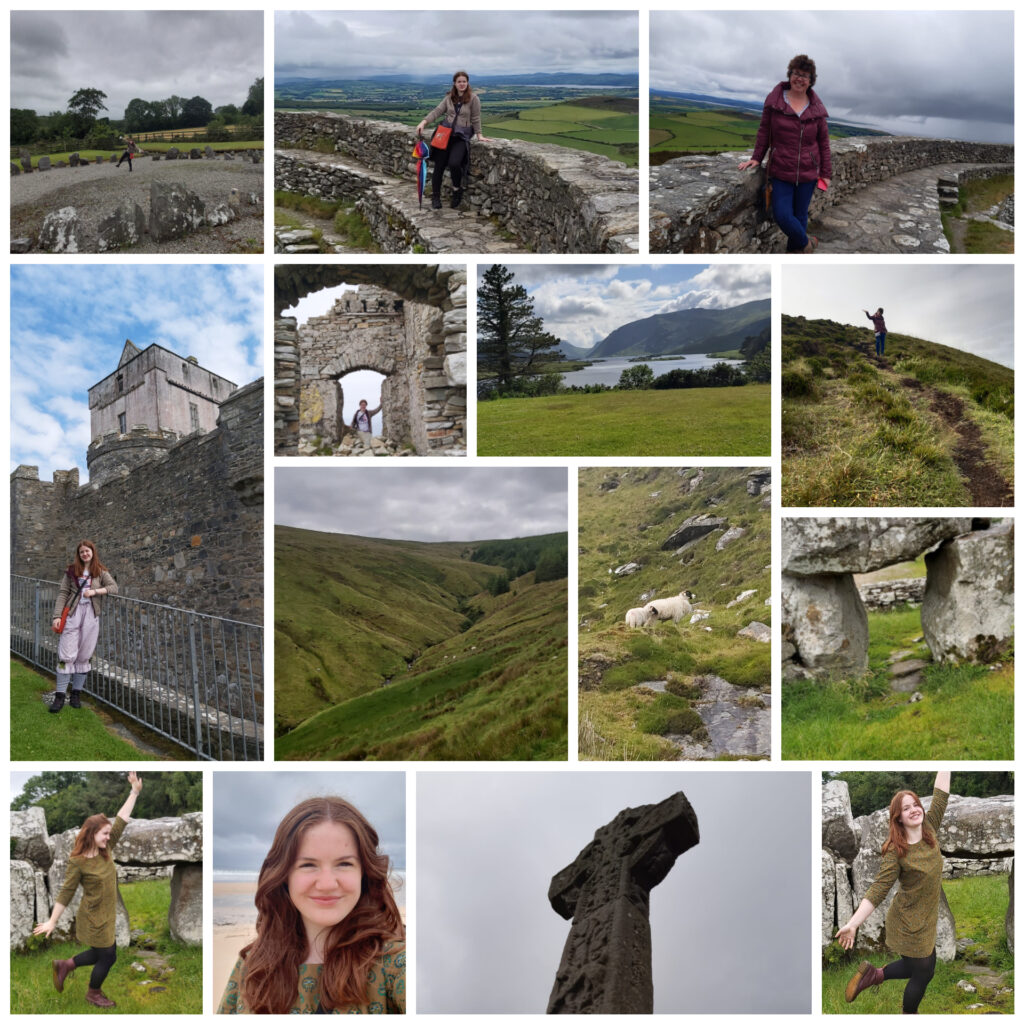 Holidaying in Donegal and Sligo

Brian and I got away for two one-night breaks leaving the teens to hold the fort, milk the cows and look after all the animals. The things I really miss are trips to concerts, plays and the cinema. The last ‘cultural’ outing was back in early February. Kate and I had booked tickets to see Riverdance on 8th February, me thinking that the calving wouldn’t be that busy by then but with many cows calving early, it was busy and we headed off relieved that we had booked tickets for the afternoon show and I wouldn’t have to drive late at night. As it was, I slept through the entire first half. I’ve no idea how I slept through the noise. Kate gave up trying to nudge me awake. Goodness knows what the person beside me thought but I thoroughly enjoyed the second half!

The children are back in school four weeks now. They did find wearing masks to be tiring and were exhausted by the end of each week but getting used to it now. As they are in 5th and 6th year, the amount of homework has increased too of course. Will passed his driving licence in February and bought his own car so they are driving to school now.

And what is happening with my writing? I’d love to say I have a novel ready to go but that would be far from the truth. I’m not sure whether it was the effect of Covid or just being busy on the farm, but my creativity and concentration took nose dives again. However, I’ve been doing lots of planning and one is well on the way. I have planned four books of a series, and if they go well, they may be another three or four to finish the series. Time will tell but I’d say it will be another year before the first is released.

A couple of years ago, I wrote a blog post debating whether self-publishing or traditional publishing was best. Both have advantages and disadvantages and it mostly comes down to whether the individual writer wants to be involved in the business side of selling books or not. I’ve decided to self-publish my next books. I get so much more of a kick from promoting the books and seeing surges in sales (or not) than receiving six monthly statements.

My ‘house builders’ arrived last December and while it wasn’t easy for a few days having builders inside as well as in the yard, they fitted oak floorboards and kitchen cupboards in the kitchen. They didn’t have time to put in the new skirting and I said they could wait till they returned after Xmas to do another room. I’m still waiting! Many years ago, we put a new roof on the attached garage and changed the garage door and windows to french doors and a large window but that was as far as we got. My plan is to make it a library and writing room, a space that is separate from the rest of the house, with a large desk, a wood burning stove, my Chesterfield sofa and tons of bookcases filled with all my books. For years, my books have been stacked on shelves two and three deep. I rarely give books away, they are like old friends and yes, I’m one of those people who buys more books that she will ever read. So yes, hopefully the builders will return soon and I’ll get it finished at long last. 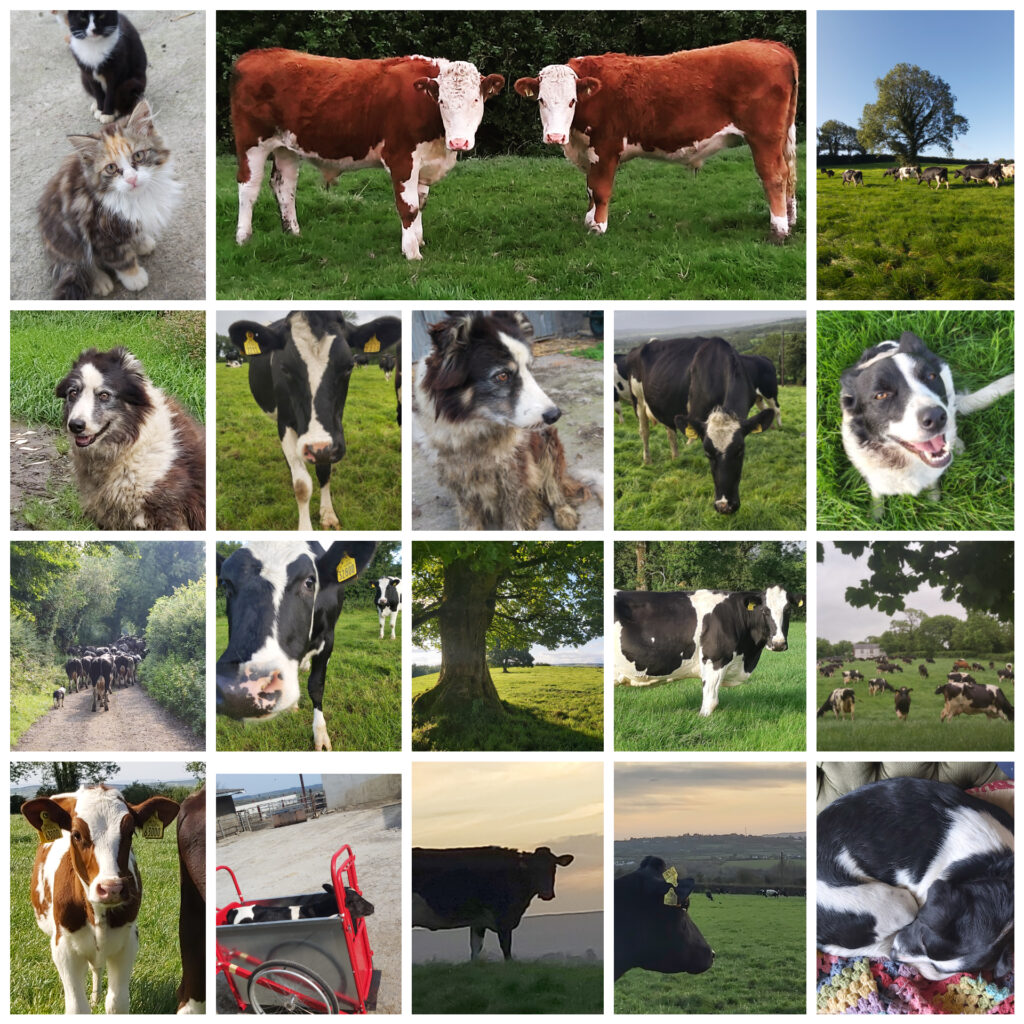 Farm animals – some of my favourites

2020 has certainly been a strange year. In ways, it feels like we have been caught in a time warp. It’s hard to believe that calving is only a few months away and with all 140 cows pregnant bar six (as far as we know) and all 32 heifers pregnant, it will be another busy season. Before that though, we will enjoy any sunny autumnal days that come along, hopefully I’ll get a library built and decorated, and make progress with my writing. Despite the drought in the early summer, we have plenty of fodder harvested and stored which is a huge relief. All in all, barring the things that I can’t do anything about (Brexit and the US election come to mind), it is shaping up to be a good end of year as long as Covid numbers reduce and the country can get back to some normality.

And there ends my summary of news. Believe it or not, I started this post back in August but my excuse is that my laptop’s hard drive died and took a month to be replaced!

Wishing you and yours good health.