For someone who loves blogging, I’m very aware that I’ve been so busy lately that I haven’t been around here much! I’ve had this post in my head for some time that I must write down what I do all day (in an attempt too to eliminate any procrastination sneaking in there) so thought I’d share it with you. 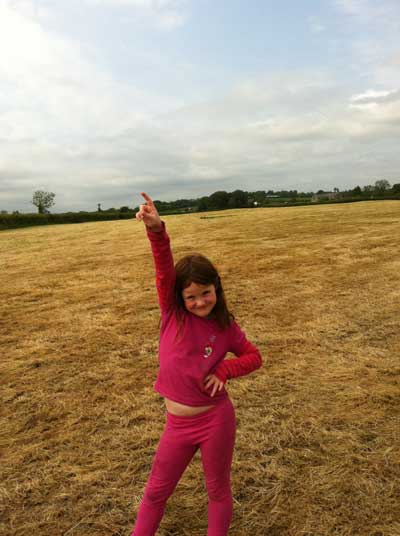 7:30 – I never even hear Brian getting up around 6am and I often plan to get up earlier and get a significant amount of email/twitter stuff out of the way early in the morning but I rarely manage to get out of bed before 7. I’m usually always up by 7:30 but it might be 7:28! I totter downstairs and switch on the laptop and make a start on the kids lunches, calling them around 7:50. By 8:10 they’re dressed, breakfasted and doing things like brushing hair and teeth or playing while I’m having a shower.

8:45 Walk kids to the bus at the end of our avenue. Our bus driver is lovely but can arrive any time between 8:50-9 lately so sometimes we end up running and sometimes we’re waiting a while.

9:45-3 ?If I’ve a client or a training session booked, then it is a quick shower (if not showered already) and off in the car to it. ?If I’m working at home, then it’s a case of emails/doing orders/blogging/ghost blogging/preparing for courses/uploading products/preparing dinner etc with a 20 min v late breakfast with Brian around 11am. (He doesn’t have breakfast before he milks, preferring to milk and do the calves/get heifers in for AI/put cows out which often involves fencing off an area of the field/etc)

3:30-5:30 ?We have dinner when the kids come home from school and then they play and I do homework with them. W gets on with his own homework, only needing help for clarification but yet he’ll tell me if he feels he is finding it hard to understand anything in school and we’ll do a bit of extra work on that. Homework with K can take anything between 20 min to an hour, she seems to get a bit overwhelmed by it at times and is sometimes torn between wanting to do her best or throw it there! We do power hugs occasionally!!

5:30-8:30 ?The kids have activities some evenings so I either drive them there and do a grocery shop while I wait or I share lifts with another parent depending on which activity it is. If they don’t have an activity, then I’ll divide the time between feeding calves (Feb-May), doing some work on the laptop, getting tea, running the hoover around and reading to the kids. Bed is generally around 8:30 for them now but all too often, seems to be nearing 9!

9-12 ?I admit I’m a night owl and often think that is when I have the best concentration. A few years ago when I did Not Enough Hours, the kids were younger and were going to bed earlier, so I’d have them down by 7:30 and then I’d work till 9:30 and have the rest of the evening to myself. ?I’ve got into bad habits again of working till 11:30 partly as Brian is so busy he’s rarely in before 10:30, partly because I’m so busy and partly as the kids are doing more activities, I’m doing more running around. I rarely go to bed before 12 which explains why I can’t get up before 7. Brian manages on 6 hours sleep, I can’t but then he can’t drive for any length without feeling sleepy! I had to drive him and Will to Dublin yesterday for the Formula One Bavaria City racing as otherwise he would have fallen asleep and the trains weren’t running at the right times, K and I went to Bloom but it was cold and very damp. 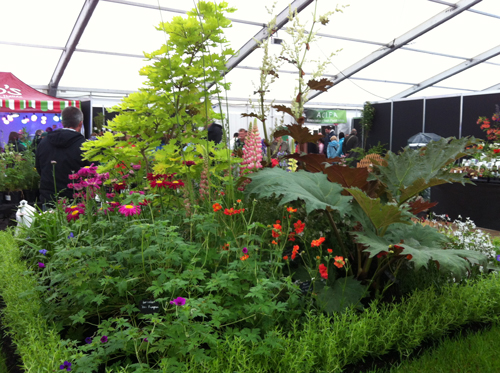 This is the flower bed I would love for a damp part of the garden but as it is, the herbaceous borders are very neglected, let alone starting another one!

I’m exhausted this weekend, falling asleep on the sofa around 10pm the last 2 evenings and sleeping on till 9am. ?I was working on a booklet for our church’s 200th anniversary later this month and it is now at the printer’s, all 18000 words of it. I had lots of help from my retired school principal and she gave me lots of research, couldn’t have done it without her but there was a lot of midnight oil being burnt!

We went (the kids and I) to Mona Wise’s book launch in Galway on Thursday night and stayed the night. The kids were so excited that they stayed up until 2am! ?It was a lovely party and launch and if you are interested in getting a copy of M?na’s recipe book cum autobiograpy, it can be purchased online. You can see some photos over on Colette’s blog (I got lost and was late – missed all the speeches and lots had left by the time I got there!). I actually gave Mona the Blog awards strut to sign instead of the book so ended up taking a photo of her with both! 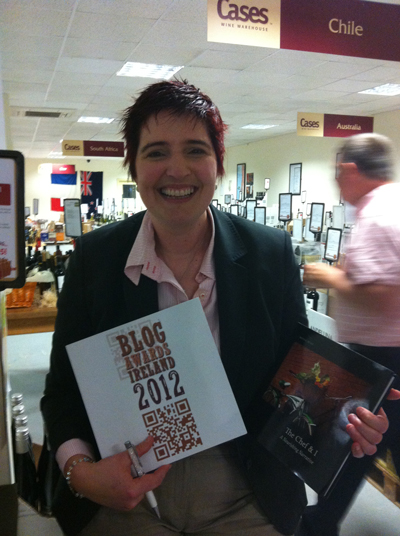 And I couldn’t resist taking a photo of Kate with the bike that is featured on the front cover of ‘The Chef and I’ – with the BAI strut in the bicycle basket of course! 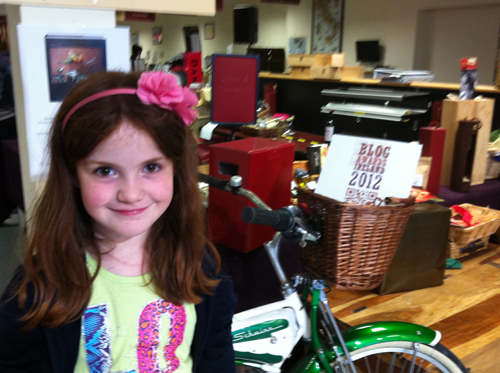 There’s a lot of work going into Blog Awards Ireland too – we were busy beavering away last week getting the site finished and ready for nominations which opened on Friday not to mention talking to potential sponsors. That reminds me, I need to finish off the press release!

We should have cut our silage early last week (hindsight is great!) but as the forecast gave rain for Wednesday and then fine again, it was planned to cut on Friday/Saturday but of course, the weather forecast was wrong and we’d heavy rain for the last few days. ?Paddocks that were going to be taken out for wraps now need to be cut so they are back in circulation again for cows so we’re hoping to cut 30-40 acres tonight and leave the rest till next week or whenever it dries, it is called ‘hedging your bets and hopefully we’ll be seeing one of these beavering around the fields in a few hours. 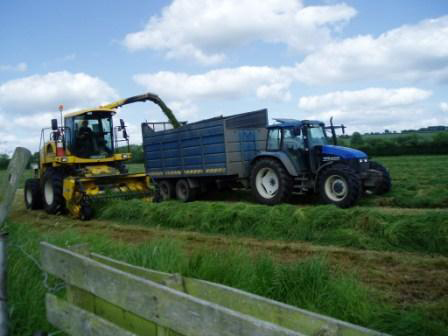 And another picture from last year – Will loves going on the tractor with the mowers and Kate and I brought over the tea to have in the field. 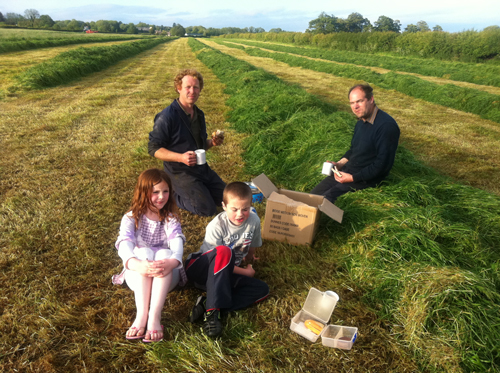