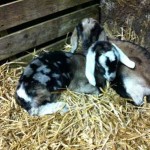 One of the things about farm living is that children become accustomed to births and deaths from a young age. I always told the children that any animals that died went to heaven because I felt it would be comforting to them and also should a grandparent die, they would be used to the idea but I remember telling Kate aged about 3 that a calf had died. ‘Where has he gone?’ she asked and I replied ‘Up to heaven’. ?’No, it’s not’, said Will aged 5 coming running out of a shed ‘it’s still in the shed!’ ?I obviously still had to explain the bit about the soul going and leaving the body behind! 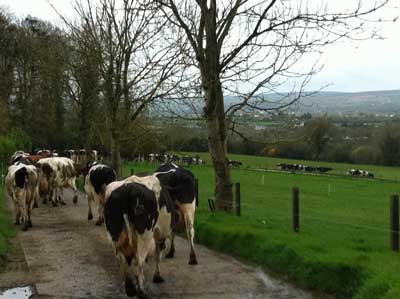 I was 8 when I started bringing in the cows for milking with my dad. I remember bringing them in from Lynups hill which had a ‘long way’ round and a ‘short way’ round and my dad becoming irritated as the cows all decided to come in the long way while a lone sensible lame old cow started off along the short way. ‘Follow her home’ he told me. ‘But I don’t know the way’ (came my reply and my sense of direction hasn’t improved much since!). I was told the cow knew the way so I dutifully followed her quite impressed that a cow that was probably the same age as me knew so much more than I did.

The following year when I was 9 was the first year I brought the cows in on my own. ?My favourite cow was one I named the ‘Leader’ as she was always the first to start leading the others out of the field and was almost always first into the milking parlour. ?The following spring she had a heifer calf whom I named Polly but unfortunately the Leader got milk fever which developed into something much worse and couldn’t be cured. We lifted her out to a field but there was nothing could be done for her. ?I can still remember coming home from school and the babysitter was there as my mum was away. My dad came in to tell me the news that the Leader had died and I was inconsolable. ?I was given her heifer calf to make me feel better and I hoped she would also become a leader but she was always one of the last into the parlour! 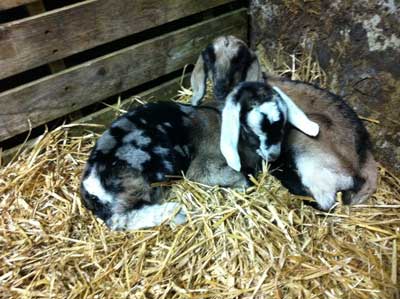 Daisy (Becky’s daughter) and Snickers (Megan’s son and adopted by Becky!) snuggle up to sleep together.

It is still upsetting when an animal dies from an illness particularly if they have battled an illness and you think they are almost better or if they are young. ?I know this might seem strange when we send animals off to the factory for meat at age 2 for bulls and our dairy cows are either brought into the herd or sold to other dairy herds but cows will be culled too and sent to the factory. However, there is a big difference between sending them off when they have lived a good couple of years, being outside when weather permits it to dying prematurely. It’s a little like how I regard the death of humans really, I don’t feel too much sorrow when someone dies who is in their 80s or 90s if they have had a good life and their standard of life has deteriorated due to ill health. ?I think farming teaches all of us the natural cycle of life but it doesn’t stop us becoming sad when that natural cycles is altered and an animal dies or has to be put down prematurely.

Does it help children to come to death with bereavements? I’m not sure if it would help with family deaths but I think it helps them to learn about the natural cycle of life.