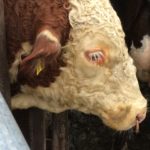 About 14 years ago, I was teaching Communication Studies at a third level college. I brought a t-shirt into one seminar, asking students  to discuss how they would regard a person wearing it as it bore the slogan “High Fertility, No Bull”. I didn’t show them the front which showed the logo of the Artificial Insemination company but as it happened, I don’t think they would have recognised the name anyway as none came from farms. Their interpretations were varied and interesting, many focusing on a person’s sexuality, and came to my mind recently as we’ve had a situation where we’ve had “Low Fertility, All Bull”.

If you’re a regular reader, you may remember when Flash, the Hereford bull, arrived at the farm. He took a few days to settle in and get used to his new comrades of black and white Friesian cows. As we were inseminating most of the cows with artificial insemination during the first six weeks of breeding, he was visited by an occasional cow for mating during his first three weeks. Cows go on heat every 21 days and he served 16 cows in his first three weeks. Cows are more likely to go in calf to a bull than to A.I and as our herd fertility is fairly good, we were confident that the majority of the cows he served were pregnant. Happy days.

However, after 3 weeks, some of the cows repeating had been served by Flash and after 4 days, the alarm signals were really ringing. We contacted the seller and arranged for Flash to be fertility tested again. We usually use a couple of our own stock bulls to clean up after the 6 weeks of AI but this year, we were fattening 19 bulls and they were shortly going to the factory. According to Teagasc, every delay on 3 weeks on a cow calving (the causes perhaps being a missed heat, infertility or an early miscarriage) costs €250 based on loss of milk and thrive of the calf. Therefore, the important thing was ensuring that these cows became pregnant. We decided to pull out 4 of the Friesian bulls based on their EBI, temperament and whether or not they were too heavy now and get them fertility tested too. Eating meal ad-lib can affect their fertility too apparently. In the meantime, we used Angus AI on cows that we would have put to the Hereford bull as well as letting him serve them although he had to have two days of complete “inaction” before the fertility test. It looked like poor Flash had about as much success as this beautiful bull sculpture in the Botanic Gardens would have. 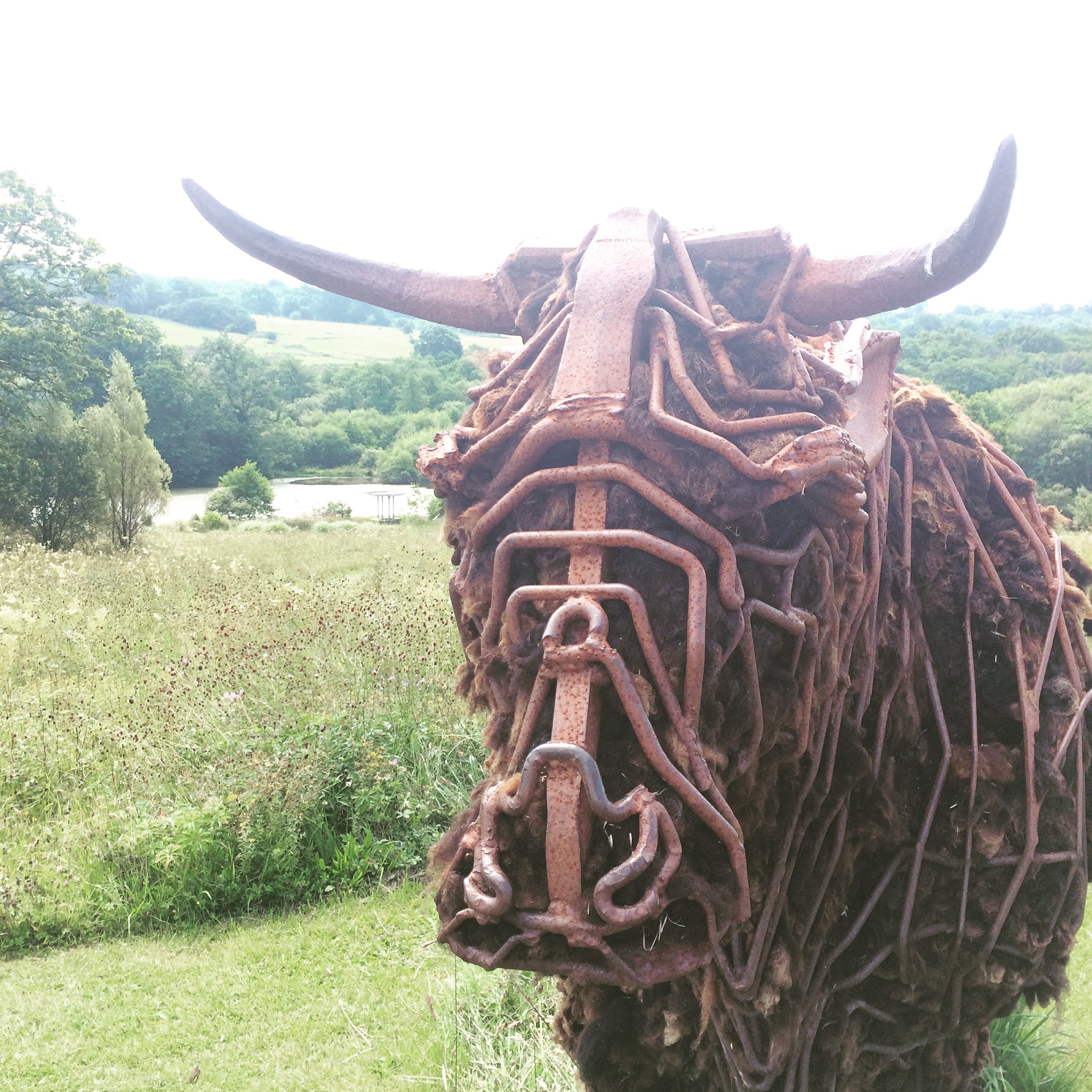 Then came D-Day. Flash was put into the cattle crush and semen collected. Apparently the sample was fine. “It can’t be” we said in unison “He hasn’t got a cow pregnant yet.” It was decided to take a second sample and then the problem was revealed. There was hardly anything there. Even though he was only serving one cow a day, she was getting very few sperm if, for example, he spilled any before he inseminated her.  There was nothing left in a second ejaculation. It wasn’t the seller’s fault, he’d got him fertility tested and sold him in good faith. It was just one of those things. But there was no point in keeping him. The seller exchanged him for another bull. 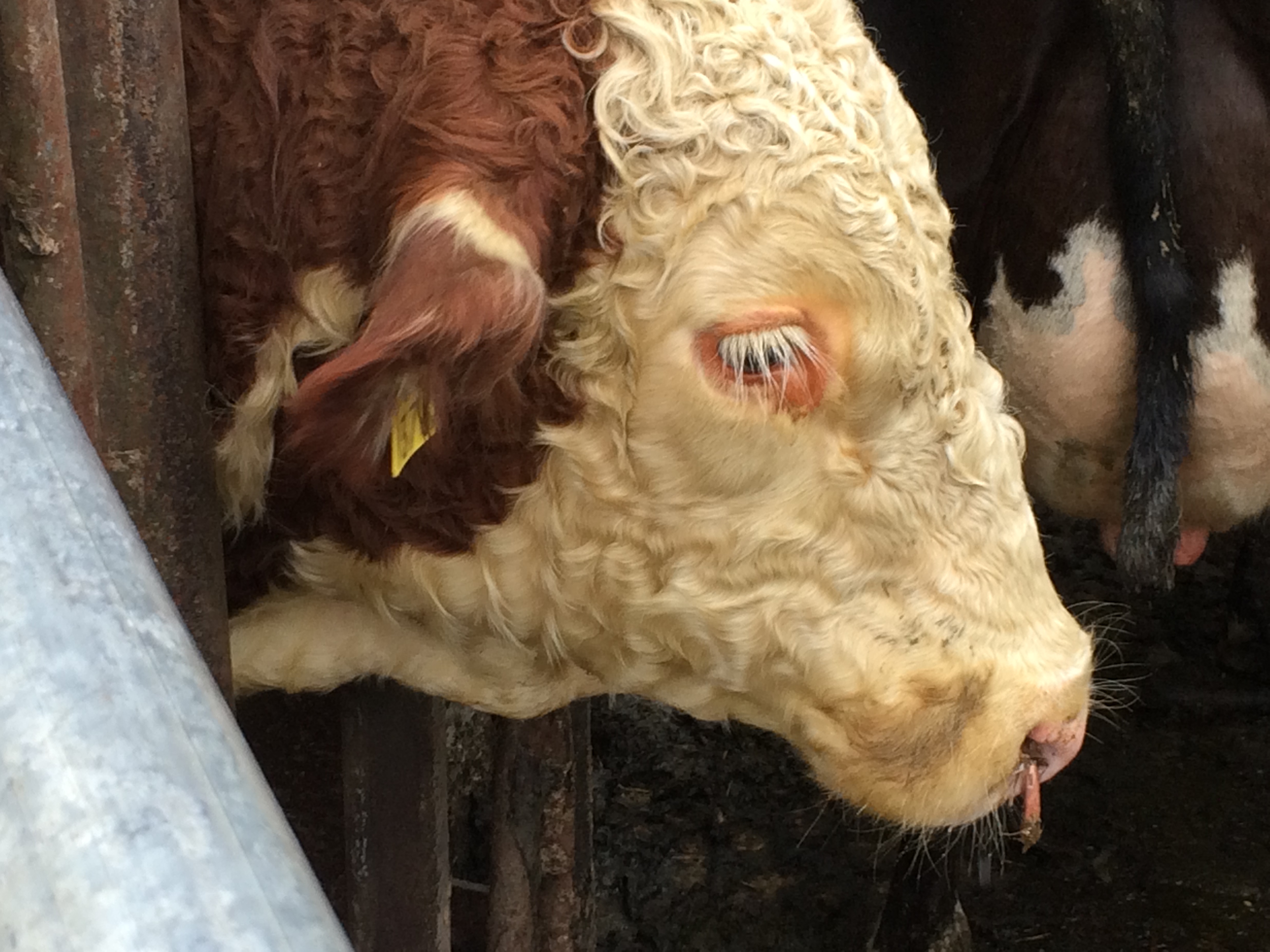 Red settled in fairly quickly and seemed most enthusiastic so we breathed a sigh of relief. We did get him tested – yes, tested two samples – and all seemed fine. However, his ardour seemed to cool somewhat. He wasn’t being overworked in the least but didn’t seem keen to work on demand, he seemed to want time to work up to having sex, whereas either of the two Friesian bulls were perfectly happy to get down to it within minutes. We normally keep the bulls indoors, letting the cows into the bulls as appropriate and using a teaser bull out with the herd. Almost in desperation when he didn’t respond to cows two mornings in a row, we let him out with the cows for a couple of days. On the first day, they were in a field adjoining the yard and as Brian was spreading slurry, he could keep an eye on him. Red seemed to lounge around all day, even though there was plenty of action from one cow. Eventually, at 2pm, he eventually responded to her and obliged. It seems he has to be presented with the perfect timing. If you’ve noticed that Hereford bulls tend to be a bit lazy, do let me know!

It’s been getting too late to risk waiting three weeks to see if any of his ladies are pregnant or not so since the AI finished up a few weeks ago, we’ve been letting any cows on heat in with two bulls, (not together by the way, in to one pen first and then the other). Next spring will be interesting – how many of the later calves will be Hereford and how many will be Friesian? Time will tell.

I think Teagasc need to focus on the positive rather than the negative. Rather than “losing €250” every 3 weeks a pregnancy doesn’t happen, we should describe it as gaining €250 for each one that gets pregnant first time around. Not that the money is actually there in front of us as paper money anyway but the positivity would help a lot more than the negativity! It was annoying, but these things happen. A first time for us and hopefully the last!

Life is never boring on a farm that’s for sure! Certainly no time to rest on any laurels.

One thought on “Low Fertility, All Bull”