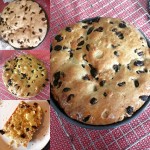 The barm brack is a fruit loaf, delicious spread with butter and if it goes a little stale, it’s even more delicious if lightly toasted and then swims in melted butter (a bit like a toasted teacake). Hey, it’s coming into the winter and we can cover up with lots of layers so a little melted butter won’t do any harm!

There’s always a ring in the modern shop-bought barm brack and the tradition goes that whoever finds the ring, will be the next to get married. I’d imagine it had great significance 50 -80 years ago when getting married wasn’t just a case of falling in love but something that happened when a man could afford to keep a family and a woman could afford a dowry to ‘buy’ her place in his family. Although the number of single people in Ireland was significant, marriage was still seen as something to aspire to, where females became women and had their own house to call their own.

In 1911, 25% of Irish women aged 45-57 were unmarried, and in 1936, 44% of women aged 34 were single (Irish Press 5/7 1947) . People married for land and money, not love. A marriage was often a financial transaction between two families where the bride brought sufficient money or products to compensate for the cost of her future keep and to grant her status in her new home. V. Morton, an English writer travelling around Ireland in the 1930s, was shocked at the lack of romance and the emphasis on matrimony as a business deal.

She would never know romance as other women know it. Men do not marry for love in agricultural tribes. They marry land or cows or sheep or the potato-patch that runs next to theirs, whichever seems to them the best dowry. There is a proverb in rural Ireland that it is unlucky to marry for love. Scots have a proverb: “As loveless as an Irishman.”(HV Morton, In Search of Ireland, Metheun 1930, p187)

Back then, of course, barm brack was homemade and was probably gigantic so finding a ring in amongst all those slices wasn’t necessarily easy either. There were other things in there too – a thimble (which signified staying single forever!), a coin which indicated riches would be heading your way and a rag which signified poverty.

When we were kids, our workman was single and we went through a stage of trying to marry him off, which basically entailed identifying suitable women in the parish and teasing him about them. As he had his tea at a different time to us, just before he headed home to his own farm, we used to get Mum to cut slices of brack until we found the slice with the ring on it and put it on the table for his tea.

Kate and I found a recipe for barm brack in a 1950s magazine cutting so we experimented with it as some of the instructions were a little vague. I mean – is a hot oven 180 / 200 or 220 degrees Celsius? We discovered it is 220!

Though the barmbrack is a traditional Irish and Scottish Hallowe’en cake, very few city folk now attempt to make it themselves. The following recipe is simple and reliable and makes a good-sized brack. 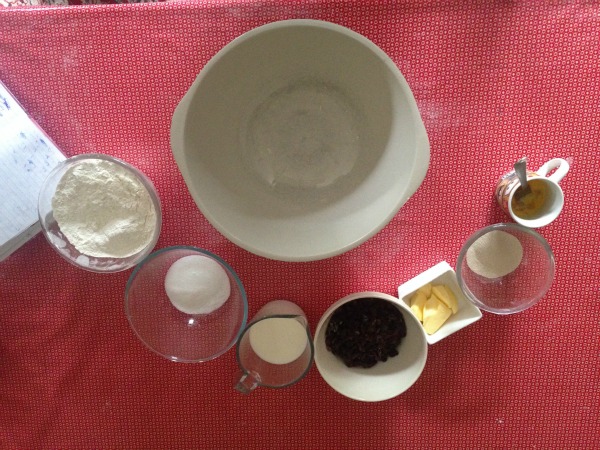 Sieve the flour and salt into a bowl which has been warmed but has not been allowed to get hot.

Rub in the butter. Add the sugar.

Mix the yeast with 2 tablespoons of the tepid milk. Pour it into the centre of the flour, together with the beaten egg and sufficient of the tepid milk to make a stiff batter. (I usually have a tablespoon of the milk left from the amount in the ingredients, but you may have to use all of it.)

Add the fruit and beat the mixture for ten minutes with a wooden spoon until it is smooth and elastic. 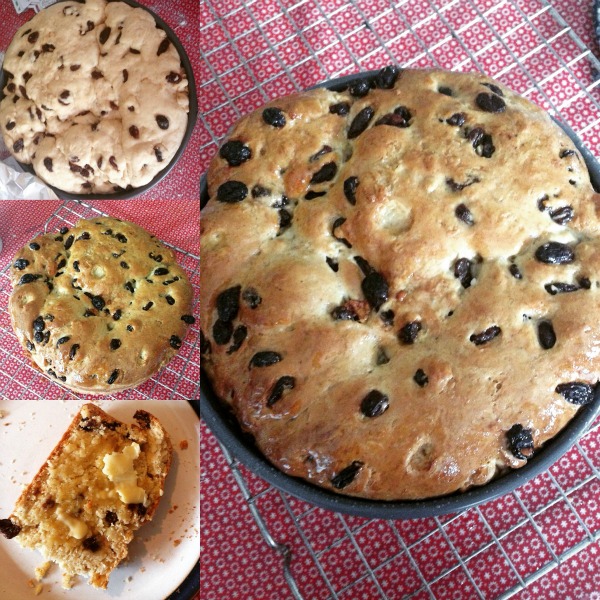 Turn the mixture into a warm, greased tin, cover with a cloth and stand in a warm place to rise to double the size. [We used an 8-inch/20-cm tin with high sides. Make sure to warm it before adding the mixture – it makes a huge difference.] This will take about an hour.

Meanwhile, make a syrup to glaze the brack, as follows: Put three teaspoons of sugar and three dessertspoons of water into a small saucepan [or heat in the microwave]. Heat slowly until the sugar is melted. At the end of the cooking time above, paint the syrup on the brack and pop it back into the oven for a couple of minutes to dry.

Cool on a wire rack.

Believe me, there’s plenty of eating in this barm brack. It’s very different to the shop bought ones, much denser and much more filling! Let me know what you think if you get around to baking it.

The recipe for barm brack, together with other traditional baking recipes are included in my book How To Be A Perfect Farm Wife and it’s also available as an ebook now too. It also has Kate’s award-winning scone recipe and my biscuit cake recipe.