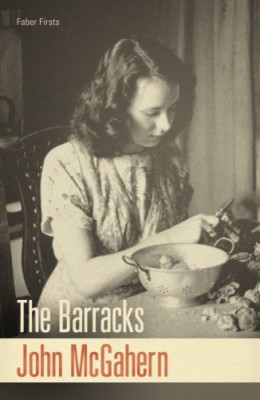 The Dark and Amongst Women have been on my list to reread for a while as it’s probably close to twenty years since I read them. I picked up a copy of The Barracks recently, John McGahern’s first novel and got around to reading it this week.

Mid century rural Ireland. Reegan is a sergeant, living in a small town barracks, fed up of his superiors, hoping to resign and buy a small farm, widowed with three children. He married Elizabeth when she returned to visit her family from her role as a nurse in post-war London. Broken hearted and disillusioned after her lover left her (I wondered if he, a tormented doctor, was gay?), she felt her only choices were returning to London or staying to look after her mother and keep house for her brother on their farm in the back of beyonds so when Reegan showed interest in her, she seemed to see it as a good option – possible happiness, a home of her own, the possibility of having children.

Mostly told from Elizabeth’s point of view, McGahern uses such powerful description, this is a beautiful book. Describing ordinary life, ordinary thoughts, and the ordinary worries of people in rural small town Ireland, it offers a window into the soul of that barracks. It describes the patriarchal society so well, Elizabeth and the children almost on edge when Reegan walked in the door wondering what mood he was in. The fact that he is referred to as Reegan (rather than his first name) throughout the book shows his distance from others but yet the fact that he can’t seem to understand Elizabeth or even delve as deep into his own thoughts.

Mrs Reegan darned an old woollen sock as the February night came on, her head bent, catching the threads on the needle by the light of the fire, the daylight gone without her noticing. A boy of twelve and two dark-haired girls were close about her at the fire. They?d grown uneasy, in the way children can indoors in the failing light. The bright golds and scarlets of the religious pictures on the walls had faded, their glass glittered now in the sudden flashes of firelight, and as it deepened the dusk turned reddish from the Sacred Heart lamp that burned before the small wickerwork crib of Bethlehem on the mantelpiece. Only the cups and saucers laid ready on the table for their father?s tea were white and brilliant. The wind and rain rattling at the window-panes seemed to grow part of the spell of silence and increasing darkness, the spell of the long darning-needle flashing in the woman?s hand, and it was with a visible strain that the boy managed at last to break their fear of the coming night.

?Is it time to light the lamp yet, Elizabeth?? he asked.

The habit of religion is revealed, as they kneeled every night to say the Rosary. Elizabeth seems to find comfort in the prayers but finds it hard to concentrate, saying the wrong number of prayers. She doesn’t like the priest and refuses to join a group that he suggests. Her days seem to be the same, day after day, a mixture between being comforting in the monotony and yet stressful. McGahern also brings up the topic of infertility. Elizabeth regrets not being able to have her own children but she isn’t scorned by other mothers as she has stepchildren. Mrs. Casey, on the other hand, is scorned and bored due to her childlessness.

The Barracks is an interesting window into Irish society – I was left feeling that each character represented so many people and they were all in need of a good hug. In spite of there being plenty of company around, there was a feeling of isolation and desperation within the pages. It was almost as if each character had to prove their worth to others, afraid to show their weakness and not helped to develop their strengths.

Have you read it? I’d love to hear what you thought.

2 thoughts on “Book Review: The Barracks by John McGahern”