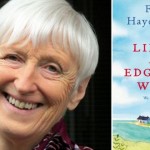 I’m going to the Wexford launch of Felicity Hayes-McCoy’s latest book in Enniscorthy library on Thursday evening and very much looking forward to it. Hachette sent me a copy of The Library at the Edge of the World and I’m delighted to review it. 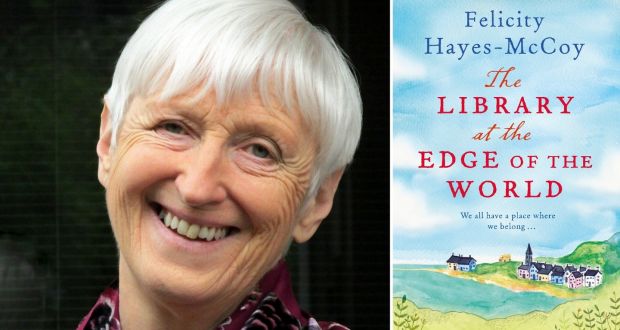 I have to admit that once I was a couple of chapters in, I was wondering was it going to be one of those ‘woman meets man, has turmoil, but ends happily with them madly in love’ kind of books but I’m delighted to say that once I’d read another couple of chapters, I let out a sigh of relief. I’m not going to give the ending away and while there are suggestions of romance throughout the book, things may not work out exactly as they seem. But I’m jumping ahead – I’d better tell you a summary of the book first.

Hanna divorced her husband many years ago and left their home in London to move back to her mother’s bright purple bungalow in the South West of Ireland. She brought her teenage daughter and got a job in the local library. Even though she was brought up there, she seems to be slightly aloof and likes to keep her distance from the locals. She has her challenges: living with an interfering mother, struggling financially and for independence, wondering where to put down roots and yet feeling passionate about doing her bit to strengthen jobs and community spirit in that part of the Wild Atlantic Way.

Hayes-McCoy has succeeded in combining the descriptions of the beauty of the Wild Atlantic Way with the turmoil of unemployment, loneliness and little investment in a good summer read. It becomes evident that the mobile library bus in a lifeline for so many people living in isolated areas but what about when investment is going to another part of the country and Co. Finfarron might lose jobs, amenities and yes, the library in Lisbeg might go too. What about when people want to stay in the area and it’s their part-time jobs that help their family farm survive and keep families together? What about the relationships and school that will close if people emigrate? There are suggestions of brown envelopes, blackmail and bribery. Hanna has a number of hurdles to overcome: people see her as aloof, she may lose her job and she may end up penniless and horror of horrors, living with her purple-loving mother forever. There’s a lot of issues in this book that wouldn’t go astray in a dark dark novel of the Donal Ryan ilk so although they are encased in a good summer read, there’s still plenty to ponder and debate.

There’s some great characters in this book.  Hanna struck me as someone who isn’t easy to make friends with but once she likes you, she is a friend for life. She won’t annoy you by calling around often either! My particular favourite is Fury (with his dog the Divil). Despite living abroad for many years too, he is right in the middle of the community. He knows many secrets, he has his own way of bartering and getting business and yes, I think anyone renovating a house would like a builder just like him. He reminds me of a builder we knew in the UK, he provided us with a few things that came second hand from other houses and were a fraction of the price that they would have cost if new. There are many villages like Lisbeg all over Ireland with people just like these characters, I’m hoping every single one has a Fury.

There’s a nice interview with Felicity in the Irish Times and if you’re heading to Enniscorthy on Thursday night, I look forward to seeing you there. The Library at the Edge of the World is a good holiday read that will give you insight into just what small communites can achieve as well as what they are up against sometimes. The good news is that there will be a sequel out next year too.