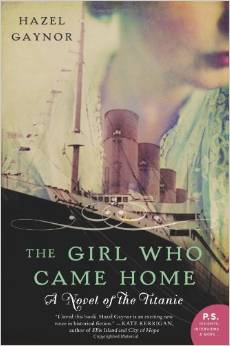 The Girl Who Came Home is an Irish story about the Titanic. It tells the story of a group of fourteen who left a tiny village in the West of Ireland to travel to America, to their new lives, aboard the Titanic. Many books and films have dealt with the Titanic before but most tend to concentrate on the first class passengers, this novel focuses on the steerage passengers and the accounts of the finanically well off are seen through their perspectives.

Originally self-published as an ebook on Amazon, Hazel Gaynor’s book was noticed by a US agent who contacted her. The result is publication by William Morrow / Harper Collins and being published across the US and UK as well as Ireland and it has already hit the best seller lists.

The book is, of course, based on truth. Reading the book, we all know that the Titanic is going to hit an iceberg and sink, bringing many of its passengers to their deaths. So how does an author writing about the Titanic build in suspense or intrigue for the reader?

The book is based on the Addergoole Fourteen, fourteen men and women who left the west of Ireland to start a new life. The characters are based on some of the people within that Addergoole Fourteen. We witness the leaving of her home by 17 year old Maggie Murphy as she leaves behind a young sweetheart, her reaction to the size of the Titanic, the comfort of the steerage cabins (which sounded much more comfortable than I expected), her peeking at the first class and the comparison between them, the friendliness of the staff and the despair on the night the ship hit the iceberg. ?Her recounting of the trip and her survival only happened years later when her great grand-daughter Grace was of a similar age to when Maggie arrived in the US.

Suspense and intrigue into this otherwise well known historical fact are created in a number of ways:

Did Maggie ever mean her young love again? What did he write in the letters?

What will happen regarding Grace’s writing career and her love life?

We witness how Maggie was affect by that fateful night. How did it affect the other survivors’ lives?

The book contains plenty of historical detail too – the fact that wrong messages were sent to family members regarding survivors, the length of time they had to wait in the lifeboats, that the steerage passengers were paid $25 in return for their agreement not to sue the shipping company, some telegrams, some tickets, the boy with the spinning top, the dogs of first class passengers that survived, the locking of the gate to prevent steerage passengers coming up on one deck. ?I was surprised that Maggie’s aunt Kathleen had returned from Chicago to stay with her for a while after her mother died and escort her over to the US. I hadn’t imagined that they would have been able to afford the time off work let alone the return passage, I’d presumed that relatives sent the fare for a single voyage and the emigrant made the journey on their own or with neighbours.

The last book I read was The Yorkshire Shepherdess and Amanda had used dialect in her dialogue. Given that the Addergoole Fourteen weren’t well off and were from the West, a stronger Gaelic speaking area, it seemed strange that their dialogue was so correct. Although Seamus refers to getting help from someone to write his letters, they still seemed too polished. It just made it hard to suspend realism when reading these parts.

You’ll have to read the book yourself to find out if Maggie ever did go home or not, if she ever found Seamus again and indeed, what happened to Grace. Enjoy. You’ll get it in all good bookshops and on Amazon.