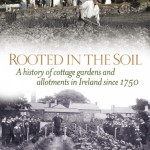 I always enjoy the writing of Mervyn Watson and Jonathan Bell: academic yet accessible; informative with lots of interesting nuggets, and it always has a gentle and respectful tone to the time and subjects they have researched. Strange but their writing always brings a certain sense of peacefulness when reading. 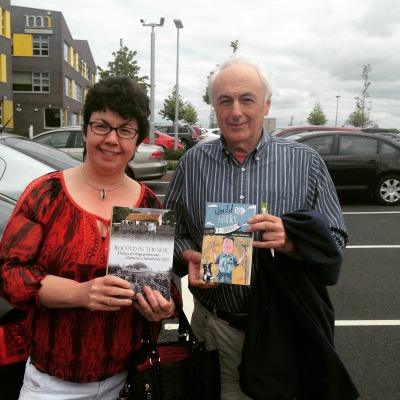 This book is Rooted in the Soil: A history of cottage gardens and allotments in Ireland since 1750. I had always assumed that most cottagers as well as small and strong farmers grew their own vegetables but so did those with a trade or profession such as teachers, priests and craftsmen. Cottiers often received a small plot of 1-2 acres and a cabin in return for labour for a farmer. There were interesting discussions after the Famine regarding the value of encouraging people to have gardens and grow other vegetables than just potatoes. Some saw it as leading to self-improvement and food security. Others thought it would increase the population again (which was deemed risky) and if people were tending to their vegetables in the evenings, they wouldn’t work as hard in their main jobs. In the early 20th century, the building of cottages were publicly funded for labourers and each cottage had enough land to grow their own vegetables and sell the surplus, hence there was action in encouraging people to become more self-sufficient. In 1926, almost half of married farmers farming 1-5 acres lived in a one room house compared to a quarter of the labourers.

I had assumed that our predecessors learnt about vegetable gardening from their parents but not necessarily, gardening classes were often provided, particularly for those using allotments. As you might expect, the number of allotments increased in WW1 and were often provided free of charge. There were two demonstration plots in St Stephen’s Green to show people what they could achieve with their own plots. In Belfast, people had to grow at least four different types of vegetables plus a border of flowers. They weren’t allowed to work in them on Sundays.

WW2 saw an increase in allotments again and apart from the vegetables, they provided a social aspect as one man recalled his father and other people “leaning on their spades gossiping”. (Just like farmers and council workers, as long as they had a space in their hands, they felt they were working!).

Bell and Watson devote a chapter to women and horticulture which I was delighted to see and there’s many references to women gardening throughout the book too. Many gardening experts ignored women but not all. Colleges for gardening courses were set up from 1898 and the ICA (formerly known as Society of United Irishwomen) also saw the importance of gardening for women. Some felt that gardening could provide women with careers, others recognised the value of pin women by selling surplus. As farmers’ wives and daughters were already looking after poultry and the dairy (seen as “lighter” farming tasks), it was viewed that gardening was another “lighter” branch of farm work. Others took a rather patronising approach in recognising the skill of women in gardening.

The school (Irish School of Gardening) has been visited by expert gardeners who expressed surprise at the manner in which the plots had been cultivated – and by the ladies, too. (Irish Times, 13 September 1916) 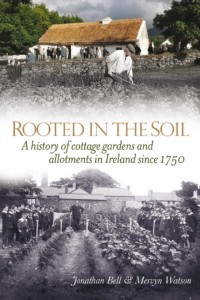 The final chapter reflects on modern day vegetable growing. It stagnated in the 1980s as it was viewed as something only poor people did (I remember cycling was viewed the same way by many people around here, it was something you did  to get from A to B if you didn’t own a tractor or car, rather than for relaxation). But post 2008, with changing interests, enviromental concerns and the recession, growing your own is enjoying a renaissance. Long may it last.

I really enjoyed this book and if you like reading about Irish history, small farming or gardening, you will too. Beautifully illustrated and including many photographs, it’s a book to treasure in its analysis and recounting of 250 years of Irish gardening. It’s now available in paperback and you can get it for €9.18 from Kennys.ie who ship worldwide for free or €8.95 from Four Courts Press. Perfect gift for Father’s Day too which is coming up. It really is a book to savour.

4 thoughts on “Book Review: Rooted in the Soil”