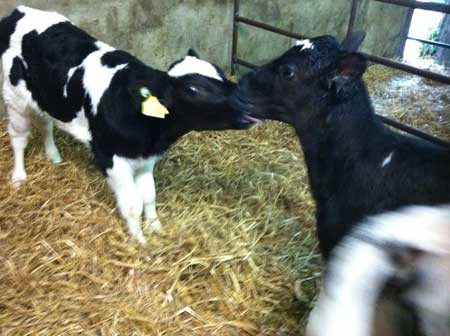 It’s unusual for them to suck at each other’s mouths though and it happened with these two while I was feeding another pen so out I whipped the phone and snapped a quick picture.

I was asked recently on twitter why is it so difficult if a calf is coming backwards. I’d just returned in from helping ?Brian deliver a huge calf that was coming backwards. The reason is that if a calf is delivering normally, the front feet will come first followed by the calf’s nose and head. As the head emerges, the cow will be opening up more to make more room for the shoulders, the length of the calf’s body and the hips. As the calf moves out along the birth canal, as the rib cage comes out, it passes the mucus out of its mouth and the umbilical cord will break and the calf will start to breathe.

The problem when a calf is coming backwards is that the back legs come first followed by the hips which if large, let’s face it, the poor mother is going to know all about it as the largest part of the calf comes out first. The risk too is if the calf gets stuck or we’re too slow in pulling it out, that once the umbilical cord is broken the calf might smother. ?One also has to ensure the tail is coming too as if it is twisted back, it will be like a large blockage preventing a smooth birth. ?Last year, Brian was frantically feeling for a tail on a calf that was coming backwards and couldn’t find it. When it was born, it actually didn’t have a tail at all – first time that ever happened to us!

If the backwards birth is too slow, It can happen then that the calf is dead when it is born or that it is brain damaged and will only live for a couple of days or perhaps that they are a bit slow for a few days.

This particular calf that was recently coming backwards was a huge bull calf. We knew the sire was a Belgian Blue which wasn’t going to help matters either. We managed to get it out in reasonable time but as it lay on the ground, there wasn’t much sign of life. What we have to do then is pull the calf’s back legs over a gate so it hangs down and we can push on the lungs and clear the mouth of mucus, tickling the nose with straw to get it to breathe. ?As Brian gasped, ‘We’ve got to get it over the gate’, I just looked at this monstrous calf and gasped ‘How?’ ?Usually I hold onto the legs that are slung over the gate while Brian clears the airways but this one was too heavy so Brian held the legs over the gate while I cleared the mouth and tickled the nose and after a couple of minutes, it was clear he was fine, a strong healthy bull calf.

We heard recently of a farmer who was calving a cow who was very tight (not much room around the calf) and all he could see was one front leg and he just couldn’t find the second leg. The vet was busy elsewhere doing a section and by the time the vet arrived, things hadn’t improved much. The vet couldn’t find the front leg either and they ended up doing a caesarean section. ?It was the first time the vet had seen a 3 legged calf, there wasn’t even a stump there for the fourth leg. The calf was actually able to balance itself in the pen on just three legs.

There is nothing as nice as seeing a newborn calf being licked by its mother so quickly after being born (it is amazing how those instincts kick in) and seeing it stagger to its feet to have a feed. Nature really is wonderful and although it sometimes needs a helping hand and sometimes things don’t work out as planned, death of an animal always makes us appreciate the live ones more.

One thought on “Calves Coming Backwards”