I spent most of today on the farm today and it was lovely. I’ve been so busy lately and Brian didn’t really need me much so I just haven’t been doing much farming and I missed it. Between organising the Blog Awards, getting ready for the Ploughing and other things, the month of September has just flown. ?The Blog Awards was a great night, you can see all the photos here, the 80s theme worked great, lots stayed to dance, the atmosphere was really good?but I feel like I’ve been run over by a steam roller this week. It wasn’t necessarily a good idea to do the 3 days of the Ploughing Championships followed by managing a fairly big event all in the same fortnight! 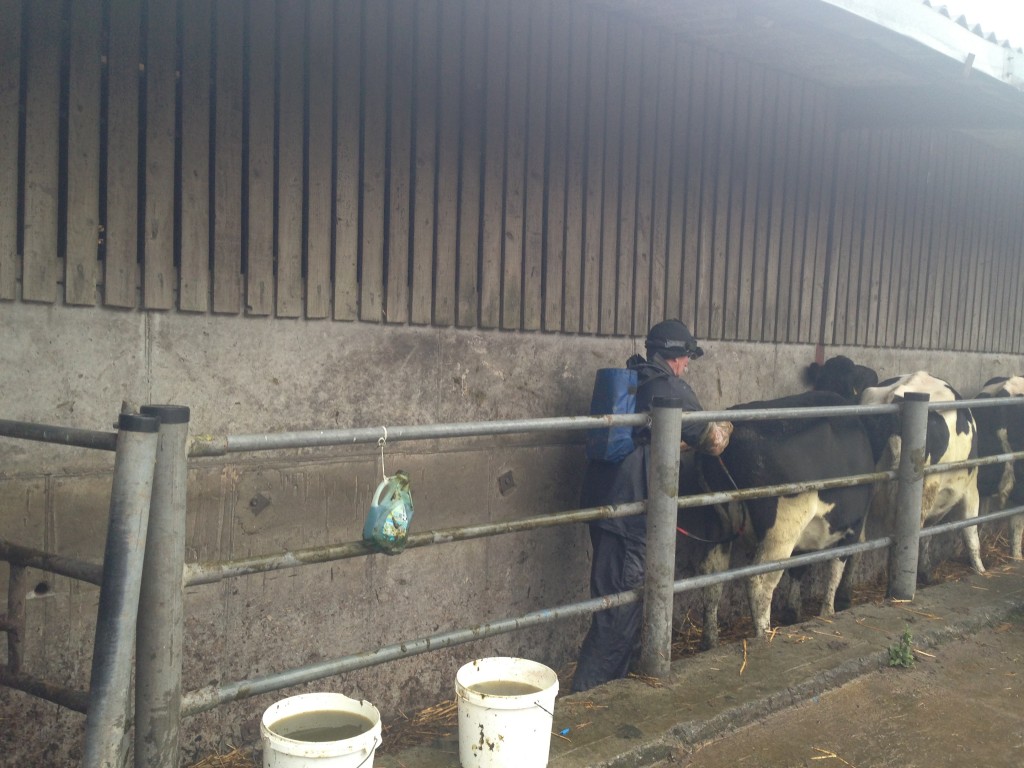 We scanned the cows and heifers today to check that they were in calf as they should be and to check their delivery dates. The cows were up first. The AI guy pushes the ultrasound probe into the rectum where it can see through into the womb, he can then gauge the age of the calf. 4 older cows hadn’t been put in calf but there were 2 cows that were in calf and lost them. One cow was a particular favourite, she is red and white, her name is Katie Lou, she had cancer in one eye a few years ago and we got it removed. When the bill came and it was about ?300, I remember thinking we were a bit mad to spend that on her rather than culling her but they are always more special when they are named. Poor Katie Lou will now be culled, it’s too late in the season to put her in calf again.

We lost a cow called Daisy too a couple of weeks ago. She milked fine, perhaps a little less than usual. Brian was going along the car road after milking to shut them into the field and she was lying in the middle of the track and had no intention of getting up. It was 9:20 pm so the vet wasn’t too enthused about coming out. Brian went back to get nuts to see if that would tempt her and by the time he was back to her, she gave a couple of bellows and just died. ?Just as well the vet didn’t come out! He said it sounded like it was a heart attack. She was about 5 years old and a favourite of ours. Heart attacks can happen to young and fit humans ?so I guess it is normal that they happen to bovines too. 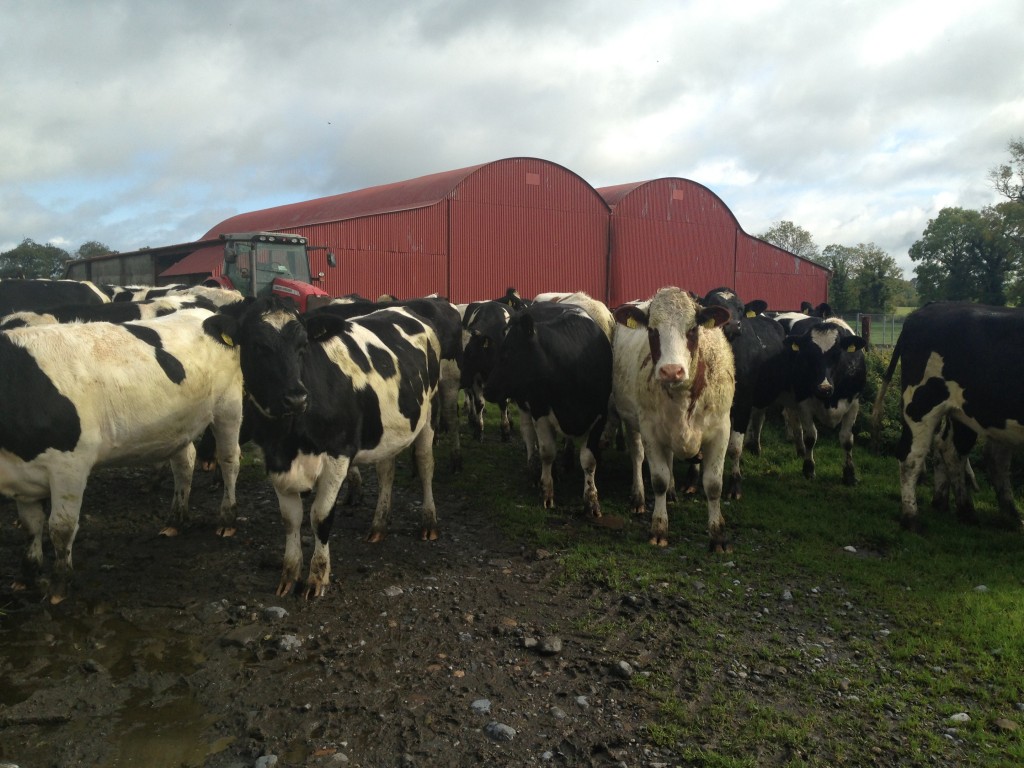 We have a lot of replacement heifers for next year – 70. We usually have around 50 so we’re going to have a busy spring! We knew a few of the heifers weren’t in calf but it was better news than we thought. There were 3 heifers not in calf and one had miscarried within the last week or so. All were fine so we may put them in calf in January and sell them in the autumn to autumn calving farmers. There are two freemartins (heifers that were twins of bull calves and are hence infertile). The heifers are a good size and weight, they benefitted from the good grass this year on the fresh re-seeds and have done really well. I have to say they were a bit bemused by all the goings on. Brought into a shed, then brought one at a time into the cattle crush where one man does something bizarre at their rear end, calls out some numbers (I was the scribe and the rounding up person) and the farmer injects them with salmonella vaccine. I’m sure they went back to the field saying to each other ‘what was that all about?’ 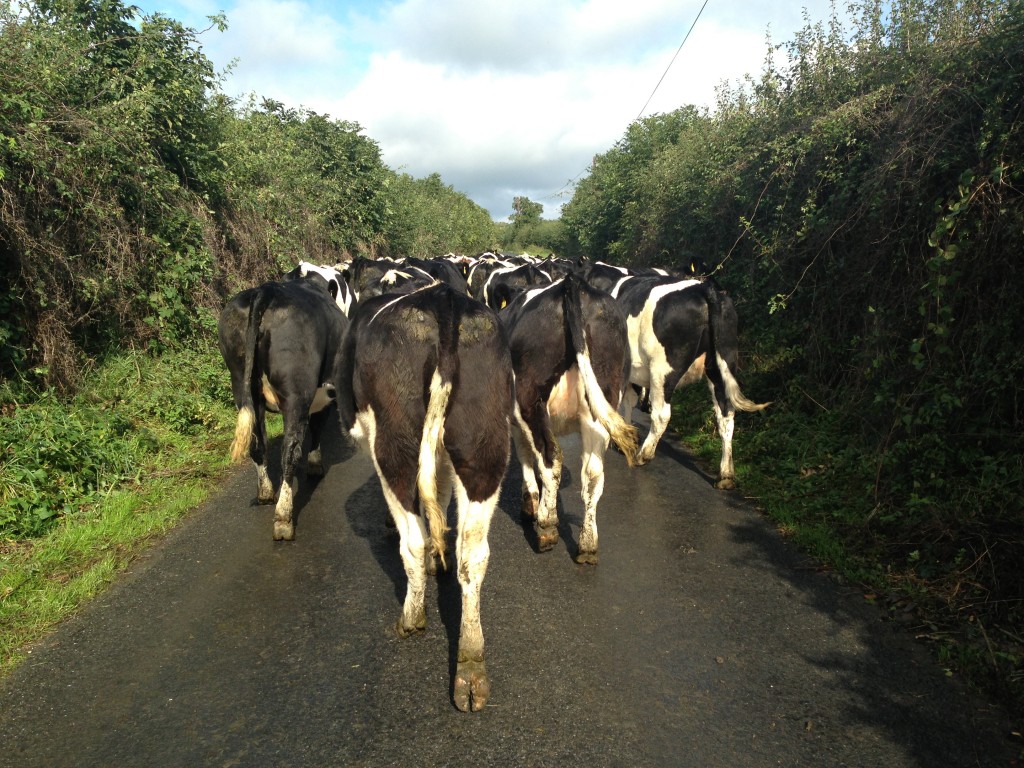 We had used 20 sexed semen straws this year. One of them was the dead calf so she held the pregnancy for four months but something must have happened in the 4th month. ?It looks like 16 of the 20 held to their first service (ie went in calf when AI’d with the sexed semen) so it will be interesting to see how many have heifer calves in the spring. ?It is really important in dairy farming to have a compact calving system – we want as many cows and heifers as possible to calve within a 6 week period. This maximises profits, means that they milk from February / early March through to early December when they are dried off for a rest. A cow calving in April or May will still be dried off in early December but she won’t have given as much milk. It also means that we’re busy with calving for two months but then it ends – we might as well be up at night with 4 cows calving as one! ?Hence, every May, it is really important to spot the cows and heifers on heat and ensure that they are inseminated (usually by artificial insemination) on the right day. Missing them or getting it wrong ends up costing money.

Our herd does well on fertility, occasionally it will be hard to get a cow in calf because she had a tough or late calving. It is surprisingly easy for cows to miscarry too. For example, last year, heavy rain after good sunshine increased the nitrogen in the grass to such an extent that 6 cows lost early calves and came around cycling again so we had 6 cows calving 9 weeks later than planned this spring.

For 2015, our calving will start on 6th February and there are 110 to calve in the first three weeks. We have handy housing for 88 small calves so that will be interesting – the last 22 will be in makeshift pens in the hayshed! ?March and April are fine and then we have a few calving in May. There were a few cows which had early miscarriages and were then AIed / bulled again to give them another chance and they went in calf. A couple had tough calvings last year and just took longer to go in calf. A couple of heifers are going to be late too. If we were really ruthless and wanted to keep to a 6 or 8 week calving period, we would have culled them but they are good animals and I reckon having 75% calving in 3 weeks will keep us going anyway! What happened this year was most went in calf on the first cycle or else it was hard to get them in calf. March looks quiet and then there are minor surges in mid April and mid May.

Part of me is wincing at the thought of such a busy February but part of me is getting excited at the prospect of new life. Autumn calving farmers are sharing pictures of their baby calves on twitter and it’s making me feel broody for baby calves! Oh, 4 cows are expecting twins too – always a bit of extra work but always special especially if twin heifers are born. One lady is on her tenth lactation and it will be her fifth set of twins.

Did I mention that two of our four hens disappeared. I was sure the fox had got them. For the first couple of days, I was hoping that they had just gone walkabout as on the day they disappeared, I had let them out for longer than normal. One hen had previously disappeared for 3 days and re-emerged. These two were missing for over a week so I was blaming the fox. We were scanning the cows today when a hen suddenly emerged from the straw bales of the hay shed. She had a huge drink and when I put her into the hen house with the other two, she started eating immediately. She must have got lost in between the spaces of the large round straw bales and took days to find her way out. I can only presume the other one is in there too somewhere. Talk about a complicated and dark maze!

Oh, it was lovely to have a radio interviewer phone me yesterday and say that he started smiling when reading the first page of my book and he was still smiling when he finished it. He interviewed me last night on Radio Mid West, a really nice chatty interview. ?A Wexford farm woman phoned me this morning and asked me to visit their farm women group in November and give a talk for an hour – should be interesting!

2 thoughts on “Cows In Calf”