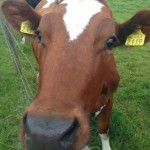 It’s quite a while since I last wrote a ‘My Farming Life’ post – mainly because writing, editing and self-publishing took over. It doesn’t mean life on the farm has been quiet though, there’s been lots going on.

One thing we did was we have registered our dairy herd as pedigree now which is exciting for us. What was even more interesting was choosing names for them. There’s just over twenty cow families in the herd so we had to provide over twenty names. We opted for the traditional ‘cow’ names such as Buttercup, Blossom, Clover, Daisy etc as well as some female names we liked. As a homage to the Harry Potter books, we included a Luna and a Minerva too. We drew the line at Hermoine! It’s more difficult that you’d think to come up with that many names – they have to roll off the tongue, be suitable for cows and yet have a bit of personality about them. The funny thing was that IHFA allocated the names so did the personality of the cow suit the name?! Some did, some didn’t! 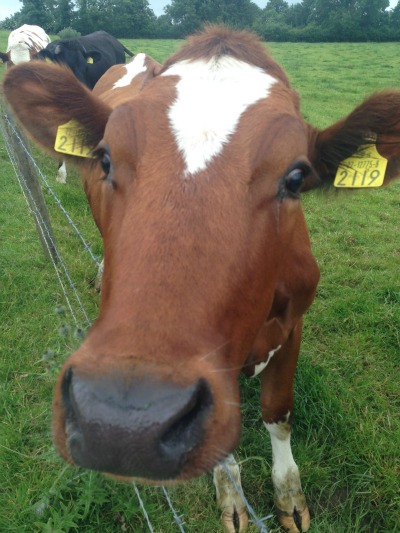 Bluebell – she’s as bright as a button so that one hit the nail on the head.

Bella – the original matriarch in this family line had five or six set of twins and her daughters and grandaughters have proved to be steady, constant, reliable and hard workers in producing good milk. So another one that is right on the nose.

Blossom – this line are quite petite and cute so yes, it works fine.

Molly – well, the one Molly we have in the parlour is a bit of a demon but that’s not down to the female line. Her sire is VML and thank goodness we haven’t many sired by him as all of them were demons to train in to the parlour as well as being flighty and stroppy. According to our AI guy, other farmers haven’t experienced that so maybe it’s a clash with our genetics but it’s heifers like that which make us glad we used a wide variety of bulls.

Primrose – this is our largest cow family with over 30 cows and heifers being in the Primrose line. The original was one we called Queenie and she lived to 14. Primroses come back year and year and always make me smile so yes, seems good for our most dominant cow family.

Delilah – this is Guinevere’s family (she’s our best calf of 2015) so she, her mother and sisters will all be called Delilah. Gosh, when you think what Delilah did to Samson, I hope these are more trustworthy!

Lottie – she’s a big cow, gentle and quiet but also firm. You wouldn’t mess with her.

Penny – small, cute and a good solid milker. Perfect name for her.

Lady – hmmm, I’m afraid this name ended up being quite ironic as she isn’t really a lady. She’s fine but gets stressed easily. She doesn’t like being at the end of the milking line and gets a bit anxious when she’s waiting for the others to file out before her. That means her tetchiness leads to, yes, projectile poo.

Some Science in Farming

We got the yearling heifers genotyped recently too and will be getting the heifer calves of 2015 done shortly. This involves pulling a vicegrip full of clean hairs from their tails so the hair follicles are still on them, placing them into a special individual envelope and sending them off to be DNA tested. 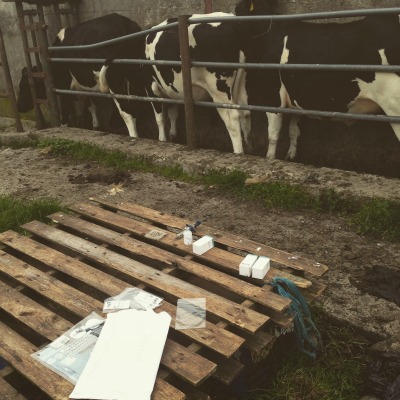 We receive back an EBI (Economic Breeding Index) score for each animal which could be more accurate of their future performance than the one given to them at birth, based on the divided scores of their dam and sire. Some went up, some went down. A couple of nice surprises too and Guinevere is now the second best calf of 2015 with another one passing her out by one score.

Heifers Had A Party

The weather has been good up to last weekend when it rained and rained. The cows started complaining at the field gate at lunchtime so they came in at 2pm to a dry shed and bales of silage. We had an incident with baled silage some time ago. It was a good summer so we actually made more bales of silage than usual. Most of our grass silage goes into the pits and is covered with polythene but we make bales from fields of surplus grass. The grass isn’t that long so the quality is good and of course, the quality is important in terms of maintaining the butterfat and protein levels in the cows’ milk. Therefore all the bales were destined for cow consumption.

As we had so many, some were stacked in front of the pit silage on the outfarm, separated from the cattle in the field by gates and an electric wire. However, one day, the wire was switched off. Usually the cattle presume it is still on and remain wary. Brian went over to herd and over the wall of the pit, he spotted a lone heifer looking back at him.

Double take and a pause as he wondered if he was seeing things.

As he turned the corner to work out how she had got in there and get her out, he realised that she was just playing ‘Paddy Last’.

It looked like each and every one of the 39 yearling heifers had knocked against the gates, jumped or stepped over them, jumped on the bales, tore the plastic, ate chunks out of the bales of silage and then decided to have a disco amongst the tyres on the pit silage. To say the air turned blue would be putting it mildly. The lone heifer made the wise decision to take a running jump back to the others and they all stood and looked at him, not aware that they were perfect target practice if there had happened to be a gun nearby!

By the time the bales that could be salvaged were repaired, tyres taken off the pit, €100 worth of new polythene put down, polythene higher up repaired, tyres thrown back on and the 14 ruined bales divided between home and outfarm, we were all annoyed with them. The smiles were wiped off the heifers’ faces too as they didn’t get access to the sweet green grass beside them but had to eat six bales of silage before they were moved. Since then, they have all been scanned now to check they are in calf and receive confirmation of the expected calving dates. Interestingly, apparently the number of cows being scanned as having twins is really high, up to 10% in some herds but we only have two cows scanned to expect twins.

What else has been going on? Well, we’ve a Bord Bia audit coming up which means checking that the i’s are dotted and the t’s are crossed and of course, it’s a few hours of our lives we won’t get back but it’s go to the stage that it’s compulsory now, or at least it is with Glanbia. Milk price isn’t great at the moment either – base price is 24c a litre now with Glanbia, they were the only milk processor to cut the price last month. I suspect it’s because their new processing plant isn’t working out as planned. We have a good percentage of our milk at fixed price with them which makes a difference to the income thank goodness but we’re all hoping price goes up again soon.

Here’s a little bit of good book news. How To Be A Perfect Farm Wife is now available in all Irish bookshops, Easons have ordered 190 so far. It’s also available as a paperback from Amazon now too.

I travelled to Dun Laoghaire today to join Ciara Meehan in an ‘In Conversation’ chat about Irish women in the 1960s and their expectations of marriage. Ciara currently has an exhibition in the DLR Lexicon entitled Modern Wife Modern Life which includes analysis of the content of women’s magazines, interviews and artefacts from the 1960s. I had really enjoyed researching farm women’s experiences of farming from the mid 20h century for the book and it was a bonus to discuss it all in this setting (it was recorded so the podcast will be available soon). Social media is wonderful as I first met met Ciara via Instagram.

My  Book Blog Tour kicks off on Tuesday with Mairead of An American Mom doing a review and there is a giveaway for a signed copy too so do pop over.  I’m delighted to have so many bloggers reviewing my book and it’ll be interesting to see the different perspectives too: a historian, a book reviewer, my editor is interviewing me, three farmers, a lifestyle blogger.

Hope you’re having a good weekend too. The kids are back to school on Monday, we’ve had a lovely week with the fire lighting, baking and making lego. I intended having a go with rosehip jam but maybe this week! Wish us luck with the audit!