Some of the calves have been weaned now and some are being fed with milk just once a day. There are still about 60 calves in 2 sheds that are being fed twice a day and I look on it as my twice daily workout! 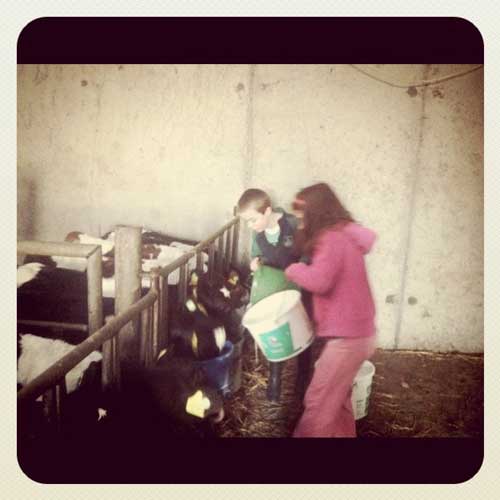 I actually miss it if I have an appointment or have to go somewhere in the evenings. There is something nice about being out in the fresh air, using my muscles and connecting with so many young animals, seeing them literally grow before your eyes as they grow so quickly in the first couple of months.

Calves are taken from their mothers soon after birth in a dairy herd whereas in a suckler herd, the mother would only give enough milk for one or two calves so the calf suckles the mother. It is extremely important that they receive colostrum (mother’s first milk) very soon after birth. In fact, Teagasc recommends that all calves should be tube fed the colostrum within 2 hours of being born (but they are sitting in a nice warm office!). ?They either suckle the mother or are fed the colostrum from a large bottle. The calves are then put into a pen with others (either 4, 5 or 6 calves per pen depending on the shed they are in), and they have to be taught how to drink from a bottle as the natural urge is to suck upwards. Brian does this job as due to my eczema, I find the mixture of the milk and the calf’s saliva on my hands, it drives my skin mad. I feed all the calves that are able to drink on their own. 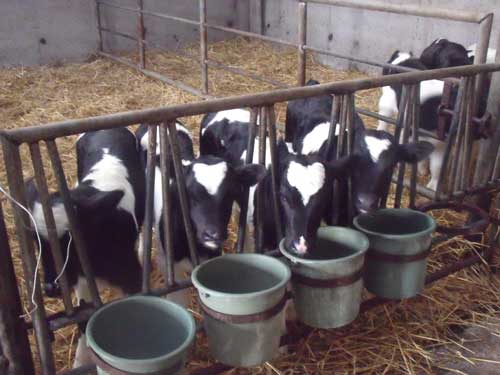 Many farmers will have more modern methods of calf feeding whereby they suckle from a large wide buckets which will have about a dozen teats attached to it so they can be fed in larger batches and it is just a case of putting milk into larger containers rather than many individial buckets. Many farmers will have a pump too that delivers the milk to the calf shed rather than Muggins have to carry it across in 3.5 gallon buckets 🙂 Crazy Moos recently posted on how they feed their calves in California which was interesting to read – they house them in singles or pairs and bucket feed them too but have a little wagon to drive up and down with the milk but it is a much bigger operation than ours. 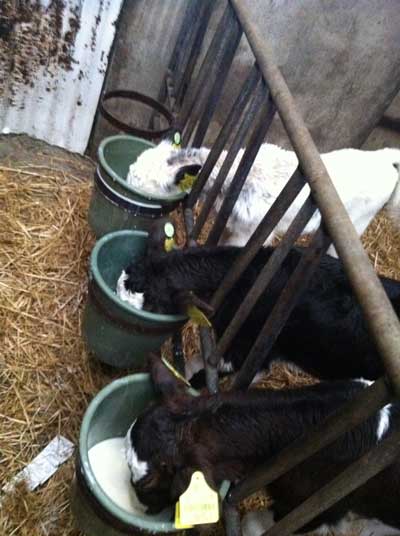 The triplets are doing well by the way, as you can see, the 2 boys are marked like Friesians so either take after their mother or they were sired by the bull whereas Betsy is a Belgian blue, sired by an AI (artificial insemination) straw.

One thought on “Feeding Dairy Calves”