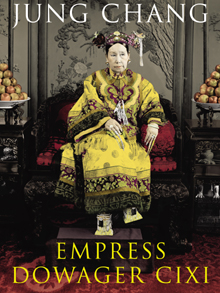 Many years ago, I read Wild Swans by Jung Chang and thoroughly enjoyed learning about China’s history to some extent via this history of three generations spanning many decades. It became a bestseller and was translated into many languages. Perhaps unsurprisingly, it was banned in China.

I enjoyed reading Empress Dowager Cixi, it gives an insight into China that I knew very little about. Telling the story of how a young concubine, largely illiterate but very intelligent, managed to rule China after the Emperor died as she was mother to his two year old son. Despite having limited powers in terms of an inability to travel and having to talk to advisors from behind a screen, she was very influential and brought about huge changes – both politically and culturally.

Apparently Cixi is not remembered well in China and Chang has worked hard to refute the tarnished Chinese memory of her. Perhaps too much so, one gets the impression sometimes that she idolises Cixi and finds very few faults with this imposing monarch. Anything that is seen as somewhat suspect is explained away – from what I remember the whole fault was perhaps that while Cixi encouraged the cessation of the binding of little girls feet, she didn’t make it compulsory and Chang’s grandmother had to undergo it, just like millions of others.

Cixi was an incredible woman, there is no doubt of that. Managing a coup, ruling for over 4 decades, realising her son and stepson were not going to be good rulers and managing to reclaim power, it really is an incredible history. Her interaction with the West, wishing to learn from them, her admiration for some rulers – all show here to be progressive.

Chang recounts how she got rid of many traditional punishments including ‘death by a thousand cuts’ in which the victim was basically flayed alive until dead. Your stomach will churn reading some of the punishments as well as the way people who disobeyed were ‘encouraged’ to commit suicide if they were lucky. Life seemed very cheap in many ways in that the numbers dying from starvation, in war and by punishment just seem extreme to me reading it in a tiny country in 2014! ?The extreme poverty is revealed by explaining how the eunuchs were castrated – it was basically the sons of the poorest families who were brought to be castrated at the age of about 6 in the hope that they could enter the Forbidden Palace – I can’t even comprehend the pain they must have endured. Other men ridiculed them and they had problems with incontinence throughout their lives.

China experienced war with many countries during these decades – with Japan, France and Japan as well as being invaded by numerous countries. There were internal rebellions and factions that threatened her leadership too. ?However, Chang works hard to show that, for the most part, Cixi did her best to prevent war and industrialise China such as introducing the railway.

It’s an interesting way to learn of China’s history by reading so much about this female monarch who was not there because of birth but because of luck and intelligence. She was an incredible woman and while I’m sure Chang has done much to right the wrongs in revealing her story, perhaps she idolises her a bit too much. ?I really enjoyed it but it is a dense read. I took breaks from it to read other books and then returned as it was heavy going. ?Having read it though, I’m all set to read Chang’s biography of Chairman Mao next.