Hi, it is Maggie Moo here again and I got big yellow earrings since the last time you saw me. 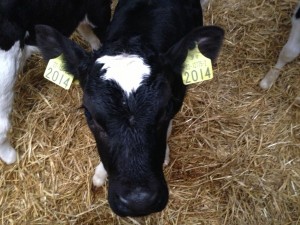 Coincidentally, it is the year 2014 and my tags have the same number. The reason we have tag numbers is so that we can be identified and traced. If there is ever a problem with a disease (such as Foot and Mouth in England a few years ago), all bovines can be traced to the farm they came from, how many times they moved, their sire (father) and dam (mother). ?My birth has been registered too and my passport has arrived. I won’t be using it to fly off to America on a $10 flight or anything but it travels with me should I ever move from this farm. ?Mine has my tag number, my date of birth, my sire and dam, the name of my owner and it will have to be signed everytime I have a TB and brucellosis test to show I am free from those diseases.

We have two tags in case one gets lost. I guess it is handy we have two ears then!! ?If one is lost, the farmer has to order a replacement. ?If there is an inspection by the Department of Agriculture and we are missing tags, the farmer is fined so it is taken very seriously. 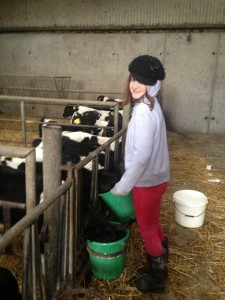 There’s over 80 calves on the farm now, calving is a bit slower than last year apparently. A few cows lost their babies very early on when there was heavy rain which led to a surge of nitrogen in the grass. They became pregnant again but won’t be delivering their calves until the end of April. There are 27 in my shed and we are all fed our milk twice a day in buckets. There’s 42 in another shed and they are fed their milk in buckets too. 19 fit into the old stable and they are fed in teat feeders – it is half full now. 11 calves were born in 24 hours last week which is a record for this farm – up to now it was 10 in 24 hours.? 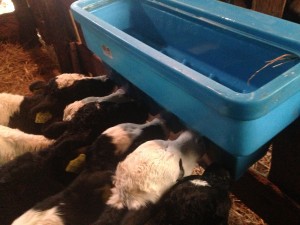 It’s been raining a lot so our mums are still in the sheds day and night and they are milked twice a day. The ground is really wet and it is cold outside too. I’m glad to be in a warm straw shed. One of the cows waiting to calve in the shed next to us was telling me that she was born in 2009 which was a really wet summer. They were out in the Lee field, which luckily had plenty of trees and hedges around it and it just rained and rained one day and one night. They couldn’t get any sleep, they were hungry, wet, cold and tired. The farmer came down to get them all with his dog and brought them all into a warm dry shed with lots of warm straw. They slept all day and every so often one of them would wake up and head over to get some meal and then fall asleep again. It was a terrible summer of rain. 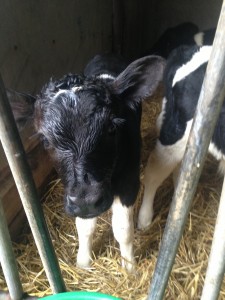 This is Guinevere. Her mother is the best cow in the herd with an EBI of over 300. She is one of the best cows in Ireland according to the ICBF list. If Guinevere had been a boy, he might have been purchased by one of the AI companies to create semen to father lots of babies. She will stay in this herd forever now, just like me. The farmer says she’s the cow of the future. ?Isn’t she pretty with her long eyelashes?

Not all the calves have been named by the farmer. But they do name a few. The calf that was resuscitated is called Roddy. Another is Gertrude. Two rather crazy calves are Gavin and Stacey. The little heifer twins are Sugar and Spice.

The hens are in a house beside us. It is nice to hear them clucking. One has started laying and lays an egg every two days. After a while, they will be let outside during the day.

That’s all for this week, 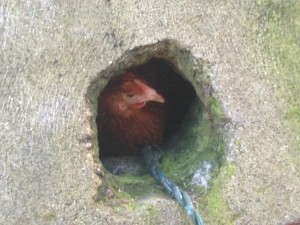 One thought on “Maggie Moo – Lots of New Calves”