Isn’t the weather fabulous? We have been basking in wonderful sunshine for the last week. It makes such a nice change after having to go back into the sheds last week.

We’re on a field called ‘The Banks’, so called because it was used for open cast mining here years ago so had many many holes in it! The banks refers to all the holes not a ready supply of money. The first Sixsmith to this area wasn’t a farmer. He was an engineer from Yorkshire who had experience with open cast mining, came over here and never left. Strange to think he probably walked across this field when it was being mined and then years later, his descendants were farming it.

The boys are across the road in The Chapel Field, no prizes for guessing why it is called that. You can just about see the white chapel in the corner of the photo below. We hear the bells ringing and the cars go to and fro. There’s more people walking along the road too as the weather is so nice. Goodness, they really do talk about the weather at length. Usually they greet each other with a ‘how are you, it’s a grand day’ but this week they are talking for up to ten minutes about how good the weather is, comparing it to previous Easters and trying to work out what the weather will do next week. 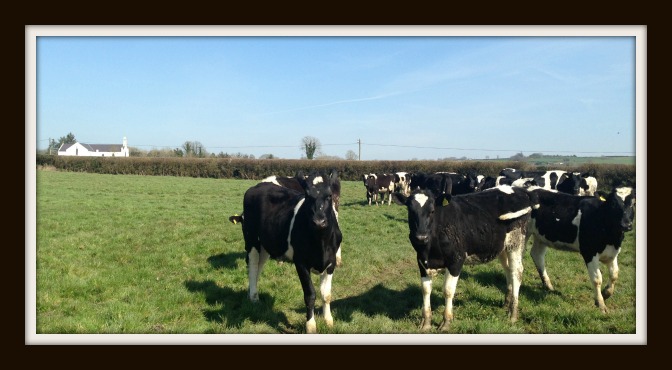 It’s lovely being in the sunshine but believe it or not, our days are incredibly busy. ?We walk much more than males and are often on the go. This does drive the farmer mad if the ground is soft, he seems to think we are deliberately walking around rather than standing in one place but we like to keep active.

We also have to chew our cud. It’s quite relaxing even though we pretend it’s hard work. I feel sorry for humans, they put their food into their mouths, chew, swallow and it is gone. We can bring up the delicious grass into our mouths again and really savour it. We like to look highly intelligent when we are ruminating as after all, thinking deeply while chewing the cud, is what it is all about. Today I was contemplating how lucky we are. All we have to do is provide milk twice a day and a calf once a year. The farmer has to work hard to grow the grass we enjoy – he has to fertilise it, measure it, plough it and plant new grass seeds – all we have to do is find the tastiest grasses and eat them. Humans think they are the most intelligent but I’m really not so sure but maybe that debate is for another day.

Some of the others use their chewing the cud time as an opportunity to gossip. Gloria and Frances are the worst and others dip in and out. They sit there, chewing with their mouths open and talking nineteen to the dozen about this and that. I just know that if I was to join in, as soon as I turned my back, they would be gossiping about me too. I prefer to use the chewing time to contemplate life, to look at the clouds and the beauty of the blue sky and just enjoy the silence. I like chatting as we walk around the field though. 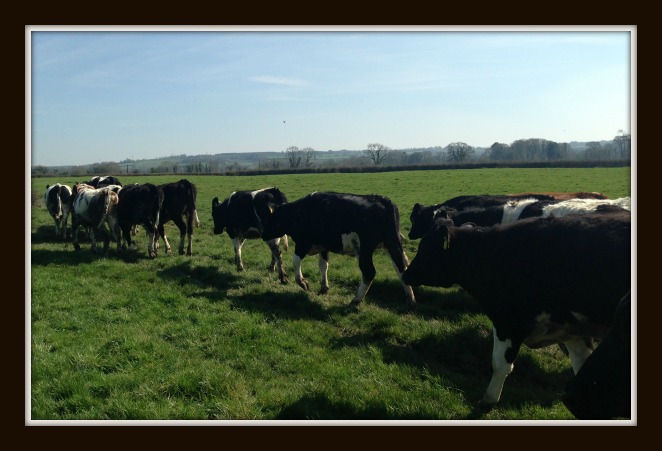 Going for our stroll

The boys are across the road and are so childish. There’s lots of organisations bleating about the Irish methane levels due to bovine flatulence. As the milk quotas are finished and some farmers are going to expand, they seem to think Ireland will be overrun with dairy cows – I think they are forgetting that many farmers are changing from beef cows to dairy cows so it’s the same difference when it comes to methane. Anyway, the boys think it is hilarious to blow raspberries and even hold competitions to see who is the loudest! 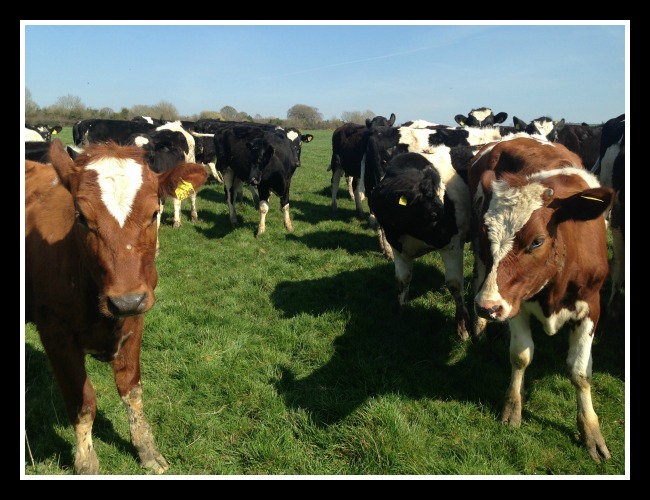 The breeding season will be starting in a few weeks so we’ll be heading back over to the home farm so it’s easier for the farmer to keep an eye on us. He makes notes now when he herds us as he is looking to see if we are standing still, jumping on each other or even if our ears are perked up. Gloria is a real pain when she is on heat, luckily, it only last about 5 hours but she never shuts up nor sits down for a second. The sooner she goes in calf, the better! I suppose we’re a bit like teenagers, full of hormones, wanting to primp ourselves so we look good and yet it’s a bit deflating to think we’re only going to look good for the AI man, although there will be a couple of bulls around at some stage.

I’ll let you know how it all goes! I have to admit I’m a little bit nervous but we’re all in it together I guess.