Hi, it’s Maggie Moo again, number 2014 in the Garrendenny herd. It’s been very busy lately, you wouldn’t believe the hard work it is being a calf. We have to sleep a lot you see. Once we get our warm milk in the morning, we have to lie in the cosy straw and sleep for a while. ?Then we have a skip around and eat some calf meal. There’s been lots of things happening on the farm too – some good and some bad. ?The weather hasn’t been that good and although our mums got out to the fields for ten days in March, all the rain meant they had to come back indoor again which didn’t please them or the farmer. The last few days have been fine so they are out grazing again. 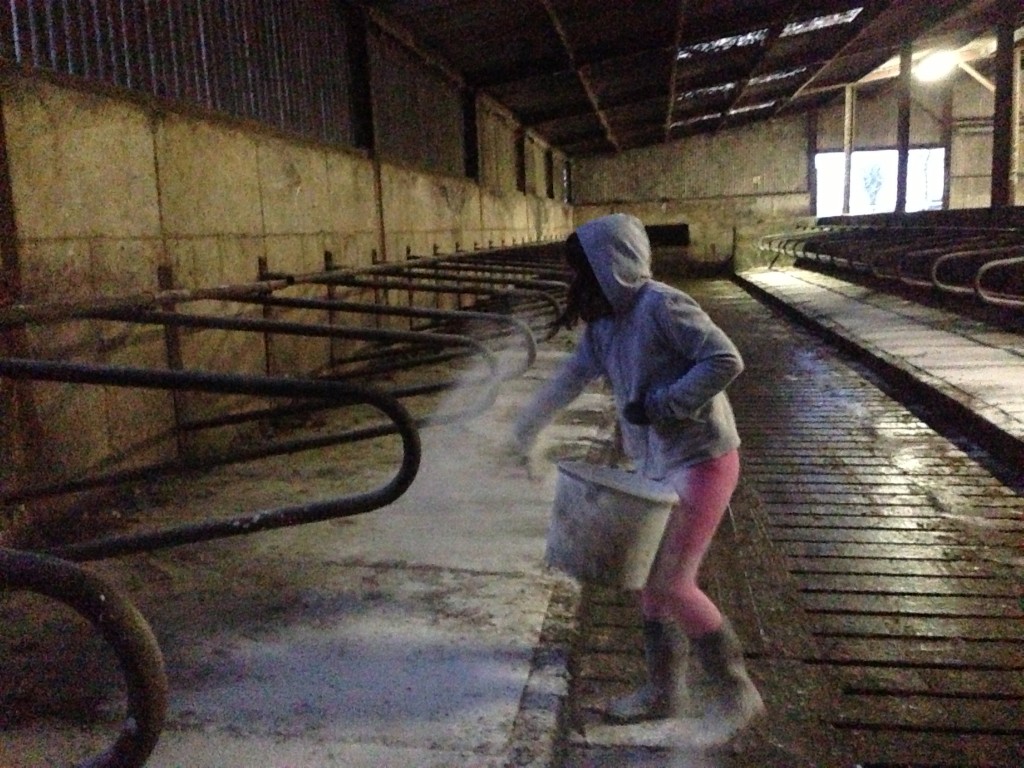 The mini farmer and mini farmerette don’t have to scrape, brush and lime the cubicles in the evenings any more so they are happy. We used to hear them chatting as they worked, it takes them about 45 minutes to do all three sections. The lime is used to keep the cow mats clean so the cows don’t get infections in their udders. ?They all have a comfy cow mat to lie on and then they step down to the slatted area to walk around and go to the feeding area. 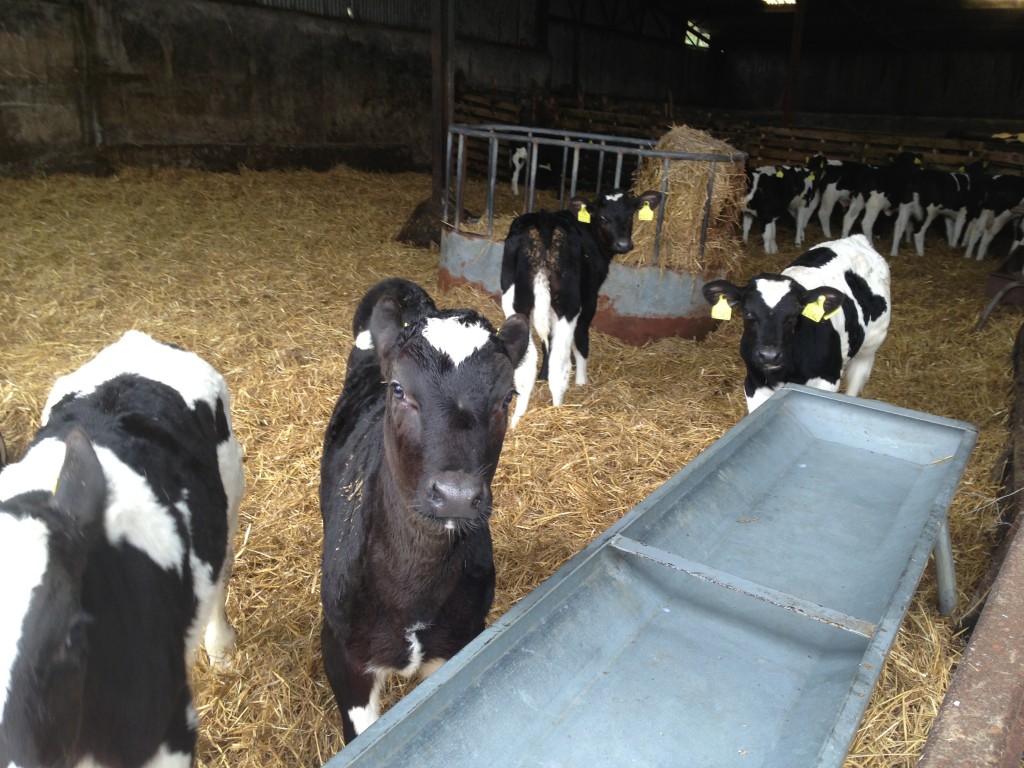 We are still indoors too. ?Most of the calves from our shed were put into a big loose shed a couple of weeks ago. Even though I am one of the oldest, the farmer left me ?in this shed for a little longer because I had a dodgy tummy for a few days and he wanted me to be stronger. ?It’s quite a dangerous dose and can kill humans and calves. The farmerette brought some samples into the vet lab and one sample had crypto which can be transmitted to humans as well as other animals. All of the other calves in my pen went to the other shed so I was a little bit lonely for a few days but a calf called Gloria joined me and we made friends.

We had a new calf called Clive come into our shed, he had been poorly and as he was the smallest in a pen of six calves with the other five all being very tall and strong, he almost didn’t have the energy to get better as they were so boisterous so the farmer brought him up to our shed and he is in a pen on his own. After only half a day, he started skipping around as he was enjoying not having to battle to reach his bucket of milk and he could drink it as slowly as he liked knowing there wasn’t another calf beside him waiting to push him aside and drink the rest of it. ?The farmer says he has ‘turned himself inside out’ which means he is glowing with health now. 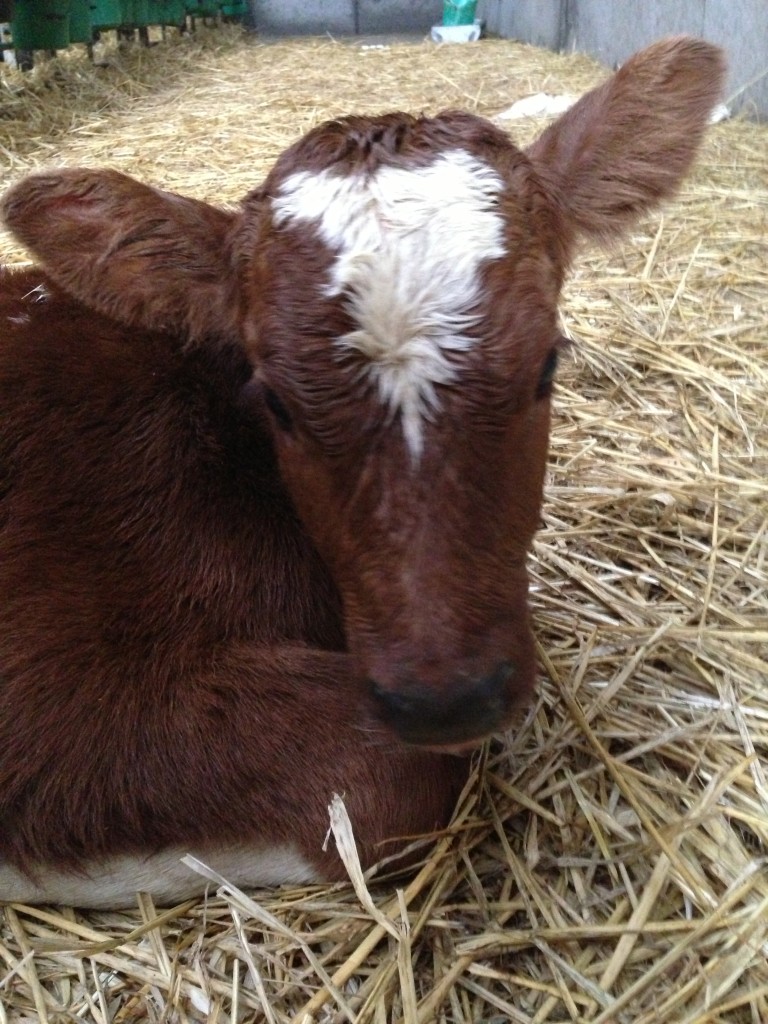 There have been some really pretty calves born too. Florence has a touch of the bull Oman in her and her colouring is sort of splodged with dappled dots. 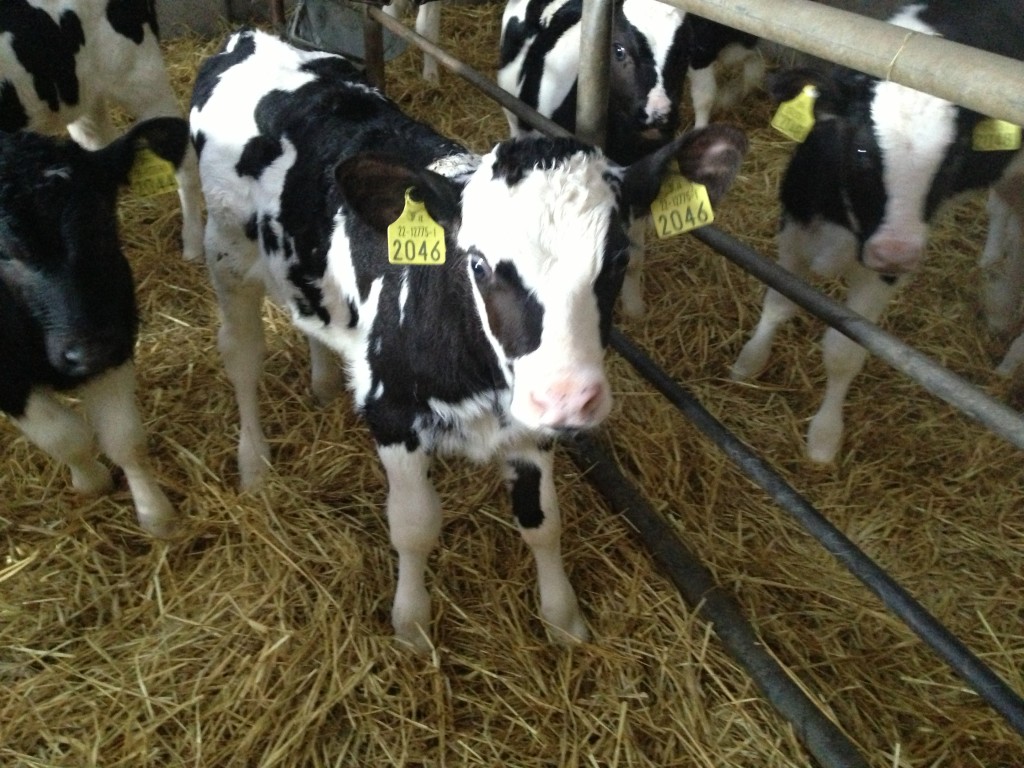 Rua is a dark red colour and really pretty. The farmerette says she reminds her of her daughter – red haired, fiesty on the outside if anyone tries to outdo her but very kind and caring on the inside. All of these photos were taken when they were a few days old. 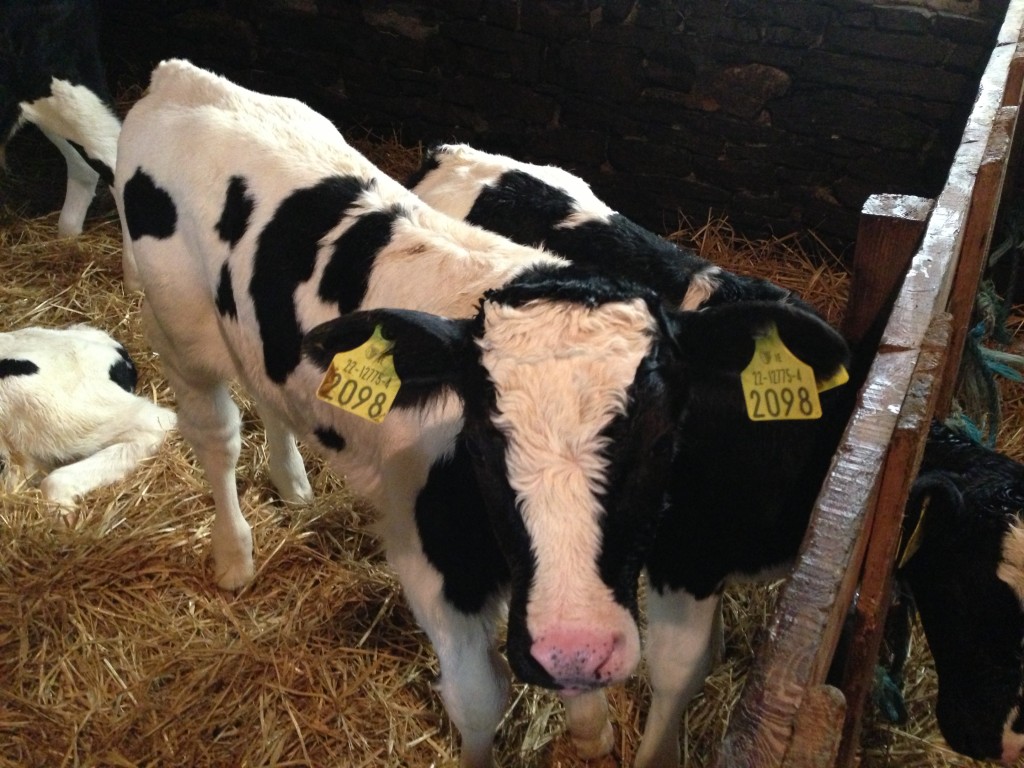 Charlie is the biggest calf in the herd. There were a few very big calves born this year and apparently this is happening on lots of farms, probably due to the good quality silage made last year during the hot summer. ?The farmer couldn’t believe how quickly Charlie was up and looking for food – almost within seconds. ?The standard calf sized feed just wasn’t enough for Charlie and they had to give him extra milk. The farmerette says she is glad they will be castrating the males now as she wouldn’t like to face Charlie as a two year old bull as he is pretty boisterous already.

We’ve been kept entertained by a crow the last few days. One crow has been trying to build a nest along a rafter near our roof, it is right over the passageway. However, the twigs won’t stay in place and the passage floor is covered with tons of little twigs and small branches. She just isn’t realising that it’s not working for her and keeps getting twigs, pushing them through and wondering where they are going as they fall to the floor. I wonder how long it will take her to realise that it might be a good idea to find another spot for her nest.

Daisy and Jack are being renamed Houdinis! Daisy is the most intelligent and works out how to get out of the pen but Jack takes about 3 hours longer! Even when they are given fresh grass, they stick their heads out through the wire believing that the grass is greener on the other side. 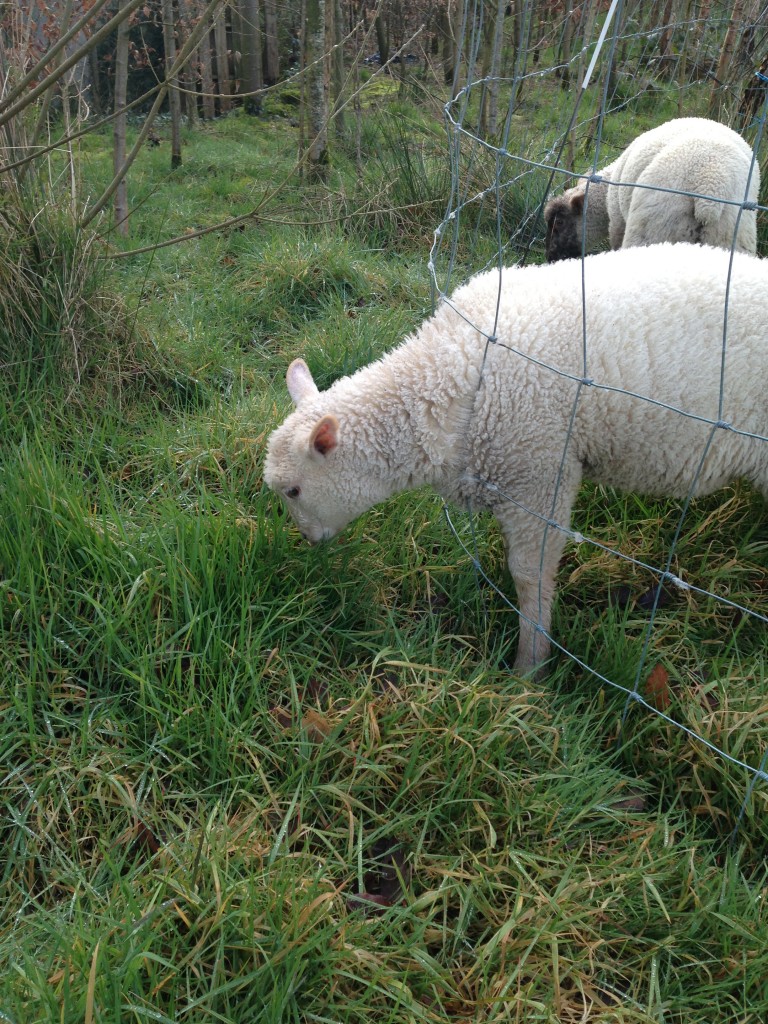 The farmerette changed their pen the other day so they had fresh grass and she thought they were secure but she came back from the bank to see Jack still in the fenced area but Daisy was lying down outside – in the area she had done her best to escape from for the previous 4 days! Once the two of them get out, they roam everywhere, and if the farmerette is feeding the calves, they even follow her in to check she is doing it right. ?I had never seen a lamb before and got a surprise when they arrived in to us too. ?We heard lots of flapping of wings and clucking one morning and they had jumped into the henhouse as the eggs were being collected. The hens all flew up to their roost pretty quickly.

It was cold for a few evenings and as the lambs didn’t have much shelter they were put back inside into their straw bedded pen each night. They like going to bed in there again now every evening – it is like they get tired and have enough of being outside, they get a bottle of milk and they settle down for the night, all cosy and warm. 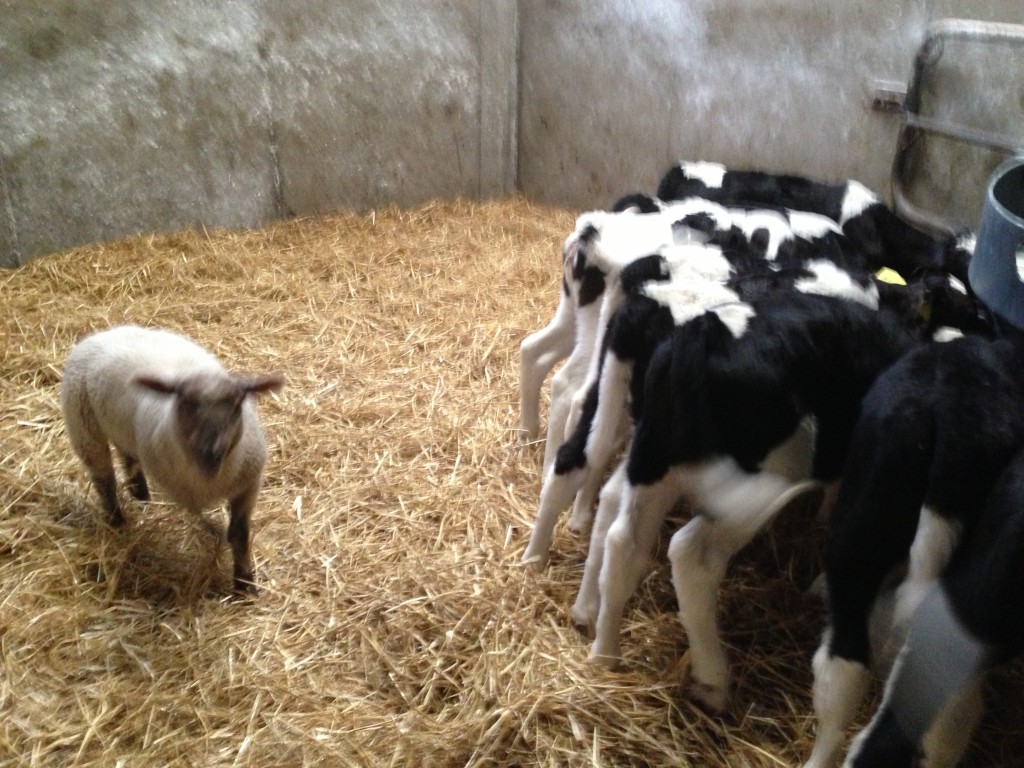 This is the mini farmer that brings us meal at the weekends and some evenings too. He has a lovely smile and is a nice kind boy. 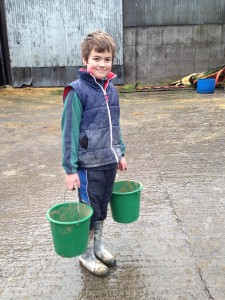 I’m going to be moved to the big shed tomorrow or Tuesday, I’m looking forward to seeing my old friends again and meeting some new ones too. I hope Guinevere and I are in the same large pen. I will let you know next time!

One thought on “Maggie Moo – a Spring Update From Garrendenny Farm”