The book is out! There were 1000 books in my hall on Friday. There are still almost 1000 books in my hallway but about 150 of them have been packaged up with about the same number to do tomorrow. Yes, I’ve had pre-orders of about 300 books, 225 in the crowdfunding and orders for about 70 in the last week. 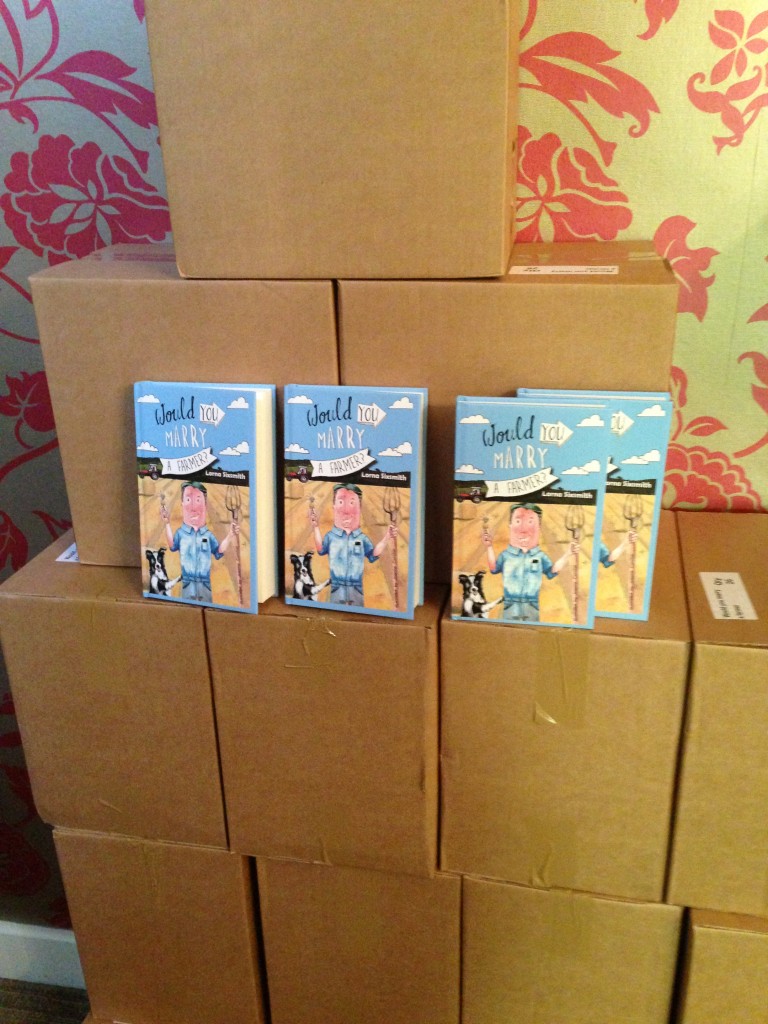 As it is a self published book, the pressure was on. Were there going to be many errors in it? As it got towards the end of the editing, I have to admit I was envious of writers who can hand over their editing and formatting to the publishers as apart from the pressure, I was sick of the sight of it yet I could understand how people can keep editing and editing, changing bits here and there if they don’t have a tight deadline. I couldn’t see the humour in it any more and as the deadline loomed and I was burning the candle at either end, I was glad to be finished. ?There was one rather large error I spotted but it can be sorted – the barcode with the ISBN number wasn’t put on the back cover. Initially I nearly died but the printer said he could send stickers and okay, it will make it more obvious that it is a self published book but I’ve no problems with self publishing so I’m not going to get stressed over it. 5 minutes later and I was relaxed again.

I’m pleased with it – the illustrations by Joanne look brilliant. I love the front cover and I hope people like the fact that it has a hard cover. I left it down to my dad at 1:45 and he scarcely didn’t leave it out of his hand until he finished it at 6:45 – he said he enjoyed it anyway!

Now the work starts apparently. Many authors will tell you that writing the book is the easy part – it is the telling sufficient numbers of ?people about it and persuading them to buy it that is the challenge. There’s a lot of competition out there in the book buying world. ?I wrote a post last Saturday entitled ‘Ten reasons to marry a farmer‘, hoping it would promote the book a little. I was incredulous to see the number of facebook shares it received – with the post receiving just short of 50,000 views in the 7 days.

Did that translate into lots of sales? No, not really but after all, people were coming to read a blog post, not to buy a book but it will have helped with brand awareness. Irish Central reposted it on their site (with my permission and included a link to my product page) and although I don’t know how much traffic they received, I was able to see the response to it on facebook on the Irish Central and WorldIrish pages and the number of total shares was over 200.. ?I saw that broadsheet.ie were looking for suggestions for Irish stocking fillers and I sent them a link, they had included it in a gift guide within a couple of hours. ?Press releases have been sent although I still have more work to do on publicity.

Then there are the reviews – what if people hate it? Well, realistically, not everyone is going to like it – that is life. Some will like most of it but might disagree with some bits. Others might love the humour and not enjoy the historical bits as much. I’m more intrigued than anything to see what people think – will it be like Marmite? Will they love it or hate it?

I’ve arranged a virtual blog tour for next week with 5 lovely bloggers reviewing it (one each day) over the 5 days.

Liam from Got Ireland kicks off the reviews on Monday. ?Liam wrote about my crowdfunding campaign back in July, he writes an excellent blog about Ireland – extolling its beauties as well as the more practical points about visiting Ireland and his blog was a finalist in the recent blog awards. ?I’m intrigued to see what he thinks of it.

Dee from Greenside Up writes a great blog about sustainable living and vegetable growing and she is very much in tune with the beautiful Irish countryside yet writes with a poetic realism (in my opinion!) . Dee and I first met over ten years ago, I had started going to a toddler group with my eldest to try and get to know some people and Dee was pregnant with her youngest at the time. Little did we know then that we’d both end up addicted to blogging! Dee won ‘Best Overall Blog’ in the blog awards this year and do visit her blog on Tuesday to see what she says about the book.

Derbhile edited my book and is a published author. ?She runs a excellent writers group on LinkedIn too – where writers really do share tips honestly and offer each other support – I find it brilliant. Derbhile interviewed me about the crowdfunding and self publishing process and I’m sure she will add in her tuppence worth about the book too. Check out her post on Wednesday.

Muddy Matches is on online dating site for those living in Ireland and the UK – designed for those looking for partners who live the muddy boots rural lifestyle. I’m really intrigued to see what they will think of the mood from an ‘online dating’ plus ‘dating/marrying a farmer’ perspective. Tune into their blog on Thursday to see what they think.

Next up is the wonderful Irish American Mom, Mairead, who has been living in America for many years but frequently returns on holidays – no mean feat with 4 young children. Mairead is a writer too as well as a blogger and a good cook, with lots of scrummy recipes. Her blog won the Gold Award for Best Expat blog in 2012 – what ?a talented group of bloggers I have connected with. What will Mairead think? You’ll have to check out her post on Friday to find out.

Last but not list is Rich Rennicks who often reviews books on his blog?A Trip To Ireland – always well written and astute, I’m really intrigued to see what Rich is going to say. ?His review will be up on the Monday so there’s 6 bloggers on the virtual book tour.

Some of the bloggers will be holding competitions for the book too – so do have a go. All the prizes will be posted to any address in the world so there’s nothing to stop you. No tricky terms and conditions.

The virtual launch on facebook will be the week after – I am going to opt for Friday 13th! Maybe people will prefer to stay in the safety of their own home and come to a virtual launch than venture out of doors on the 13th. I need to think of some games and get some prizes and some other surprises organised and then I will announce the times.

Update for the Farm

For a farming blog, I’ve been a bit abysmal re writing about what is going on on the farm! ?It’s just as well this book is well and truly out of the way before the calving starts or it would never have been finished. 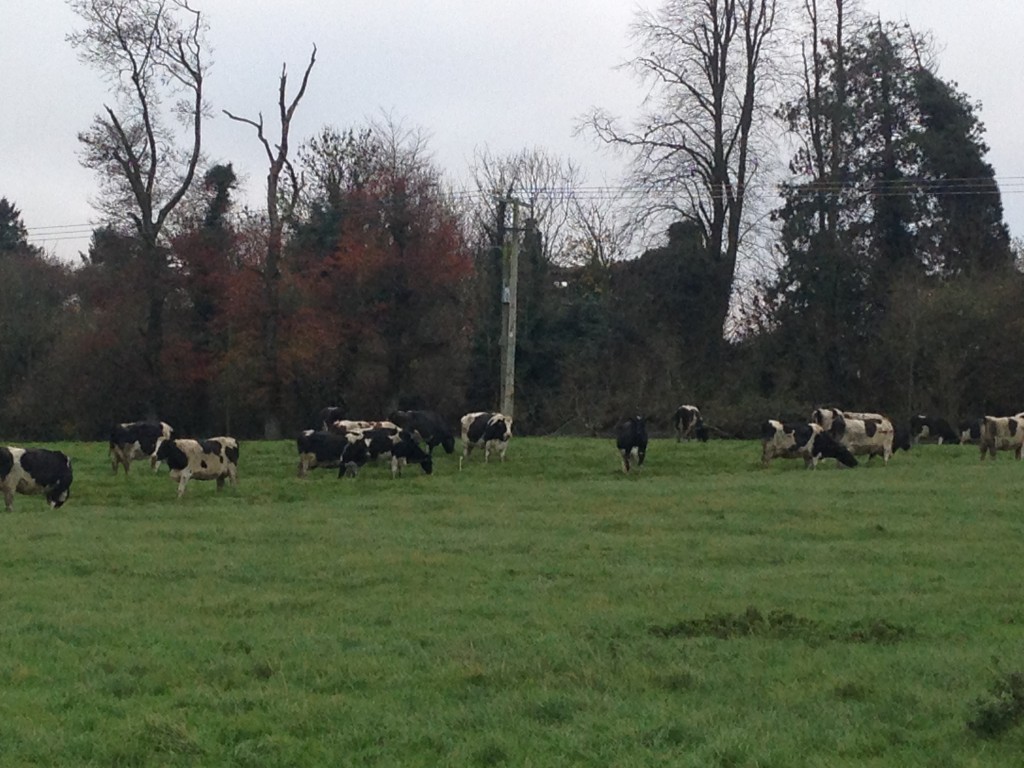 Cows with the ruined Garrendenny Castle in the background

The cows have been in at night for a few weeks but have been out by day until today. ?They will be milked once a day for a couple of days and the plan is to dry them off on Tuesday. ‘Drying off’ means that they have a rest from giving milk for the 6-8 weeks before they calve. ?There are calves out at grass still and they will be housed over the coming week. It has been great to have animals out for the whole of November. ?Once they are all in, work revolves around feeding, cleaning out and repair work around the farm. There’s lots to be done in the house too – I have no idea how I’m going to get it all done in the 7 weeks before calving starts again but I will be downing tools for a week over Christmas to relax, read, and sleep.

There’s been lots of talk about how farmers will expand their milk production when milk quotas are abolished in 2015 (at the moment, we can only supply a certain amount, if we exceed that and the country goes over, we would be fined substantially on the over production amount. It’s easier said that done to work it out as if weather conditions are good and grass is good, cows will give more milk.) ?Brian Costello wrote an excellent article for Agriland.ie last week where he pointed out that milk quota has never been a problem in the West, many farmers have expanded and while many did it well, some invested too much and went out of business when times got tough. ?There’s a lesson there for us all and it was reiterated at the Moorepark open day too – creating more milk doesn’t necessarily mean more income. ?If we were to increase significantly with cow numbers, we would need more housing and a better milking parlour. Our farm is fragmented so although we have the landbase for more cows, it’s not possible to get them to graze the grass that is nearly 2 miles away. ?We will increase somewhat but we have to keep it manageable. What we have been working on is improving the herd and the quality of the milk through breeding and better grass management. The protein in the milk has improved by 0.3% over the ten years. 0.3% doesn’t sound a lot does it but when you think that every 0.1% gives us another ?3,500 (based on this year’s milk prices), that’s ?10,500 extra income this year without having to feed any extra cows.

I had planned to make clotted cream and butter before the cows go dry but as I’m sitting here surrounded by boxes and a messy house (with a journalist coming tomorrow), I think I had better prioritise!

If you would like to buy the book – you can do so here 🙂 ?It would make a great Xmas gift for any woman dating, engaged or married to a farmer not to mention a great proposal prop for a farmer looking for get married too. ?I have a Stockist page too – with a few stockists listed if you would like to see if there is one near you.

2 thoughts on “Update on ‘Marry A Farmer’, Virtual Tour and Getting The Farm Ready For Winter”