Apparently some farmers are deliberately not getting married because they fear a prospective wife may divorce them and take half the farm. Parents aren’t handing over the farm to their son in case their daughter-in-law gets half the farm in the divorce courts. Caitriona Murphy was recently awarded a journalist award for her discussion of pre-nuptial agreements in a series of articles for the Irish Independent. The latest news is that the IFA have called for pre-nuptial agreements to become law so they have a legal status if the worst comes to the worst. It is advised that both parties have separate legal advice before the wedding and it form a part of each person’s future wealth planning in one way.

However, there’s a not-so-serious side to pre-nuptial agreements too – and if these were adhered to, maybe the divorce courts wouldn’t be needed at all. I have a few more in my book in the ‘How To Stay Married’ section but here’s eight suggestions for a pre-nuptial agreement. 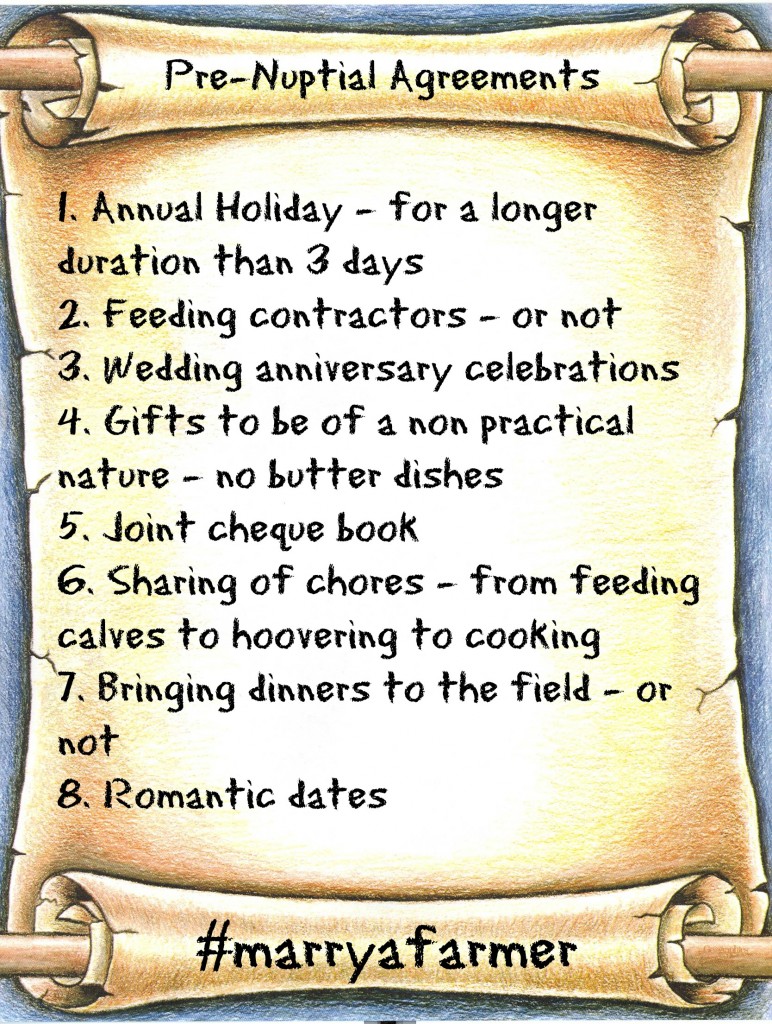 Getting farmers away for a romantic night out or an annual holiday away can be easier said than done – do get that one in writing! Get married at a quiet time of the year to maximise anniversary celebrations for all of your married life. We were discussing birthday and anniversary gifts from boyfriends and husbands when I was with a group of women in Wales this week (from farmers and non farmers) and chip pans, butter dishes and teapots featured – maybe non practical gift agreements would be a good agreement to make too!

Why the need fora joint bank account? Traditionally many farmers kept tight hold of the bank account and the cheque book – the farming wife probably wasn’t working (partly due to marriage bar too) and her only access to money would have been what was given to her for the housekeeping and her own ‘pin money’ from selling eggs. The co-operative was originally very unpopular amongst women who would have been the ones milking the cows -why? Because instead of getting the money directly to themselves for the milk, they were then paid by milk cheque which went to the male farmer. It may sound like something that happened generations ago but it still happens – with people my age! Heard recently of a woman who has to ask her husband for permission before taking money out of their joint account. Now, I would have him buried under the patio so a pre-nuptial agreement might be preferable – if only for the farmer’s sake.

Would you add any more?