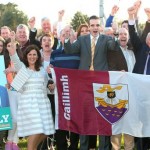 I haven’t written a post on the IFA (Irish Farmers Association) since January, I had intended writing one before the election last week but April is turning out to be one of those ridiculously busy months (throw transferring to a company, visitors, bad weather and a double confirmation into an already busy time and you get the picture – just don’t mention book number 3 for a few days!). That post would have wished the candidates well and spelled out my hopes for what the new President and Deputy President would achieve in forming a New IFA. If you remember my previous posts, you’ll know we didn’t renew our membership in November. I joined the IFA again in March, I decided to give them the benefit of the doubt, that I would use my vote and wish them well in going forward.

If you’re wondering what the IFA did that was so terrible, I’ll provide a quick recap. Last November, there was one scandal after another over the course of a week as revelations came out. The General Secretary had been paid €1m over two years. Jer Bergin, the current treasurer, was the only treasurer in years to not sign on his bonus (or Smith would have got even more). The IFA always fudged the question as to whether the President received a salary or not. It emerged that not only did the President receive a salary of €140,000 but he also got directors fees of about €52,000. We then heard that the President agreed a payoff of €2m to the General Secretary. And if I remember rightly, the last scandal of the week was we heard the news that each President received a nice golden handshake of an extra year’s salary as a thank you for his four years of service. As one journalist tweeted “the IFA just keeps on giving” as the news just kept breaking and provided them with news at an otherwise quiet time of year. The President resigned (he claimed he was pushed under a metaphorical bus) and it was agreed eventually that an election would be called. Con Lucey published his report but it only went back to 2009. Farmers still don’t know when these high salaries started nor how their funds were spent. Berkery, the previous General Secretary, claims the IFA would be breaking confidentiality clauses if it were revealed. The Irish were always great at supporting the underdog, or the person who got one up on the ‘big guy’ and that was fine when that person was John Bull (England, the Empire) and Ireland was struggling for independence. However, the IFA cheated their own. 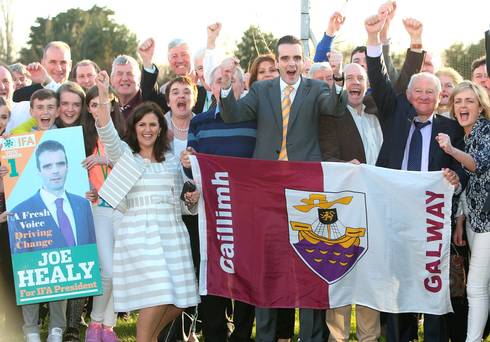 I was invited to go on the RTE Prime Time panel last November and although I baulked at first, I said yes. I was furious that farmers loyal to the IFA had been betrayed in such a way. I rarely attended meetings or protests and yet I felt like my money had been stolen, I could only imagine how distraught some farmers were going to feel. My daughter said “Mum, I’ve never ever seen you look so mad, you looked like you wanted to kill”. Well, maybe that was a slight exaggeration but there are farmers who have trusted the IFA to represent their interests, they have paid fees and levies to the IFA, they have attended meetings and protests, they have given up their time to help others and a few with their hands in the greasy till betrayed them. Orwell’s Animal Farm could have been written for the IFA. It could be argued Boxer represents those county chairs who worked hard to help farmers in their communities while that line at the end where the creatures looking in the window looked “pig to man, and from man to pig, and from pig to man again; but already it was impossible to say which was which” shows how those at the top had become far removed from the reality of farming life – so much for their slogan ‘no one works harder for farmers”.

The signs for a New IFA were reasonably good. It is clear that voters wanted change as Joe Healy won by a large majority. (If anyone is wondering, I voted for Henry Burns, I felt we needed some experience plus I felt he was the strongest candidate with the most presence at the meeting I attended but that’s not to take from Joe Healy’s success, I wish him well and really hope he can turn the IFA around.)

The alarm bells started ringing last Thursday morning when Morning Ireland read out a line from the editorial in the Farmers Journal “Farmers need to ask a simple question: do they feel their interests will be best served by continuing to rake over the coals or getting behind the incoming IFA leadership”. Now, to be fair to McCarthy, he does make some good points such as the need to bring in independent expertise and that the IFA needs to reinstate credibility by defending farm incomes (as a matter of interest, why is the language always so passive – why “defend”, why not “improve” or “grow” or “increase”?). However, how on earth the IFA expects to regain credibility and trust by not investigating the past is beyond me. Shouldn’t we learn from history to ensure these mistakes don’t happen again. Were all those promises in November mere hot air then? Now, if you’re wondering why on earth an editorial in a paper might reflect the future of a farming organisation, I think most farmers would share my opinion that the IFJ and IFA are pretty close, not just because they share the same building. Let’s just say that journalists from other farming papers seemed as surprised, indignant and shocked as the rest of us back in November. I’m sure a student will analyse the difference in the November reporting from the various newspapers at some stage in the future.

Some time ago, Agriland reported that Tom Clinton (a past President) wanted all the past dealings done and dusted by 30th June and he doesn’t want to hear anything more about it after that. I thought two months was a pretty short time frame and I was going to give new leader three! Healy did say at hustings meetings that he wants things to be brought into the open, that he doesn’t want new revelations to come out unexpectedly in 6 or 12 months time. And he’s right – more scandals would finish the IFA for good. At the moment, we have heard that the IFA made a saving when Smith took over from Berkery and yes, you’d expect someone with over two decades of experience in the job to be earning more than a new person to the role but it does raise the question – just how much was Berkery getting (not to mention others)? People were thinking that Smith’s payoff might be €500K but then to hear it was €2M, shows the monopoly money attitude held by people in high places.

Yes, Healy has to concentrate on the matters in hand at the moment and I don’t envy his task one bit. At least cows can only kick you! As Ann Fitzgerald mentions in her column in the Independent, investigating the past might open up another can of worms or it might not be as bad as we imagine. Whatever it is, I think farmers would accept the truth, we’ll rant and we’ll rave and then farmers will put it behind them. Heaven help Healy if it isn’t investigated now and something comes out in a couple of years. The IFA will be finished and that means farmers will have lost their main farming organisation.

The more we, as farmers, are told to move on from the past, the more it convinces me that there are many skeletons banging on that closet door of the Farm Centre to get out. There were plenty of men hiring people like themselves, massaging each other’s egos, patting each other on the back and mutually deciding on each other’s salaries (and yes, you can put Brian’s expression in here again too). That old convenient chestnut of “if we don’t pay the best top dollar, they will go elsewhere” is being rolled now for Ornua now too with 9 executives sharing €9m over the last two years. To borrow another expression from Animal Farm “All animals are equal but some are more equal than others” clearly seems to be the new Irish mantra.

Tom Clinton asked IFA members to support their President for the next two years. I’ll be reviewing my membership next March. I hope I’m proved wrong and if I am, I’ll be the first to hold up my hands and say that the IFA has got my trust and my respect again in representing farmers and providing us with a organisation in which we can unite and be stronger. I wish Joe Healy well in implementing the changes recommended in the Lucey report and more. His inaugural speech sounds promising so here’s hoping (although I don’t see any plans if Brexit happens but maybe that’s for another day). As Fitzgerald said in her column, “you only feel anger about something you care about. Of far greater concern is apathy.” I’m still pretty cross!

Incidentally, county chairs meet today for an AGM. All the chairs are men but I don’t think it would do the New IFA any harm to change that section on their website from ‘county chairmen’ to ‘county chairs’. Enough said!

2 thoughts on “A New IFA or More Of The Old”