It’s AI season here on the farm at the moment, started on 1st May. ?We use about 95% artificial insemination for our cows, just using a bull for some repeats (when a cow doesn’t go in calf on the first serving) if it is getting late in the season. ?It is entirely possible for a cow to have many calves and still be theoretically a virgin! 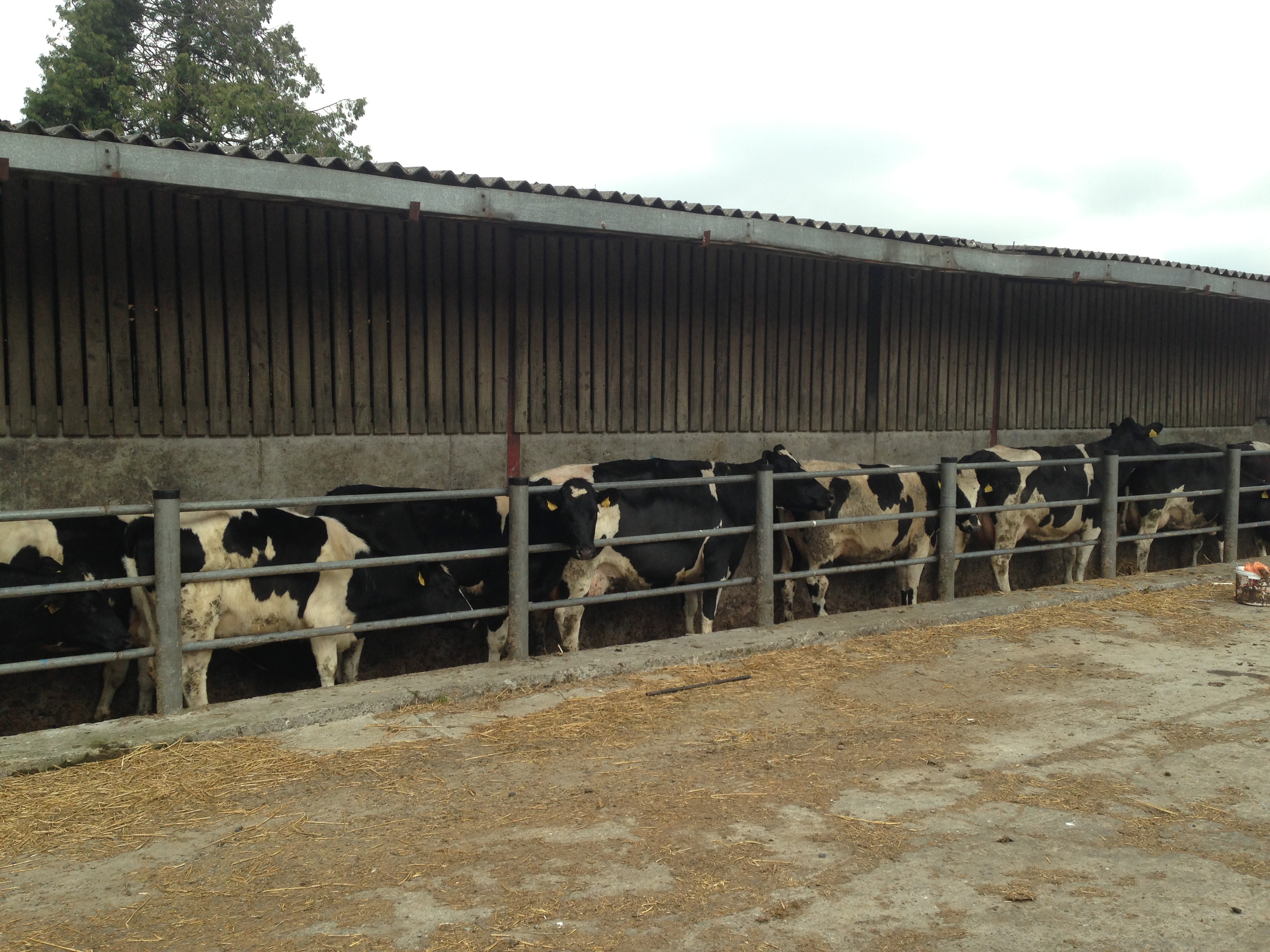 It’s always a big decision to decide which bulls to use – they are scored according to criteria such as milk, fertility, milk solids, calving interval, beef and ease of calving. We always use easy calving bulls on heifers for example.

The cows and heifers have to be monitored at the moment to check if they are in heat. Part of this is for financial reasons – the delay of a month in the birth of a calf can be ?200 – this is due to loss of revenue for milk produced from the cow during the month and missing the month of thrive in the calf. Heifer calves have to be a recommended weight (330kg for a British friesien) at about a year old when they are being AI’ed to go in calf and bull calves will be going to the factory so the better the thrive, the better return. A late calf seems to take forever to catch up. ?We also try to have a tight compact calving season – this year was almost too compact in that there seemed to be newborn calves absolutely everywhere for a week or two! The gestation is roughly 9 months so the first calves should be born around 1st February though some will always arrive early. We’d a lot of early calves with one particular AI bull this year which made the compact calving even busier!

When my son was about 5 and he used to see the AI man driving up the yard, he would say in a very ‘I know it all’ tone to his little sister “That’s the AI man and he’s going to put a seed into a cow which will grow into a calf”. I just knew he was picturing an apple seed!

There’s different methods for checking if a cow is on heat (they come on heat every 3 weeks if they’re not pregnant and all else is well). Many farmers will use paint on the ‘top tail’ area (called tailpaint) as cows on heat will jump on each other so if you’re a non farmer and you see cows with bright blue or red paint on their rumps, that’s the reason why! The paint will wear off if the cow is on heat (by being jumped on by other cows coming on heat). 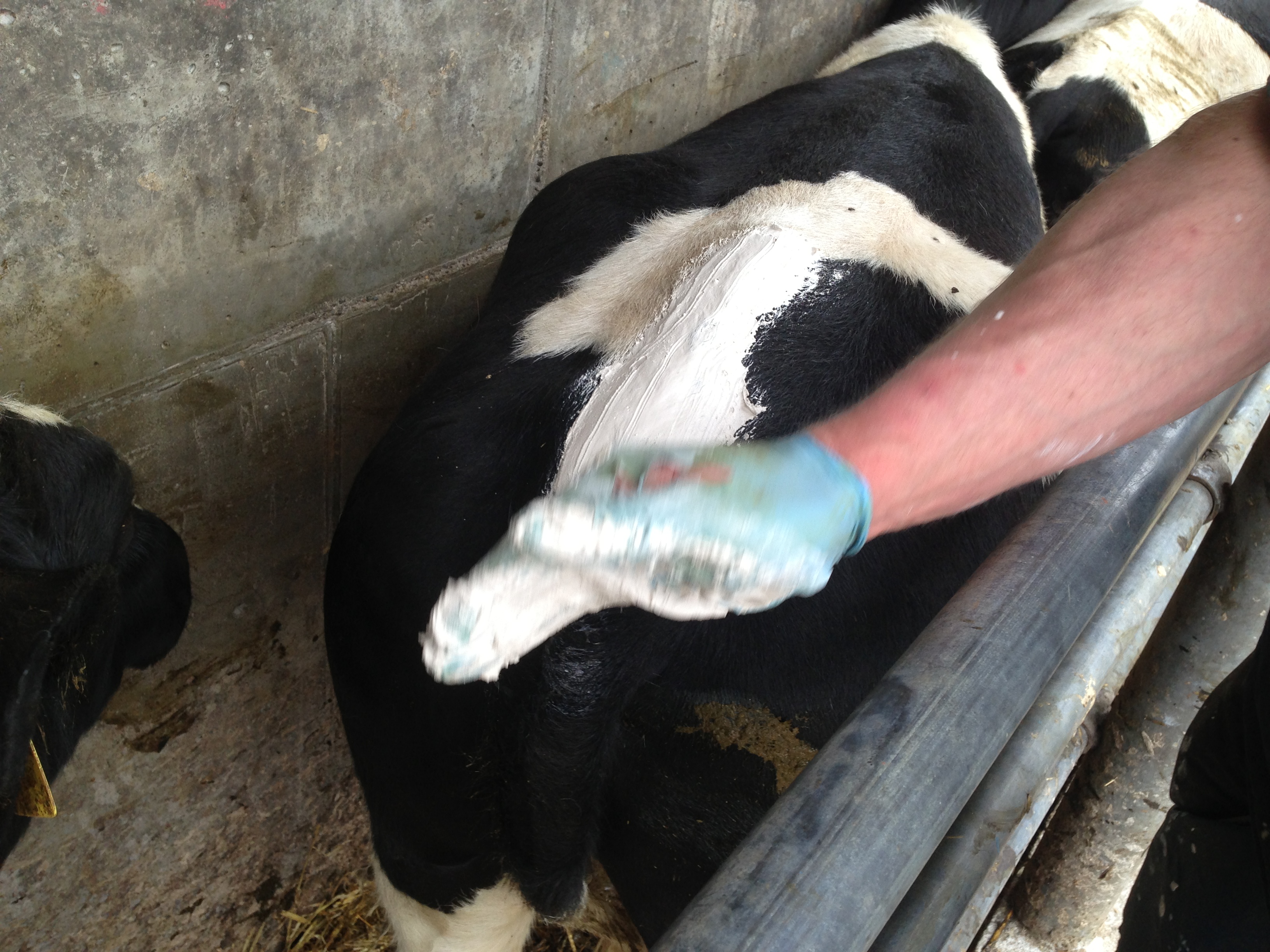 I’ll be honest – I’m useless at detecting if a cow is on heat, I have to see them jumping or standing while being jumped on in order to tell. Brian, on the other hand, doesn’t even use tailpaint with the cows, he knows them so well he can tell if their behaviour is affected such as if their ears are twitching, if their senses are more alert, that kind of thing. He did tailpaint the heifers this year – our AI technican recommended using lime mixed with water into a paste rather than ordinary paint. It works to a point.

Our submission rate for cows last year was 98% in first 3 weeks (this means that 98% of the cows were detected in heat and served with AI in the first 3 weeks of the AI season – cows go in heat every 3 weeks) with a conception rate of 72% which is considered good. Submission rate for heifers was also 98% with conception rate being 84%. Heifers tend to go in calf easier than cows – I guess increasing age doesn’t just affect humans!! There would be a higher conception rate to natural service ie a bull but AI is used frequently as it provides improved breeding.

Now for the vine video with the demonstration for AI.

See a Cow being fertilised with AI straws vine.co/v/b2Kz9qwWdAH

It’s actually quite a delicate operation actually. The technican puts his left arm into the rectum so he can feel the ‘straw’ implement as it goes in and ensures it is in the right place before the semen is released. If it pushes in too far, it can kill the cow!

The first 50 days of pregnancy are very important in terms of energy balance with her diet and this is also why publications such as the Farmers Journal have been emphasising the importance of ensuring cows were in good fettle for going in calf – diet is so important.

If you are wondering how to embed a vine video into your own blog post by the way, I have instructions on my Write on Track blog here for it.

And for a totally different change of topic – I’m closing down my online accessories store at Garrendenny Lane and the final day is Friday so do pop over to see if there’s a bargain that catches your eye. There’s some lovely things for Christmas or wedding gifts if you want to be organised! 🙂

4 thoughts on “AI on an Irish Dairy Farm”