I bought Sinead Crowley’s first book, a crime thriller, Can Anybody Help Me? on kindle when it first came out. It was on offer for ?1.50 for a short period so I snapped it up. I still prefer reading the physical book but considering it was ?14.99, it seemed like a no brainer to buy it on kindle. Funnily enough though, it then took me a while to get around to reading it but then I flew through it. 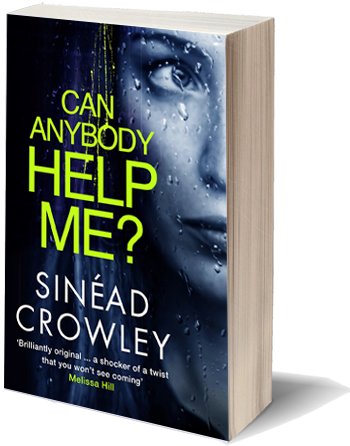 Set in Ireland, the main detective is female, married and pregnant which makes it quite different to the hardened, separated or divorced, ex-alcoholic, heavy smoking, dealing with demons, male detective of many crime novels. ?Young mothers are disappearing, discovered murdered or suspected of having committed suicide. No one is making the connection between the murdered women (apart from one mother) as they are all members of the NetMammy forum and only know each other by the usernames they use on the forum. ?Who is the murderer? Will he be caught in time before a particular young mother is murdered, she seems to be moving closer to the clues which puts her in more danger. Will the detective and her unborn baby remain unharmed?

There are surprises, you will keep turning the pages, you will probably be surprised when the murderer is eventually revealed – I was.

I was surprised though by the slightly chick lit feel to the novel. The front cover suggests that it is going to be rather horrific and brutal with the dark colour and the rain drops contrasting with the yellow font, and yes, it is in many ways. But the language and the pace aren’t as gritty or as fast paced as other crime novels. ?Excerpts from the NetMammy conversations on the forum were placed at the start of most chapters and the constant LOLs ‘kinda wrecked my head’! ?I discovered I can’t skim read as quickly on my tablet as on the printed page as I just wanted to skim these to get the gist of them. It is a long time since I last logged into Rollercoaster but I actually did log in as I was wondering if other women did constantly talk like that online. I didn’t find as many LOLs as I feared thank goodness! ?I’m not the kind of person to chat at length about the feeding of babies, dirty nappies, grumble about husbands and other domestic’ stuff’ which is why the excerpt irritated me a bit. If I was to use a forum, I’d go on, ask a question, find an answer and go again but I could see that the forum was used in just the way Crowley described.

What the book does show though is that our online personas are perhaps not as secure and secretive as we think they are. It also shows that all is not as it seems and that the people we chat to online in various forums may not be as they seem and can even be dangerous. We warn children and teenagers of such things but we may forget about it for your own safety. Meeting another mum offline for the first time may seem harmless but as shown in this novel, it just might be a murderer!

I can see this being made into an Irish crime drama for RTE – maybe even in three or four parts and I do think it would be excellent – as long as the LOLs are limited! 😉

2 thoughts on “Book Review: Can Anybody Help Me? by Sinead Crowley”