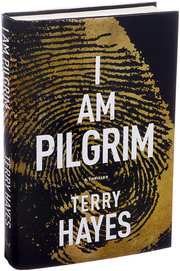 ?is a brilliant thriller so I couldn’t resist it when I spotted it recently in a bookshop even though I’d promised myself that, due to the ridiculous number of unread books on my bookshelves, I wasn’t going to buy any more books until Christmas. Having had a busy week at the Ploughing last week and with a busy week coming up for the blog awards, I decided to treat myself this weekend and give myself enough time to read the 880 pages, hoping to finish it by Sunday evening. I finished it at lunchtime today, I just couldn’t put it down yesterday despite the fact that the weather was so nice and I spent a few hours outside finishing off the painting on the house.

It has a brilliant plot, occasionally the grammar will stop you and make you need to reread the sentence but in a book this good, I’d forgive a lot. Telling the story of a man who is intent on destroying America and another man’s struggle to prevent him, it’s a complex and tightly woven novel. The Saracen’s father was beheaded when he was 14, tortured and beheaded for speaking out against the Saudi royal family. Highly intelligent and realising that revenge wouldn’t happen overnight, he set out on a long journey to destroy the ‘far enemy’ (America) so that it would destroy the ‘near enemy’. ?The revenge was going to be in the form of tampered vaccines whereby the highly infectious smallpox would kill thousands and millions of Americans. Given what is happening with Ebola at the moment and the attempts to quarantine huge areas, it perhaps isn’t as farfetched as it might seem. His cruelty and determinations is revealed in his extreme planning deliberate infectation of three victims who all die tortured deaths. ?The author also seemed to suspect that he would be accused of it being farfetched and provided ‘evidence’ of similar events in history e.g. one example of torture towards the end of the book was cited as being used in Japanese war camps in WW2.

The only person who can stop him is Scott, adopted child of extremely wealthy parents but who has dissociated himself from all past friends and family. Having proved himself already to be a brilliant agent, he was attempting to leave that life when he was invited along to a bizarre murder scene. A woman has been murdered in an apartment and there are no clues as to her identity ?- her body has been burnt by acid, her teeth have been removed, and other steps have been taken to ensure her identity will never be discovered. All of these ‘methods’ were copied from Scott’s book (written under a pseudonym) which provides the reason for his future investigation.

What ties this murder with a man’s eyes being removed from his live body, with the attempt to stop the Saracen sending 10,000 vials of biological warfare to America? ?It’s complex and it will suck you in. Written in the first person narrative, the character of Scott keeps you on side, it feels as though he is confiding in you, telling you a story, revealing mistakes he made, and making us turn the pages to see how each mistake affects the progress of the investigation.

The books seems to be well researched, there may be glaring errors that someone more knowledgeable about Islam, Saudi Arabia and Turkey will spot but it seems to be expertly researched, it felt as though Terry Hayes had visited all of those locations as they are described with such depth. The extent of torture used is something that I don’t like to think about, I cringe if I even hear of an animal being mistreated but to hear of people being tortured so they beg for death is something else. ?Scott is a likeable person and what makes him even more likeable is the fact that he can’t stomach watching people being tortured, even though he is responsible for killing traitors to the US. His colleague The Whisperer knows he will break under torture and advises him to leave this world before it gets to that stage – this really adds to the tension towards the end of the book.

If you are looking for a good spy thriller, pick up a copy of I Am Pilgrim