It’s not often a farmer whoops with joy and pleasure. Farmers, although optimistic by nature (they’d have to be to survive in this occupation) never let on to others that they are pleased or happy, perhaps they know that one good day may be followed by a bad one and it’s never good to get too carried away. 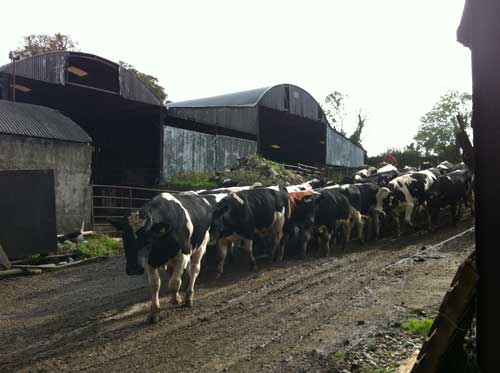 The cheque arrived yesterday for 16 bulls that went to the factory on Monday and I’m now sorry we didn’t take a photo of them before they went. ?As you can see above, they looked a tad scrawny when they were being put into the sheds in early autumn. Brian admitted he was pleased with their performance (he’d want to be – they ate loads of meal and were very comfortable ?in the new shed!) but sometimes trying to fatten Friesien (dairy) animals can be an unrewarding task, they just don’t thrive like beef animals would. We always tease our children that W is like a scrawny Holstein (and doesn’t eat much anyway) and K would make a prime beef animal (she loves protein and grows in front of our eyes)! 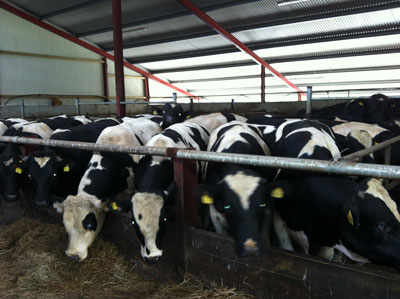 This is our second year to fatten animals as bulls, before that, they would have been castrated as calves and fattened as steers. Having bulls means more work in the sense of having excellent fencing, being extremely careful with the increased risks but they thrive better and can be despatched to the factory at a younger age. A good dog is invaluable too, ours has got to the stage that he finds bringing in the cows boring but he loves working with the bulls, seeing them as a challenge and he is always ‘on the ball’ when they are around.

Our cattle usually score O’s or R’s. (Scoring system is P = poor, O = ok, R = middle, U = good, E = v good with more money being paid per kilo the better the grading). The 16 all scored as R’s with one U! We’ve never had a 100% friesien score as a U before and even with the Angus bull years ago, they were few and far between. ?A half-brother (same mother) of the bull that went to ?Dovea last year was used to father a few calves late in the season and he threw wonderful sons.

The average weight was 40 kg (deadweight) above last year’s which is worth about ?180 per animal. Just a shame that meal prices went up so high in the last year especially as the price per kilo of beef hasn’t increased at all in line with the meal prices.

Having said that, the farmer was smiling which makes it all worthwhile 🙂

2 thoughts on “Bull Beef Kill Out”