I’m not sure why but I detest being called ‘Mammy’. ?’Mama?’ is the Irish for Mummy or Mother so I guess that is where the word Mammy came from but when I knew I was pregnant with Will, I decided that I’d be called anything but Mammy even though it seems to be the norm here in Ireland. I called my own mother ‘Mammy’ until I started secondary school and then it became ‘Mum’. 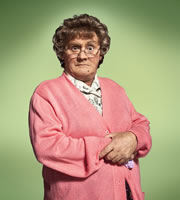 Mrs. Brown – perhaps the most infamous of Irish Mammies.

Meeting a friend for a game of bowling with the kids a couple of weeks ago, I was amused the first time when I overheard him chatting to the kids and referring to me as ‘yer mammy’. When I heard it the second time though, I could stand it no longer and teased ‘ You’re sounding a great culchie, you Dub!’ to which he replied ‘I thought you were all mammies down the country’. ?Not in Garrendenny!!

Colm O’Regan, an Irish comedian, has included the Irish Mammy in a comedy sketch show and is launching a book this autumn – all the things an Irish Mammy incorporates and I try to pretend I don’t possess any of them!

The kids started off calling me ‘Mummy’. They never really called me by my first name (apparently I called my parents by their first names until I was about 5 being the eldest). Will now calls me ‘Mum’ and Kate calls me anything from Mum, Mummy, Mom, Momma, Mommy, but never Mammy I’ve noticed.

Luckily, they haven’t noticed that if they wanted to irritate me, they could do so by calling me ‘mammy’. Will knows that calling me Mrs James drives me mad so he’ll taunt me with it if I’m nagging him to tidy his bedroom or empty the dishwasher!

What do your kids call you?