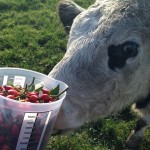 Who’s a Perfect Farm Wife then?

One of the disadvantages of writing a book entitled How To Be A Perfect Farm Wife is that I’m constantly being teased by the family when I fail. I’m not precious about it, I describe my house as a home rather than a house. As I sit typing this in my living room with the laptop on my knee, we’re all nice and cosy in front of a log fire. I emptied the ashes today so there is a good covering of dust over the mantelpiece that I haven’t cleaned yet. My son took out multiple sets of lego over Hallow’een so it’s taking up a sizeable chunk of the floor. He has a couple more things to make, then he will play with them all for a week and then put them away again. He gets more fun out of making them so will do the same again at Christmas. 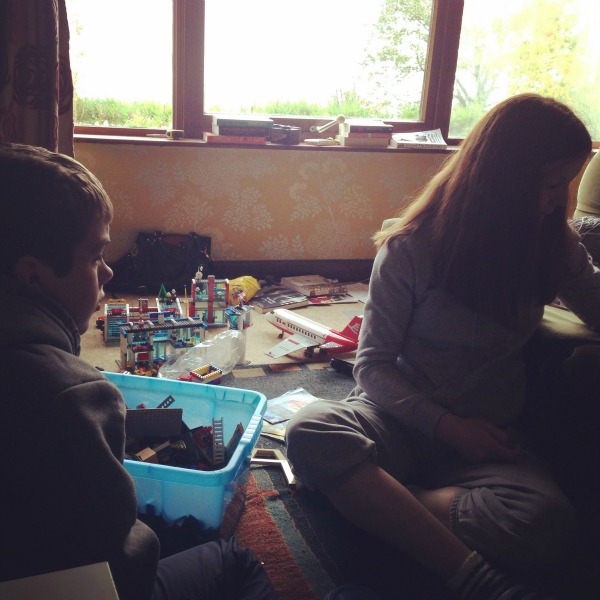 As the kids get older, I love to see the lego out as I know it won’t be happening for that many more years. Yes, I’m hugely relieved that he wants lego again this Christmas! Any more mess? Yes, my daughter brought down her Sylvanian houses over Hallow’een so they are taking up another corner. I need more bookcases so there are stacks of books on windowsills in various rooms too! I also have have a bag of crochet and wool lurking near the window. It’s certainly got a lived in look.

There’s something very satisfying about foraging. Finding food that is free and making a tasty dish from it. All perfect farm wives must forage – it’s one of the essentials.

We made crab apple jelly for the first time two weeks ago and not only did it look clear but it set!  I’ve always thought that it was really difficult to make and indeed, my mum always got a couple of jars from a friend rather than make it so I was a bit sceptical regarding whether it would work it out. I used the Good Food recipe as it allows you to use any quantity of crab apples – you measure the sugar according to the amount of liquid produced from the crab apples. I used a pillowcase to strain the juice from the fruit and it worked perfectly. It made 6 jars plus one mini jar, it set beautifully and it tastes absolutely scrumptious. We don’t have many crab apples this year so that’s it for this year but I’ll definitely be making it again. 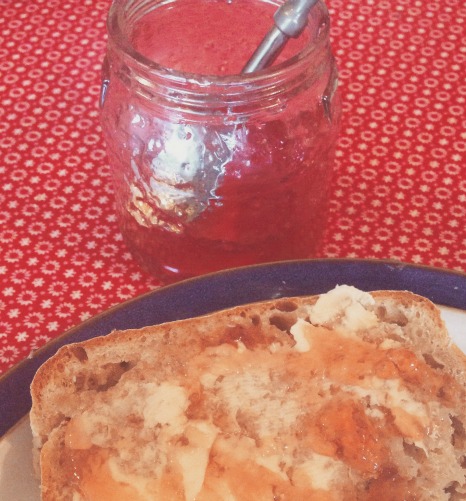 With that success in mind and seeing a recipe for Rosehip Jam in a copy of Country Living magazine, I decided to have a go. It looked fairly easy, I was surprised at the small amount of rosehips in the recipe, surely 500 grams wouldn’t make much jam but I could always double or treble it. Off I headed on a sunny day to herd the calves and pick a jug of rosehips – easily done as long as you have a scissors as there’s plenty of thorns! 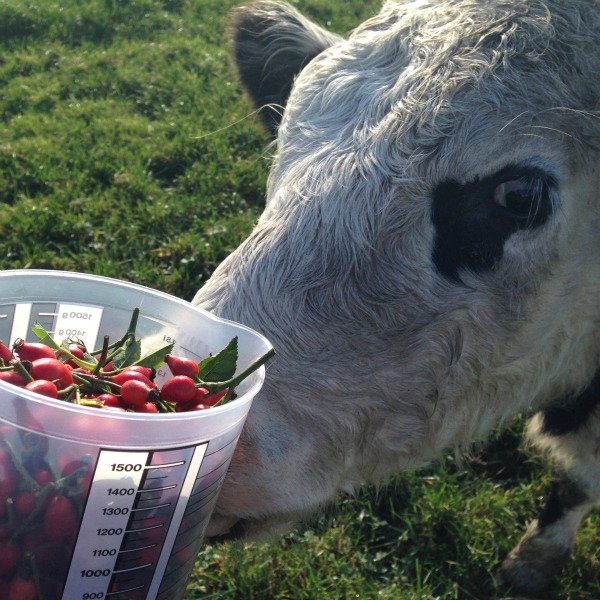 On closer inspection of the recipe however, I realised that I had to deseed the rosehips! I did wonder if I could chance making the jam without deseeding them but apparently the seeds have fine hairs which can really irritate the throat and one Facebook follower revealed how, as kids, they used them as itching powder! Enough said!

On Sunday afternoon, I sat down to watch a film and to deseed some rosehips. Each rosehip had to be topped and tailed and then I crushed them with the blade of the knife and scraped out the seeds. Yes, my fingers became covered with lots of short fine hairs. After 90 minutes, I weighed the rosehips deseeded so far.

Life is too short. I gave up on perfection and decided that I would stick them into the freezer until I get the pectin to make rosehip jelly.

This recipe for rosehip cordial doesn’t mention deseeding them so maybe I’ll give it a go. I need to get pectin before making the rosehip jelly as apparently rosehip have little natural pectin. I don’t have any crab apples left to combine them with the rosehips.

It has been a fabulous autumn with the good weather lasting to last weekend. It was lovely to go and herd and see the cattle basking under the dappled shade of trees. 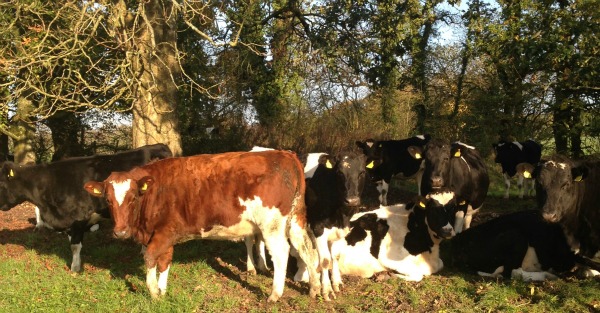 However, it has been quite wet here this week so the cows are in most days, the maiden heifers are in the sheds, we dosed the heifer calves during the week and put them in and the rest of the bullocks to be fattened will be brought home from the outfarm at the weekend and then housed.  We always hate the adjustment from having all the stock out to putting them indoors and having to feed them. Most of the cows will be milked for another 3 weeks so the cubicles have to be brushed and spread with lime after each milking to limit the risk of infection.

From having lots of farm kittens born this summer, we gave away a couple, a couple have disappeared with their mother (moved on I guess), one was killed by a lorry and there’s a couple of very friendly Toms. These are two of a litter that we were able to handle from an early age and to be honest, it’s a pain. Most other farm cats are a little wary of us, happy to see us in the distance and receive food and steal milk but they don’t get close. These two twist around our feet and one of these days, one of them are bound to send me flying. What is funny though is their relationship with the farm dog. He is accustomed to cats being wary of him, running from him and he has had many a stand off with a brave cat as it spit at him and he barked at it. 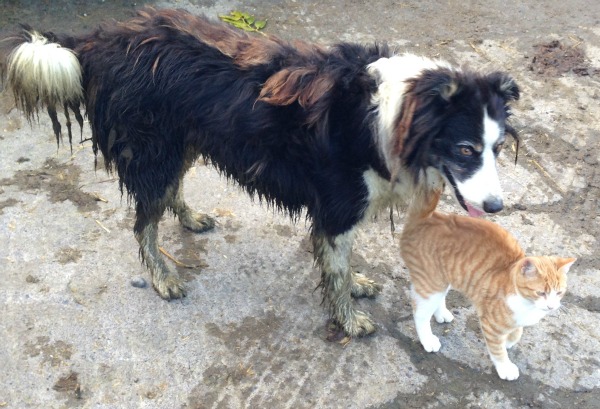 However, these cats believe that the dog is there to play with, to rub against, to play with them. Sam just looks at them in total bemusement. 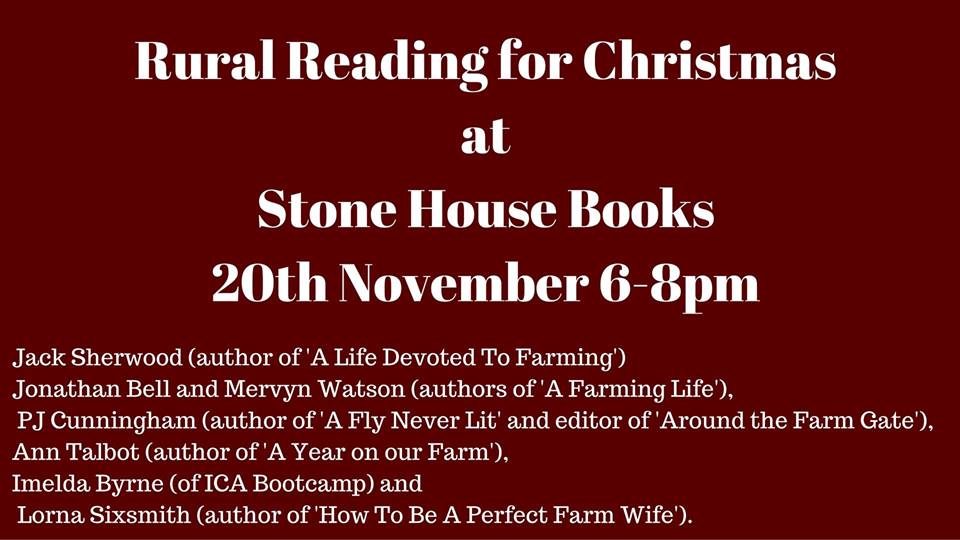 If you’re within driving distance of Kilkenny, are looking for some good books as Christmas gifts and would like to meet authors of farming / rural books, come along to Stone House Books in Kilkenny on 20th November 6-8pm for a meet and greet with six authors plus Imelda Byrne of ICA Bootcamp fame. It’ll be a lovely evening and you can also hear all about it on KCLR 96FM on Thursday 19th Nov at 7pm.

That’s all for this week – if you have ever attempted to make rosehip jelly or jam by the way, do let me know how it went.